A pretty girl and her friend are playing in a quiet spot some ways from home. Unbeknownst to them, they are being spied on by a male figure in the bushes. At length he emerges — the friend shrieks and runs away, but the pretty girl holds her ground, even though she’s frightened.

This is how Odysseus meets Nausicaa in Homer’s Odyssey. It is also how Severus Snape meets Lily Potter in J. K. Rowling’s Harry Potter and the Deathly Hallows — perhaps the only YA fantasy ever to open with a quote from Aeschylus’ Libation Bearers:

Oh, the torment bred in the race,
the grinding scream of death
and the stroke that hits the vein,
the hemorrhage none can staunch, the grief,
the curse no man can bear.
But there is a cure in the house,
and not outside it, no,
not from others but from them,
their bloody strife. We sing to you,
dark gods beneath the earth.
Now hear, you blissful powers underground —
answer the call, send help.
Bless the children, give them triumph now.

Once you start looking for ancient Greek parallels in Harry Potter, they show up everywhere.

Harry lives in a world described by prophecy and teeming with creatures pulled from classical myth: centaurs, spirits, basilisks, phoenixes, hippogriffs, and three-headed watchdogs. Circe and Mopsus appear on Chocolate Frog cards. Even the Sphinx makes a cameo appearance in Goblet of Fire.

On a more technical level, many of Rowling’s central characters have epithets, words or phrases that grow stronger with repetition until they attain an iconic resonance. Athena in the Iliad and Odyssey is often described as grey-eyed; in much the same way, Harry has green eyes — specifically, his mother’s eyes. There is Voldemort’s high, cold laugh and Dumbledore’s half-moon spectacles. 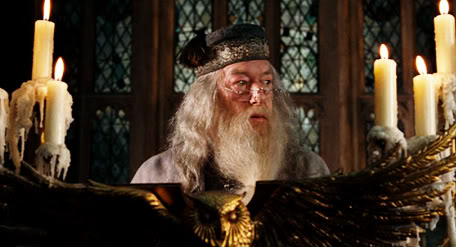 But it’s in the themes of Harry’s story that Rowling is most powerfully in debt to Greek epic and tragedy. The classical framework illuminates two otherwise puzzling aspects of the Potter universe: what is the significance of blood, and why is there no sense of religion in the wizarding world?

Let’s start with the death of Dumbledore.

To anyone familiar with Greek literature, Dumbledore’s funeral may as well have featured a witch on a broomstick writing CHTHONIC HERO in ten-foot letters across the sky. A king or champion is laid to rest, and the grave makes the land hallowed and uniquely powerful. Dumbledore’s white marble tomb, with the pyre set alight by a phoenix and the appearance of centaur archers, is the same as the funeral of Hector, who died defending his towered city; the burial-place of Oedipus, old and wise, who makes victorious the land that accepts his body; and especially the sacred tomb of murdered Agamemnon, where the victim’s children plan their revenge.

Which brings us right back to The Libation Bearers.

The lines Rowling lifted from Aeschylus makes it plain that blood is both a curse and a cure, miasma and numen. The children of Agamemnon have a dilemma: if shedding kindred blood is evil, then how are they to take vengeance on the mother who slew their father? In one way, Harry’s problem is simpler: he does not have to choose between his parents. But he still must find a way to defeat an enemy with shared blood in his veins, blood that has been hallowed by Lily’s sacrifice.

To make things more complicated still, in the wizarding world there is a tension between the idea that Muggle-born wizards are no different than pure-bloods (meaning blood is unimportant) and the fact that Harry’s mother’s blood is his most powerful defense (meaning blood is hugely important).

What that Aeschylus quote helps illuminate is that it is not the purity of blood that matters, but what happens when blood is spilled by or for someone else.

Of all Rowling’s characters, Dumbledore best understands that blood’s great power does not come from some innate quality, but in blood’s ability to bind people even beyond the bounds of mortal death. Voldemort, on the other hand, fundamentally misunderstands this power of connection, as Dumbledore explains to Harry:

He took your blood believing it would strengthen him. He took into his body a tiny part of the enchantment your mother laid upon you when she died for you. His body keeps her sacrifice alive, and while that enchantment survives, so do you and so does Voldemort’s one last hope for himself.

Voldemort’s mistake is to think that shedding the blood of others will increase his power. In fact, it increases his enemies, as many of Voldemort’s victims have families and loved ones whose grief motivates their struggle against him. As in Aeschylus, there is a moral imperative to avenge a slain or injured relative. It’s as though kindred blood-ties become more activated by violence. This is why Narcissa Malfoy undermines Voldemort’s plans, why Neville refuses to join the Death Eaters and slays Nagini, why Aunt Petunia’s blood is capable of protecting Harry during all those summer breaks between books. 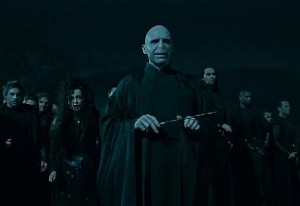 In this context, we can see the phrase ‘blood traitor’ as a red herring. Being related is nothing: all the pure-blood families are related, we are told. It is the spilling of blood more than the sharing of it that matters in the wizarding world. To shed blood by murder or to die in someone’s defense are both far more potent acts than simply existing in the same kindred network.

And this same connective power of blood allows Harry to be guided by those he has lost. In both Goblet of Fire and Deathly Hallows there are scenes where Harry is surrounded and supported by his dead parents and other victims of Voldemort. Both scenes also involve the shedding of blood: Cedric Diggory’s death and several jarring deaths during the Battle of Hogwarts. This is a remarkably clear parallel to the nekuia in the Odyssey, where Odysseus pours out blood for the dead to drink while he converses with them.

The blood link is Harry’s greatest asset against his nemesis. It is also the key to Rowling’s moral universe.

Where Do Bad Wizards Go When They Die?

Harry Potter is surrounded by the dead — the ghosts at Hogwarts, moving photographs and portraits, resurrected spirits, loved ones lost, and memories experienced in the Pensieve. And yet, aside from one conversation in Order of the Phoenix, very little is said about the afterlife. Capital letters are implied: when they die, wizards Move On to Some Other Place in the Beyond. There is no discussion of wizard heaven or wizard hell, or what Harry would have to do to end up in one rather than the other.

And really, should there be? Saintly behavior would not bring Harry’s parents back. Voldemort’s darkness will not be conquered by the shining purity of our hero’s spotless soul. Such an idea would diminish the agony and sacrifice of every wizard who fought him before Harry’s birth and afterward. And those sacrifices, Lily’s in particular, that define the ethical framework in which Harry grows up.

Because of his mother’s murder and the protection it gives him, Harry is both innately opposed to Voldemort’s brand of evil and uniquely positioned to fight it. Two decades of spilled blood cry out for vengeance, a palpable debt that only grows heavier as the series progresses. What Harry needs is not a list of abstract rules for virtue – witness the horrible absurdity of Dolores Umbridge’s I must not tell lies – but a concrete, practical sort of goodness. Harry constructs an ethical system around courage, loyalty, and altruism as an explicit response to his enemy’s cowardice, cruelty, and narcissism.

It’s pretty clear (in most cases) when a witch or wizard is good or evil, courageous or craven. And that moral status indicates something very substantial: whether or not the witch or wizard in question can be relied upon for help in battle. Good and evil actions have echoes not in the afterlife, but in the living world. Kinship is created out of a shared struggle and blood spilled for a common purpose. The Death Eaters have their brand, and Harry and his friends have their scars.

The greatest possible moral metric is how a witch or wizard copes with death. Lily Potter threw herself between her infant son and his would-be killer, even though she could have escaped with her life. Dumbledore engineered the precise circumstances of his death to protect as many people as possible for as long as he could. In contrast, Voldemort feared his own death so much he tried to kill a one-year-old boy. In a world predicated on courage and self-sacrifice, this is indeed the ultimate evil.

At the end, Harry bravely faces death — precisely the same death as Lily’s. “I’ve done what my mother did,” he tells Voldemort in Deathly Hallows. “They’re protected from you.” Harry’s reenactment of his mother’s sacrifice succeeds because he intends to die. And what he finds is not an afterlife, but a crossroads: he can Move On and be at peace, if he likes, or he can return and make certain that his enemy is conquered.

Harry chooses to go back and fight. There’s nothing more classically Greek than that.

This reading is not intended to suggest that Harry Potter is a pagan throwback completely free of Christian themes. (Because we could have a pretty long discussion about faith and martyrdom and Harry/Dumbledore/Snape, if that sounds fun!) But it is astounding to look away from the Christian lens and see Rowling borrow from classical texts to build a credible, complex system of ethics without reference to the rewards or punishments of the afterlife. It is marvelous to read a story where life and death really, deeply matter in this world and not the next.

Voldemort’s great weakness, as Dumbledore tells us, is that nobody’s death matters to him but his own. The great strength of Harry and the other heroes is that they feel death’s power but do not fear it. They shed blood on behalf of those they love and defeat evil. They find the cure in the house.

Alicia Aho never uses one sentence when there’s room for a second. She also writes historical romance under the name Olivia Waite. 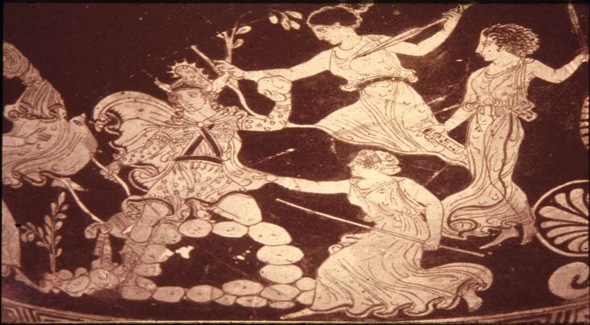 [Does Harry’s triumph over Voldemort break the cycle of death and vengeance? Will the Furies create a new form of government where the muggles can exert influence over wizards, like they did at the end of The Eumenides? Sound off in the comments! – Ed.]

19 Comments on “O Goddess, Sing the Rage of James and Lily’s Son, Harry”