[Blanket Spoiler Alert for Contagion. Not that it’s really the type of movie that’s prone to spoiling, but nevertheless, consider yourself notified.]

I like movies about the apocalypse. More specifically, I enjoy seeing the collapse of Western Civilization play out on screen, whether it’s the result of zombies, global warming, SkyNet, or, in the case of Steven Soderbergh’s new thriller Contagion, infectious disease. Contagion is the latest in a long line of stories that we tell about our own demise to explore the fragile state of our way of life.

It isn’t one of those stories. In spite of the visuals in the trailer that suggest societal collapse–angry mobs, overwhelmed emergency rooms, uncollected garbage–the social fabric remains intact. Vaccines are distributed in an orderly, chaos-free manner. The mob scenes from the middle act of the movie give way to an eery sense of calm and isolation. The teenage girl gets an ersatz “prom” in her living room. The same teenage girl who can text on her iPhone throughout the movie because the cell infrastructure remains intact throughout.

I wasn’t necessarily disappointed by this outcome, but I was definitely not expecting it based on the trailer and the first half of the movie. Consider the following from the movie:

These are all unmistakable signs of a breakdown of law and order. The powerful forces in our society that keep such behavior in check–threat of state violence and social norms–are overwhelmed by the desperation of those who feel they have nothing to lose.

And yet, about halfway through the movie, the chaos starts to give way to an uneasy sense of authority and order. Where does it come from? 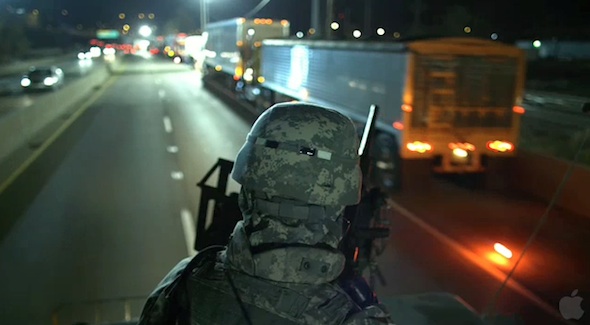 The military enforces the closed state borders. The military keeps the queues at the vaccination centers orderly. The military preserves law and order when all other methods of preserving it have failed.

The fact that the military plays this role is far from surprising. But it also goes almost completely unexamined in a movie that was otherwise fairly adept at examining the myriad effects of a catastrophic disease outbreak on our society. Fortunately, when the movie ends, the Overthinking begins. Let’s speculate on a few of the issues that should have been at play based on the events of Contagion.

Keep in mind that the same forces tearing away at society at large would also be at play with the military. Large numbers of troops would be keeling over and dying, and those that weren’t getting sick would certainly be hearing about their civilian friends and family succumbing to the disease. Would the military be hit by the same 25% reduction in capacity that the police were? Perhaps not, particularly among active duty personnel, but what about reservists called up in the thousands? How many would ignore the call and choose to stay with their loved ones? Probably more than a few, given the fact that mild mannered Matt Damon felt the need to arm himself.

And once those troops were assembled, how would they show the force required to keep the desperate mobs in check? Would they heed orders to fire on civilians? An even if they did, would it matter? Consider the tense border scene in which Matt Damon yells at the soldier, “I’m not sick!” There were hundreds, if not thousands, of similarly angry and upset people behind him. Enough to possibly overwhelm a small military outfit, even one that chose to fire on a crowd.

Ultimately, though, Contagion is a movie about The System working well enough to pull humanity through the crisis, even if at times The System seems to be inadequate to the task at hand. If the desperation dial must go past a certain level to give enough people the feeling that they truly have nothing to lose to overwhelm any and all shows of force, then Contagion kept that dial below that point, wherever it may be.

But this, to me, was the most interesting thing to consider about the scenario presented by Contagion: how close were they to that line? What were the individual decisions that soliders up and down the hierarchy made that prevented society from breaking down, when that’s clearly where things were headed without their intervention?

And most importantly, how did the military keep the hand sanitizer supply lines running to their troops? 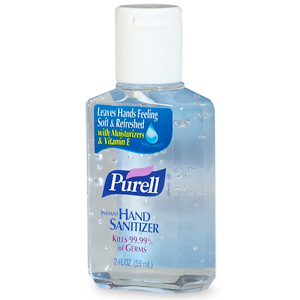 So many unanswered questions. But that’s what we’re here for! Duke it out in the comments. Would Contagion have been a more interesting movie if the role of the military were more closely examined (or examined at all)? Could the U.S. Military maintain nationwide martial law while a quarter of its members were dying of a real bad flu? And seriously, when the nation inevitably ran out of Purell, wouldn’t everybody have seriously freaked out?

13 Comments on “Overthunk: “Contagion” and the Rule of Law”