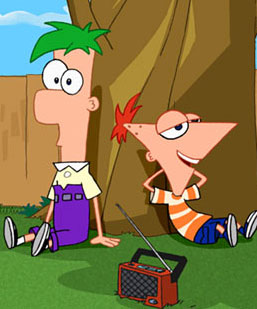 One of the pleasures of fatherhood is getting a second chance to enjoy Saturday morning cartoons. A good children’s show can be just as much fun for the grownups as it is for the tots. (If you don’t believe me, you need to YouTube up some Pee Wee’s Playhouse.) As recently as college, I was on a five-days-a-week Pokemon kick, and I remember loaning a DVD of Invader Zim to that cute girl in my Lit 210 class. (If she’s reading this, I want it back.)

Recently, I’ve been rediscovering the joy of coming home from work, flopping onto the couch, and putting on a show where 80% of the ads are for breakfast cereal. We live in an age where television is reaching new heights of complexity and sophistication. But man can not live by Game of Thrones alone. Sometimes, you just want 15 minutes of cornball humor and slapstick. For that, let me recommend Phineas and Ferb.

P&F takes place over summer vacation, during which the titular step-brothers embark on an endless series of fantastic projects. They build a spaceship. They build a rollercoaster. They build some kind of soccer stadium that warps gravity so they can run up the walls. In classic cartoon fashion, the parents are never around to see any of this, which drives their older sister Candace crazy. Her mission in life is to “bust” them, proving once and for all that they really are building mind-boggling feats of backyard engineering. (“Mom!” she shouts at the end of the open credits, “Phineas and Ferb are making a title sequence!”) Interestingly, the boys never seem worried about Candace’s threats to bust them, and make no effort to hide their inventions from anyone. They don’t seem to comprehend that anyone would have a problem with their projects. “Aren’t you a little young to be doing this?” asks a construction worker delivering a flatbed of i-beams. “Yes,” says Phineas honestly. “Yes we are.”

(This isn’t the point of the article, but I have a theory about why Candace is so determined to bust the boys. Phineas and Ferb are step-brothers, a fact that’s made very clear by Ferb’s thick British accent. But clearly, they’re inseparable soulmates. They never want to spend the day playing with her. They’re always working on some invention that she doesn’t know the first thing about. I think Candace feels like Ferb stole her brother, and her step-dad stole her mother. The remarriage created two close family pairs, leaving Candace as the fifth wheel. Her attempts to undermine Phineas and Ferb are really attempts to open up a space for herself in the family, by prying those two apart. But on a less overthinky level, Candace is supposedly inspired by Jennifer Grey’s character from Ferris Bueller’s Day Off.) 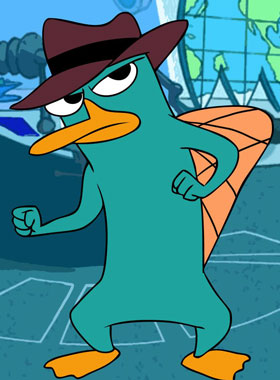 Okay, there are plenty of cartoons about kid inventors with limitless engineering skills and resources. Off the top of my head, there’s Dexter’s Laboratory, Codename: Kids Next Door, and Jimmy Neutron: Boy Genius. But what distinguishes P&F is that in every episode, there’s a secondary plotline involving the boys’ pet platypus, Perry. Unbeknowst to them, Perry is a secret agent who does daily battle against a mad scientist named Dr. Doofenshmirtz. Doofenshmirtz is always threatening to take over the tri-state area, with the aid of his something-inator. My favorite: the “If-A-Tree-Fell-In-The-Forest-Inator,” a ray gun which makes anything it hits fall over and whisper “Doofenshmirtz.” Perry is always temporarily captured, then escapes just in time. In the ensuing fight, the -inator of the day fires randomly, accidentally hitting whatever the boys have been working on. This usually results in it disappearing just before mom shows up. (Since you’re curious, the If-A-Tree-Fell-In-The-Forest-Inator knocks down a tree in front of a bus carrying a professional soccer team, which then detours to Phineas and Ferb’s house. The boys are playing in their gravity-bending soccer stadium, which they gladly give to the players as a gift.)

The important thing to remember is that the boys never learn that Perry is a secret agent, and they never learn that Doofenshmirtz even exists (except in the TV movie, which involves parallel universes and doesn’t count). In other words, just as Phineas and Ferb have a secret life their parents don’t know about, Perry has a secret life that the boys don’t know about. This reminds me of Fraggle Rock. There’s the crochety old human, whose poor dog is always trying to convince him Fraggles exist. Meanwhile, the Fraggles are constantly ducking the giant Gorgs (who consider them radish-stealing pests). And the Fraggles coexist with the Doozers, even smaller creatures who are always building intricate, mysterious structures. There’s a sense of multiple worlds revolving around each other, but never quite meeting.

Here’s an interesting detail about the Perry subplots: while the boys live in the suburbs, Doofenshmirtz has his headquarters on top of a big skyscraper. Perry actually has to commute to the city in order to fight him. This is very grownup of him, right? I almost feel like Perry is a stand-in for the boys’ parents, who are (by necessity) largely absent. I’m sure your average six-year-old feels like grownups either don’t understand or don’t care about their kid games, just as they don’t really understand the adult world. That’s what it’s like to be a kid: you’re convinced you know more than adults give you credit for, but at the same time you’re aware of how much you have yet to learn.

What makes Phineas and Ferb work is the boys’ kidlike myopia about the world around them. They focus on the game they’re playing, and miss the fact that the world’s greatest secret agent is literally living under their roof. It’s the opposite of, say, Inspector Gadget, in which the grownup is always missing the big picture and the kid has to save the world. There are a lot of cartoons which fulfill the kid fantasy of outsmarting the adults. But Phineas and Ferb never try to save the world; they let the world take care of itself, and focus on having fun. That’s a lesson kids and their parents can take to heart.

8 Comments on “Phineas and Ferb: The Myopia of Childhood”