The song “Baby” by Justin Bieber is, to say the least, polarizing. It elicits shrieks of joy from 14 year-old girls and groans from, well, most other people. Those who fall into the latter camp often say they can’t understand the appeal of this song and its immense popularity. I don’t blame those who have that reaction. On the surface, it’s a crushingly generic pop song, both musically and lyrically. The Ludacris rap interlude comes way, waaaay out of left field. Bieber’s vocal delivery, though competent, is nothing to write home about.

In other words, it’s perfect for Overthinking.

I thought about writing a fairly extensive piece of analysis that looked closely at both the music and lyrics, but I came up with a more interesting way of subjecting this song to a level of scrutiny it probably doesn’t deserve:

I’m going to cover this song in as many genres as possible.

Ladies and gentlemen, welcome to “The ‘Baby’ Project.”

[Updated 8/21: By popular demand, MP3 download of the song is now available.]

The original “Baby” is a slick, highly produced dance pop song with Autotuned vocals, drum machine beats, and shimmering synthesizers. Part of the idea behind “The ‘Baby’ Project” is to strip these elements away and cast the same musical raw materials (melody, harmony, and rhythm) into a completely new setting to better understand the sonic makeup of the original.

Its harmonic structure in particular lends itself very well to cross-genre export, as it’s brain dead simple: I-vi-IV-V, or for those who aren’t versed in music theory, the same chord progression that powers countless hit pop songs, from “Unchained Melody” to “Total Eclipse of the Heart.” The song does not deviate from it at all; unlike most other pop songs, there’s no bridge section to keep it from getting too monotonous (the rap accomplishes that function, but we’ll come back to that later). It just plows relentlessly along, those same 4 familiar chords. It’s the complete opposite of something like a Radiohead song which, is about as harmonically adventurous you can get without leaving the realm of “popular music.” 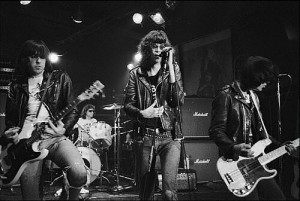 "Blitzkrieg Bieber Bop" should be a song. Someone should get on that. Oh, wait...

This simplicity is one of the main reasons why I chose punk as the first genre in which to recast “Baby.” It’s a genre that’s practically defined by its lack of harmonic complexity. The Ramones famously recycled the same 3 or 4 chords across over a dozen studio albums.

Melody-wise, it’s not quite as natural of a transition, particularly in the chorus, when the high “ooh”s and “noo”s punctuate the lower “baby, baby, baby”s in a way that you’d rarely find in punk. This, to me, is one of the defining charactersics of “Baby” and what makes it stand out enough for it to be a monster hit. It’s actually kind of clever in the way it accents the emotion with the first “ooh,” then pushes it even higher with the second “noo.”

Maybe it’s just my vocal delivery, but I think those high interjections sound out of place in the punk version. I wasn’t going to change it–part of the idea of The “Baby” Project is to stay as close to the original as possible–but if I were trying to just make a good punk song, rather than a faithful punk reinterpretation of this song, then I probably wouldn’t have thought to do such a thing with the melody.

I did, however, choose to leave out one crucial part of the sound: the synth countermelody that you hear in the chorus. Like those high “ooh”s and “noo”s, this part of the music helps push this song from merely competent to notable enough to become a hit. I couldn’t think of a way to translate the exacting precisison of the synth with an instrument that wouldn’t have been out of place in the punk context. If you can think of a way it could have worked, let me know in the comments. 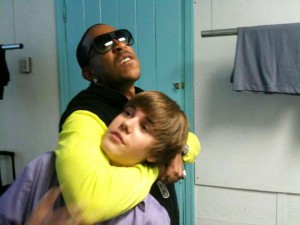 Um, it was the first Google Image Search result for "Justin Bieber Ludacris."

And that brings us to the rap. The utterly bizarre, out of place, and dare I say, ludicrous Ludacris rap interlude. As I mentioned before, it functions as the song’s bridge–a break from the verse-chorus repetition–but thematically, it goes beyond that. Ludacris is here, I suppose, to lend his “edginess” and “cred” to the 15 year old child trying to break into the music business. But he does so by…rapping about playground love among 13 year olds? It’s wrong on so many levels, but like everything else in this song, it gets the job done, and then some. It serves its purpose as the bridge, and its utter weirdness again helps take the song over the top from forgettable to notable, just like the high peaks in the melody and the synth countermelody.

The one thing the original has that the punk version can never have is the obvious connection of the rap lyrics about young love to the young singer and his young target audience (“When I was thirteen”). Divorcing this song and these lyrics from Justin Bieber turns the rap into pure kitsch. The accelerated tempo of the punk version (Ludacris speed?) doesn’t help either.

So is it just kitsch? Or could you possibly imagine an alternate universe in which this song somehow made its way to a pop-punk group instead of Justin Bieber? Or is there something about the artist and his delivery that’s exceptionally well suited to deliver this song and that’s lacking from my punk rendition?

While we discuss both the original’s merits and that of the punk version, I’ll be busy recording Part 2: the Country installment of The “Baby” Project. After that, it’s a bit up in the air, so I’m open for suggestions on additional genres. Let me know in the comments!