In the universe of Fullmetal Alchemist: Brotherhood (Brotherhood), trained alchemists harness their ability to destroy and recreate life in order save, kill and unleash all sorts of terrifying creations. Homunculi, evil human dolls, are born when an alchemist attempts to bring a human back to life. Each homunculus, named after one the seven deadly sins, represents a sin, and each acts according to it.

Except for Lust. Sure, she looks the part: a tiny waist, a breathy voice, breasts that defy gravity. But she typically utters only words of disdain or disinterest. She acts as Gluttony’s keeper, constantly giving him permission to consume living humans. Perhaps Lust has gone the way of so many women, controlling her appetite instead of pursuing illicit affairs. 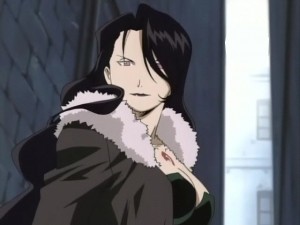 But why isn’t Lust lustful? Doesn’t it go beyond clichés about female characters and sexuality?

At first glance, it appears the lack of lust in Lust symbolized the particularly evil or benign nature of the sin. But, after closer inspection, that isn’t the case. At least, not quite. Lust acts without lust, because in Brotherhood, lust does not exist. Love does not exist. Not romantic love, as we typically know it and see it in anime. In Brotherhood, there is only friendship and the jump to the deep, committed love of long-term partners. None of the slow build-up, the simple flirting typical of anime.

Protagonist Edward Elric falls for Winry, the pretty blonde girl who lives next door. They develop their feelings slowly, while in separate rooms accomplishing more important tasks. When Ed finally declares his love, the two do not kiss or embrace. Instead, Ed steps onto a train, off on a solitary adventure. He could be gone for months or years but Winry doesn’t mind. She knows he’ll be back. They’ll stay together, get married, have children. 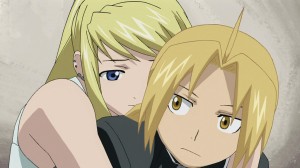 A similar relationship occurs between flame alchemist Roy Mustang and his personal assistant slash bodyguard, Riza Hawkeye. Mustang trained under Hawkeye’s father and fought alongside her during the war. He gave Hawkeye orders to shoot him if he ever steps off the path of righteousness. Though their relationship lacks any physical passion, the pair heads towards commitment. Hawkeye always stands by Mustang’s side, staring at him with eternal devotion.

Unlike other characters, Mustang is quick-tempered and vengeful. His passionate side makes its first appearance when he kills Lust. In a confrontation between Lust and Hawkeye, Lust incorrectly says that she’s killed Mustang. Hawkeye drops to her knees in tears, frozen in misery. Lust is about to kill her when Mustang appears. He shoots flames at Lust, burning her over and over until she finally expires.

No other character serves as an appropriate foil for Lust. She dies by Mustang’s hand because he’s the only character full of passion, anger and his own lust for power. Late in the series, Mustang almost takes his vengeance too far. Homunculus Envy reveals that he killed Mustang’s good friend, Maes Hughes. A furious Mustang attacks Envy until the homunculus teeters on the brink of death. Just as Mustang is about to kill Envy, Hawkeye points a gun at his head. If Mustang kills Envy, if he allows hatred to consume him, she’ll shoot. Mustang steps away and releases his anger.

Passion leads Mustang down the wrong path. It forces Hawkeye, his platonic life partner, to step in and threaten to end his life. If Mustang succumbs to the temptation of vengeance, his life is over. Even if Hawkeye lets him live, he’ll become a hateful, petty ruler — far from his dream of ruling the country with logic and justice. 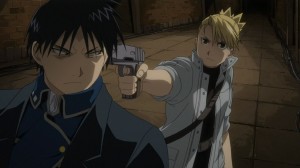 The country, Amestris, suffers from its passion. Amestris pursued hatred to the point of genocide. As we learn in flash backs, the soldiers helped slaughter Ishbalans. Like many cases of genocide, an evil ruler orchestrated the pointless slaughter. In this case, the ruler was the original homunculus, the Dwarf in the Flask Homunculus. He organized the bloodshed to create a giant transmutation circle. He uses the circle, and the souls of every living human on the planet, in an attempt to consume and become God.

The Dwarf manipulates hundreds of leaders, thousands of soldiers. He invokes the hatred necessary for genocide without struggle because the Amestrian people lack reason. They allow their stored anger to explode in support of a meaningless war with no purpose but the destruction of an entire race. 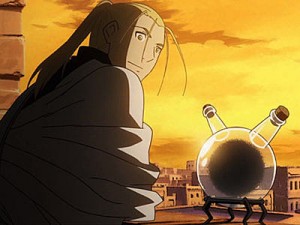 The characters in Brotherhood lack lust, and love, because within the universe, unchecked passion always leads to destruction. The protagonists recognize this and place limits on their desire. Ed refuses to use a philosophers stone to swap his metal arm and leg for the flesh he lost; Mustang would rather die than rule with vengeance.

But lust cannot be controlled. It is a thought not actions, and there is no way to extricate it from the mind. Either Mustang wants a physical relationship with Hawkeye or he doesn’t. There is no halfway, no in between. And love, romantic love, goes far beyond lust. It swoops a character off his feet, making morality or external desires seem insignificant. The characters of Brotherhood lack love because it is incompatible with their goals. Love is unchecked passion in its purest form. The characters skip straight to long term, platonic love. The love of an old married couple. An accepting, rational love. A love that could never lead to ill-fated actions like rape, murder or genocide.

Crystal Kaba is an agnostic, feminist vegan living in Los Angeles. She is currently pursuing a career as a screenwriter. 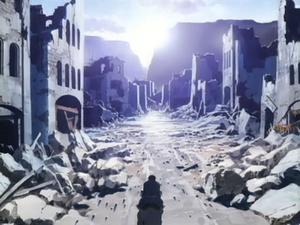 [Will love tear us apart? Can real romantic love exist without lust, even in Amestris? Sound off in the comments! – Ed.]