Everyone remembers the first time they played Animal Crossing. You’re riding a train, getting ready to start a new life in a new town, when a friendly stranger sitting across the aisle starts talking to you. Upon learning that you haven’t put a lot of planning into this move – you don’t have a job or even a place to stay lined up – he decides to contact a “friend” who can help you out. Sure enough, as you exit the train, there’s Tom Nook, waiting to make you an offer you can’t refuse – a house, a line of credit with which to buy it, and a job working at his store to pay off the debt you now owe him. 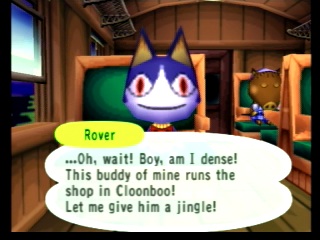 Rover is what con artists call a 'roper'.

The game never gives you a choice in any of these matters. Within a few minutes of playing, you’re saddled with a mortgage on a house you were forced to buy and pressed into indentured servitude to pay it off. Should you ever succeed in paying off that initial debt, Tom Nook immediately starts insisting on making upgrades to your house, without giving any indication of just how much these improvements will cost until after the work has been finished. The first upgrade, a modest expansion of your home, costs more than seven times as much as the original price of the house. Clearly, Nook’s goal is to keep you indebted to him for the rest of your life.

This is a racketeering scheme with overtones of sharecropping, isn’t it?

Many gamers seem to think so, as countless articles have been published exposing the dark machinations at play in what, on the surface, appears to be a cute, kid friendly game. IGN even went as far as to name Tom Nook one of the Top 100 bosses in video games. 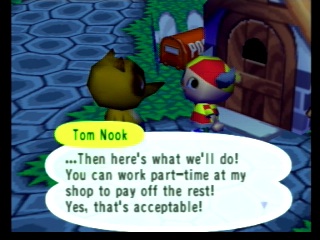 Did you read the fine print?

And it would appear to be so, until you look closer at the economics of Animal Crossing.

The first indication that things aren’t nearly as dark as they seem comes from the brief time spent working at Tom Nook’s store, Nook’s Cranny. Tom has you complete a series of basic tasks for him, all of which take about 20 minutes to complete, and to compensate you for this labor, he pays you a total of 1,400 bells (bells are the game’s currency). Given that the initial cost of the house was 19,800 bells, we can determine that Tom has paid you about 7% of the cost of a house for less than a half-hour’s worth of work. Seven percent might not sound like much at first, but you have to remember that it was for roughly 20 minutes worth of labor. You’re actually earning closer to 20% of the price of your house per hour, meaning that you could have the entire debt paid off before lunchtime.

It’s important to note here that Animal Crossing is set up to sync with time in the real world, so there isn’t any kind of dissonance between “game time” and “real time”, either. If you play the game for ten minutes and earn 1,000 bells, that activity took only ten minutes in the game as well.

This means that either Tom Nook sold you a house for next to nothing, or else he’s paying you thousands of dollars an hour to run his errands. It would be impossible to determine which without finding some kind of way of converting bells to real-world currency, and that is difficult because the world of Animal Crossing has drastically different values for various commodities than the real world (a nice sofa costs less than 200 sheets of paper, for example). At the very least though, we can determine that the price of real estate relative to your earning power while working at Nook’s Cranny is extremely favorable. In this light, Tom Nook’s insistence that you work for him seems a lot less like forced labor and much more like the kindly old raccoon is trying to do you a favor.

Of course, your stint working for Nook is relatively brief and after twenty minutes of raking in the big bells, you’re sent off to make your own way in town. This combination of unemployment and a mortgage would be terrifying, if not for the fact that Tom Nook is easily the most forgiving loan officer in the world. He suggests making a minimum payment of 1,000 bells a week – a paltry sum, by the way, that could easily be earned after a few minutes of fishing, hitting rocks with a shovel, or simply dug up out of the ground – but his real terms are essentially to pay what you can afford, whenever you can afford it, and only if you feel like it. Go a whole year without making a mortgage payment and you’ll never see so much as a threatening letter, let alone a foreclosure notice. In an era where banks are repossessing homes at record rates, it seems pretty unfair to vilify a guy who is essentially giving you a house for free.

If one considers the idea that Tom Nook thinks of the house as a free gift to you, his policy of forcing expensive renovations whenever you pay off his loans makes a lot more sense. In Nook’s mind, since the house was already free, the money that you “paid him back” gets reinvested into improving your house. Then he charges you a significantly higher amount for the next loan, because really, you’re not supposed to be paying him back anyway. The excessive costs are meant to discourage you from doing so. Should you continue to pay off these increasingly higher loans, he will continue to make even more elaborate improvements to the house, until he finally throws his hands up in defeat and erects a solid gold statue of you in the center of town and declares the debt settled. 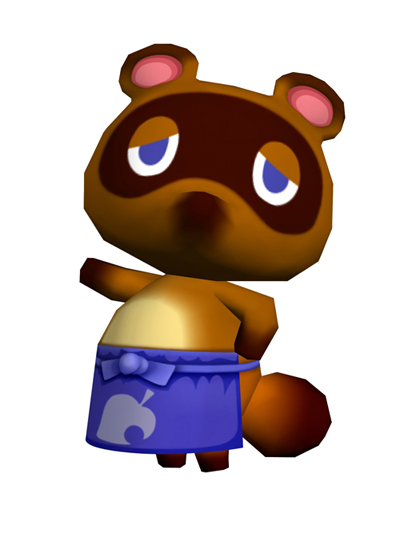 It would appear that you’re not the only one benefiting from Tom Nook’s generosity, either. Notice how few characters in the game have jobs. In fact, none of the game characters that are employed – such as the police officers, the Able sisters, or the postal workers – actually live in the town (an exception could perhaps be made for the museum curator, who appears to live at the museum). The rest of the residents, freed from the worry of paying to keep a roof over their heads, are freed to pursue whatever interests they have, such as fishing, walking around aimlessly, or talking about working out.

One might be tempted to label Tom Nook as a socialist. After all, he does own all of the real property in town and distributes it to the citizens in more or less equal shares. However, this theory of socialism falls apart when we consider that Tom Nook lacks the power of the state. He does not have the authority to pass or enforce laws, levy taxes or perform any other functions of a central government. Most significantly, he has a very powerful tool for controlling the other citizens’ behavior – he could threaten to take away their homes if they don’t submit to his whims – but voluntarily refuses to abuse this influence.

If anything, Tom Nook appears to be a libertarian, albeit a drastically different version than what we’re generally familiar with. Central authority in the game is extremely weak – the government has a very limited role, and the town’s mayor, Tortimer, is an aging, ineffectual figurehead who sleeps constantly and rarely makes a public appearance outside of holiday festivals. Without any real laws to enforce, the police take on the role of assisting the population by giving out information about the town.

However, instead of the “everyone fends for themselves” mentality that is generally associated with mainstream libertarianism, we instead have Tom Nook providing social structure and a safety net for everyone. Thanks to his generosity, nobody in the town will ever be homeless, because Nook sets everybody up in a house and continues to let them live there whether they pay him or not. And nobody in Animal Crossing will ever go hungry because… well, mostly because they don’t eat.

Compare this to Bioshock’s Andrew Ryan, a libertarian capitalist in the more familiar Ayn Rand vein. Ryan thinks of governments as “parasites” and considers altruism “the tool with which all that wickedness is built”. This outlook eventually leads him to build his own libertarian utopia, Rapture, at the bottom of the ocean, allowing only the best and brightest of society to join him. Ryan’s brutal policies eventually lead the city’s underclass to rise up in a civil war. In just over a decade, Rapture is in ruins, many of its citizens murdered, and nearly all the remaining survivors are insane, chemically dependent murderers.

Unlike Ryan, Tom Nook is able to create a successful, functioning society free of a powerful government, because he understands and embraces the importance of generosity and altruism in such a society. Admittedly, not building it underneath the sea probably helped, too. It is largely because of the sacrifices Tom Nook makes that the town in Animal Crossing is able to keep going the way it does, and us, not Nook, who are the true beneficiaries of this behavior. 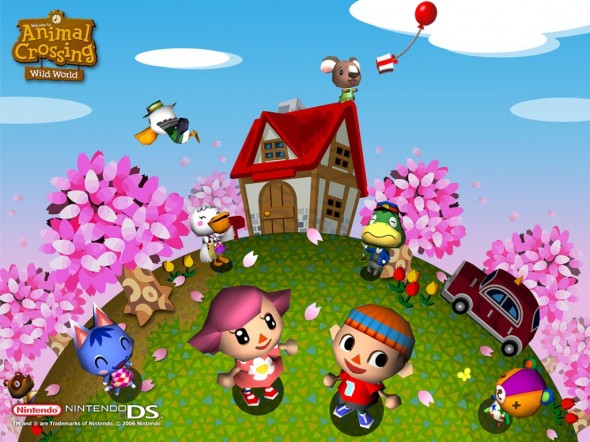 [Agree with Brad’s defense of Tom Nook? Do you have your own horror stories of debt slavery to a shirtless raccoon? Sound off in the comments!]

4 Comments on “The Invisible Paw: Altruistic Libertarianism in Animal Crossing”