I Am From … History!

If you want to understand a historical text, you need to understand not only the time period it depicts but the time at which the text itself was written. A story about the Vietnam War told in 1968 (The Green Berets) will differ from one told in 1978 (Go Tell the Spartans) or 1987 (Full Metal Jacket) or 2002 (We Were Soldiers). The events of the war itself haven’t changed, but the tone with which the authors approach it does.

This change of tone happens because (to quote Orwell once more) who controls the past controls the future. The past is a lens through which we evaluate ourselves and our choices. We give the events of the past higher esteem because they’re a complete tableau. We can look back on them and see a beginning, middle and end. In coming from historical events, and not mere fiction, we take them as “real.” The lessons of history, therefore, are lessons taught by reality. We ignore the past at our own peril.

There’s a Santayana quote I don’t feel doomed to repeat here; you see what I’m getting at. 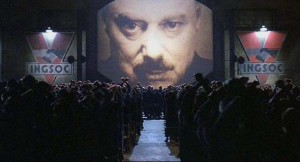 Between 2005 and 2011 we have a wealth of period dramas which examine historical eras through the lens of Blood, Tits and Scowling. Our stories of the American West come to us through John Wayne and Audie Murphy films. Our stories of the Roman Empire, the Tudor dynasty and Prohibition come to us from history class. Why would we want to return to these well-trod eras after so long? The past hasn’t changed. What’s the new angle?

The Birth of Tragedy

In 1872, shortly before Al Swearingen opened the Gem, Friedrich Nietzsche wrote The Birth of Tragedy From the Spirit of Music, a philosophical theory of art and drama. Nietzsche wanted to explore why the Greeks, still considered by many the founders of civilization, had developed the unique form of tragedy that they had. 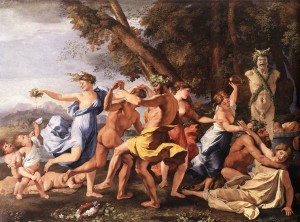 The Greeks, as founders of civilization (and even if they weren’t, that’s what scholars thought of them as in the 1870s), invented many of the tools and forms that enabled ancient humans to master nature. From them we get cartography, coinage, plumbing, gears, central heating and the gimbal. We also credit them with the formal methods of reasoning and rhetoric as laid down by Socrates and Aristotle. The Greeks made sense of the world around them, using reason to triumph over nature.

And yet the Greeks were surrounded by pagan cultures and the thousand religious cults of Mediterranean civilization. These cults made use of music, wild festivals and (possibly) psychotropic drugs. The abandonment that resulted was part of their religious and social experience, just as the sculpted columns and fine murals of Greek temples were a part of theirs.

Nietzsche describes Greek tragedy, particularly the plays of Aeschylus and Sophocles, as the synthesis of Apollonian and Dionysian aesthetics. A hero tries to make sense of the world, but is ultimately overcome by fate. Oedipus investigates the murder of the last king of Thebes, only to find that he himself is the murderer and that he’s been sleeping with his mother. Agamemnon tries to avoid angering the gods as he returns from Troy, only to be punished for sacrificing his daughter Iphigenia ten years earlier. The protagonist tries to make sense of the world and fails; the chorus, in turn, makes sense of the protagonist’s failure. The Apollonian and the Dionysian weave together in a constant cycle.

The metaphysical consolation, which as I have already indicated, true tragedy leaves us, that at the bottom of everything, in spite of all the transformations in phenomena, life is indestructibly power and delightful, this consolation appears in lively clarity as the chorus of satyrs, the chorus of natural beings, who live, as it were, behind civilization, who cannot disappear, and who, in spite of all the changes in generations and a people’s history, always remain the same. With this chorus, the profound Greek, capable of the most delicate and the most severe suffering, consoled himself, the man who looked around with a daring gaze in the middle of the terrifying destructive instincts of so-called world history and equally into the cruelty of nature […]. Art saves him, and through art life saves him.

– Friedrich Nietzsche, The Birth of Tragedy from the Spirit of Music

The Weight of Experience

One last point to recall about Greek tragedy: the periods depicted in Oedipus Rex and the Oresteia were just as ancient and fantastic to the Greeks as the periods depicted in Rome, The Tudors and Game of Thrones are to us. We may lump them all together as being part of the “toga era,” but the myths of the Trojan War were distant legends to Aeschylus and his audience. 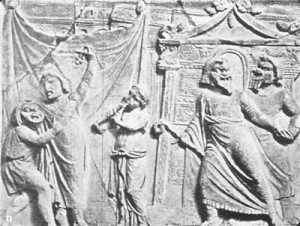 Man, who cares about this Agamemnon jerkoff anyway?

Why did Aeschylus set his best and most beloved plays in an era that was ancient even to the ancient Greeks? Because (as mentioned above) the weight of history lends credibility to a story. It means that the moral of the story is not just a casual observation, but a lesson that thunders down the centuries. His contemporary plays, like The Persians, were meant to cheer on the Greek state. His tragedies were meant for something else.

And what do Greek tragedies tell us? They blend together the interplay of Apollonian and Dionysian aesthetics. A figure of legend – Oedipus, King of Thebes; Agamemnon, patriarch of the house of Atreus – attempts to put off the fate that the universe has in store for him. He creates Apollonian forms: proper obedience to protocol, the weight of ritual. But Dionysian sensation catches up to him. He surrenders to or is overcome by impulse: gouging his eyes out in horror, or falling victim to his wife’s rage. The survivors comment on his downfall, thereby lending form once more to a formless chaos. And so the cycle continues.

There Are No Men Like Me. There’s Only Me

The genre of Blood, Tits and Scowling blends the Apollonian and the Dionysian just as well as, if not better than, Greek tragedy. It depicts selfish men of power, scheming to build empires. Then it shows the impulses of sex and violence that lead their best-laid plans awry. Neither Nucky Thompson, Al Swearengen or Robert Baratheon can build a world that blood and tits can’t overturn. But neither can blood and tits survive for long in Bacchanalian innocence without someone scowling in the background.

The most famous examples of this genre all take place in historical epochs: Renaissance England, the decline of the Roman Republic, the Wild West, the Roaring Twenties or fantastic empires such as Camelot or Westeros. There are a few contemporary examples, such as True Blood or The Sopranos. But the former takes place in a world of dark urban fantasy that we can’t identify with. And the latter takes place in a world which America has so mythologized – the world of organized crime – that it might as well be set in Kings Landing, NJ.

(That’d be a show, eh? Robert Baratheon as an aging capo, Ned Stark as his reluctant lieutenant, Varys and Littlefinger as his scheming enforcers. The rival families drawing in at the scent of blood) 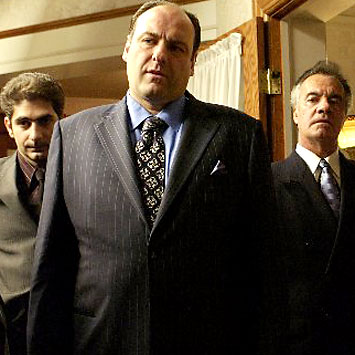 I charge you to bring justice to the false knight, Big Pussy, and all those who shared in his crimes. I denounce him and attaint him. I strip him of all ranks and titles, of all lands and holdings, and sentence him to death.

Why are there so few Blood, Tits and Scowling shows about contemporary men of power? Why isn’t the upcoming Kennedys mini-series (starring Greg Kinnear, Katie Holmes, Barry Pepper and Tom Wilkinson) about Jack Kennedy the philanderer and Lyndon Johnson the bloodthirsty warmonger? Why are there miniseries depicting John Adams as a crotchety patriot, but none depicting Ben Franklin as a schemer and sex fiend? Because these figures of legend are too recent and too prominent for Americans to revisit. The current American “story,” if you will, is too tied up in the classroom notions of these men.

But Henry VIII? That’s like, what, five centuries ago? Who cares what we say about him?

If you want to say that a historical figure was a skirt-chaser, a murderer or a conspirator, you either need substantial proof or you need to wait until even his descendants’ scholars are dead. Better yet, pick someone obscure. Boardwalk Empire depicts the corruption and degeneracy of Nucky Thompson, treasurer for Atlantic City in the 1920s. It doesn’t depict the corruption, xenophobia and callousness of Woodrow Wilson, President only a few years earlier. Deadwood takes on Wild West figures no one has heard of, like Al Swearengen. And Game of Thrones is about a continent full of people who never existed!

Picking targets that no one will complain about gives you license to revel in the Blood, Tits and Scowling that the genre demands. You can portray your heroes as anti-heroes: cunning masters of their circumstances, manipulating their peers into position. You can also play up the baser instincts that led to their downfall: the violence, the sex and the commingling of the two. Say that Ronald Reagan was a cunning manipulator and you’ll get legions of conservative protesters falling on your head. Say the same thing of the young Octavian, though, and who will care?

So the Blood, Tits and Scowling genre requires an era that’s either historically distant (Rome, Deadwood, The Tudors, Boardwalk Empire) or so fantastic that it might as well be another world (Game of Thrones, Camelot, Spartacus). It cannot be grappled with in the present era, just as the Greeks of antiquity couldn’t depict tragedies with contemporary figures.

But there’s one question left unanswered: why now? Why has this genre emerged – or re-emerged – on premium cable in the 21st century? Why not ten years from now, or ten years earlier? Why do producers find a need to tell us tales of historical figures behaving badly? And why do audiences keep eating it up?

I leave this question as an exercise for the comments thread, partly because I don’t have an answer myself. Greek tragedies emerged from a period when Greece was emerging from the rule of a tyrant and under threat from the Persian armies. It’s possible that this blend of domestic unrest and foreign paranoia left many Greeks wondering if their Apollonian forms could sustain the buffets of Dionysian fate.

But I’m just guessing. What do you think? Why has the Blood, Tits and Scowling genre emerged in this century? And what does it portend for the future? 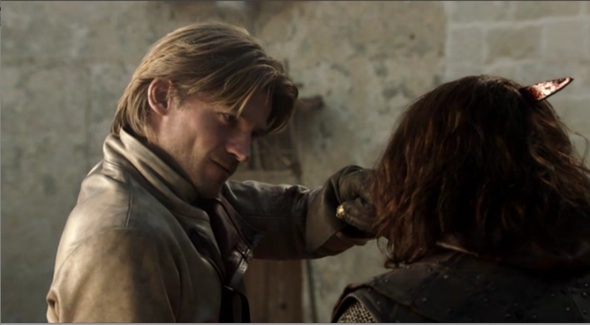 24 Comments on “Blood, Tits and Scowling”