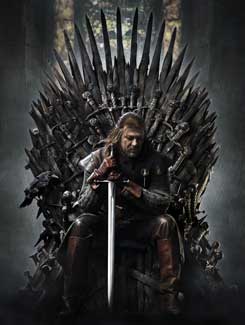 They even make it LOOK noir in that poster. Imagine Bogie sitting on that thing.

Spoilers for the HBO adaptation of Game of Thrones.

Two hit TV series debuted this spring: The Killing and Game of Thrones. Interestingly, they were both murder mysteries.

You may not think of HBO’s fantasy epic as a gritty noir. The highlights for most people are the dynastic maneuvering, the rich mythology, the lush production values, and the steamy sex, not necessarily in that order. There’s a ton of plotlines, but Ned is the main character of Season 1. And Ned spends the season in full-out private detective mode. He doesn’t have the trenchcoat, but he does have the stubble.

The events of Game of Thrones are kicked off by the suspicious death of Jon Arryn, the Hand of the King. King Robert wants his old friend Ned to take on the job. At first he’s reluctant. Then, his wife’s sister reveals that she thinks Jon Arryn was murdered. Ned agrees to become the new Hand, largely because he wants to find out the truth and protect his friend. In other words, he puts on the deerstalker and takes the case.

But the show isn’t merely a detective story. It’s a noir detective story, meaning that it takes place in a world of duplicity and corruption. Probably the all-time master of noir is Raymond Chandler, whose protagonist Philip Marlowe worked the streets of Golden Age Los Angeles. In December 1944, Chandler wrote an essay for The Atlantic called “The Simple Art of Murder,” which sketches out his personal formula for detective novels. It’s striking how much Chandler’s world has in common with George R. R. Martin’s.

The realist in murder writes of a world in which gangsters can rule nations and almost rule cities, in which hotels and apartment houses and celebrated restaurants are owned by men who made their money out of brothels, in which a screen star can be the fingerman for a mob, and the nice man down the hall is a boss of the numbers racket; a world where a judge with a cellar full of bootleg liquor can send a man to jail for having a pint in his pocket, where the mayor of your town may have condoned murder as an instrument of moneymaking, where no man can walk down a dark street in safety because law and order are things we talk about but refrain from practising; a world where you may witness a hold-up in broad daylight and see who did it, but you will fade quickly back into the crowd rather than tell anyone, because the hold-up men may have friends with long guns, or the police may not like your testimony, and in any case the shyster for the defense will be allowed to abuse and vilify you in open court, before a jury of selected morons, without any but the most perfunctory interference from a political judge. 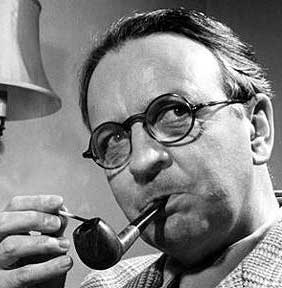 Chandler generally wrote about Los Angeles, a place that was all wealth, glamor, and respectability on the surface: millionaires, movies stars, fancy nightclubs, etc. But under the surface, everything is corrupt. That’s King’s Landing. The place is supposedly the heart of The Realm, the crown jewel of civilization. But the King’s closest adviser runs a brothel. His wife is sleeping with her brother. The top knight is a sociopath who beheads horses in public. The whole government is secretly up to its eyeballs in debt. And the King himself is kind of a dick. Everybody has secrets, everybody’s plotting, everybody’s spying. King’s Landing may be a medieval fantasy realm, but it might as well be some starkly lit black and white maze of menacing alleyways.

Game of Thrones shares another similarity to Chandler’s work. Chandler always made his protagonist the one decent human being in a wicked and fallen world. He called Marlowe his “white knight in a trench coat.” (This isn’t a universal noir trope, by the way — Dashiell Hammett’s Sam Spade is having an affair with his own partner’s wife.) Here’s more from “The Simple Art of Murder”:

But down these mean streets a man must go who is not himself mean, who is neither tarnished nor afraid. The detective in this kind of story must be such a man. He is the hero, he is everything. He must be a complete man and a common man and yet an unusual man. He must be, to use a rather weathered phrase, a man of honor, by instinct, by inevitability, without thought of it, and certainly without saying it. He must be the best man in his world and a good enough man for any world.

I think we can agree that if Ned Stark is one thing, he’s a man of honor, and the best man in King’s Landing. “Best” in the sense that Chandler meant, at least.

But of course, Game of Thrones isn’t exactly like a Raymond Chandler book. For starters, none of the Philip Marlowe novels end with the detective’s head being mounted on a pike. I think the difference is that in Raymond Chandler’s world, the truth still matters. Law and order may be a little wobbly, but at the end of the day, the police are going to prosecute murder. Everything Marlowe does is predicated on the assumption that when he discovers the truth, someone is going to give a damn. 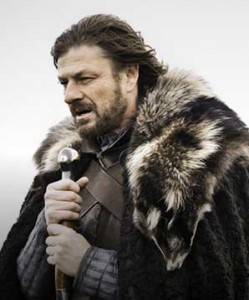 To paraphrase one of my favorite noirs: "Forget it Ned, it's King's Landing."

That’s the illusion Ned Stark is laboring under as well. To me, the pivotal moment of the first season is when he’s transcribing King Robert’s will, and instead of writing that Joffrey should inherit the throne, he writes “my rightful heir.” Since Ned has learned that Joffrey isn’t his rightful heir, he thinks this is going to foil the Lannisters’ whole scheme. Ned presents the will in the throne room, in front of dozens of people. Cersei responds by tearing it up. Ned tries to have her arrested, and the Lannisters unleash a full-scale slaughter of everyone remotely associated with the Starks, including Sansa’s nurse.

As it turns out, it doesn’t matter who killed Jon Arryn, or whether Joffrey is the rightful heir. All that matters is who’s sitting on the throne. As Littlefinger tells Ned, the guards will obey whoever pays them. This is a Machiavellian world, in which power means never having to say you’re sorry.  Tyrrion Lannister is accused of something he (probably) didn’t do, and his trial consists of a couple designated champions fighting to the death. That’s a perfect metaphor for the whole Realm: muscle takes the place of justice. Lady Stark doesn’t learn the truth about what happened to her son until she hits Jaime in the side of the head with a rock.

A private detective would be very useful in this world—there’s certainly a lot of secrets to uncover. But a White Knight doesn’t stand a chance.

SPOILER POLICY: Because it’s Game of Thrones Week on Overthinking It, we are posting a specific spoiler policy on each article. This article deals with the events of Season 1 of the HBO series — please limit any spoilers in the comments to that.

4 Comments on “Game of Thrones and Raymond Chandler”