If you’ve seen the trailer and publicity for the upcoming Tom Hanks/Julia Roberts movie Larry Crowne, then surely you’ve noticed its usage of that over-used movie trope, “once ridiculed mode of transportation becomes celebrated by characters.” 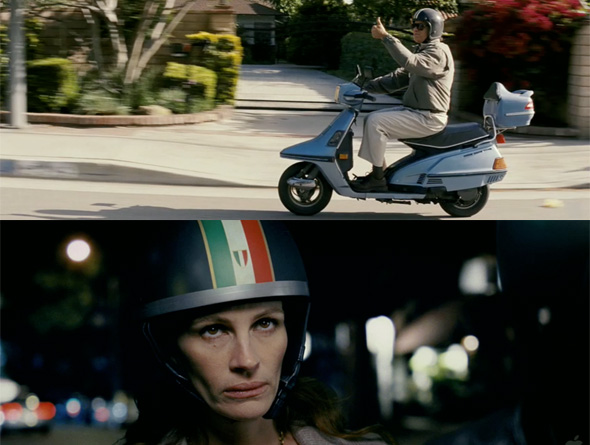 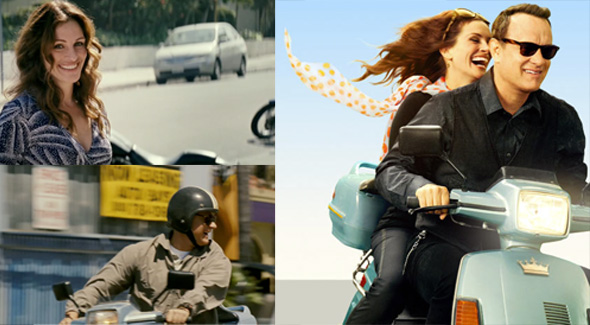 ...and turn it upside down.

But maybe something else is going on here. Maybe the disparity is indicative of this particular moment in American transportation policy.

Let’s start our journey by examining the more straightforward of our two transportation tropes: characters upgrading their mode of transportation.

There are countless examples of this, so I’ll stick to pointing out two highly illustrative instances. In the Karate Kid, Daniel starts the movie as an impotent, humiliated teenager. Not only do the Cobra Kai bullies kick the crap out of him, they also zoom around on their intimidating motorcycles while Daniel putters around on his bicycle. 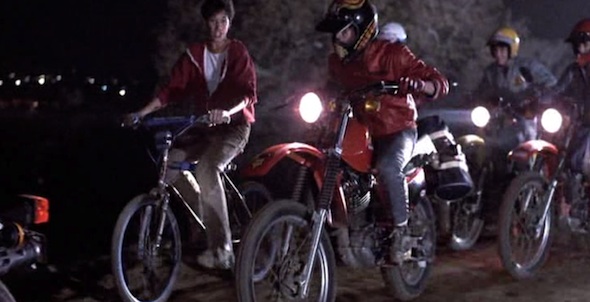 Mr. Miyagi remedies both of these problems by teaching Daniel karate and hooking him up with a sleek convertible. 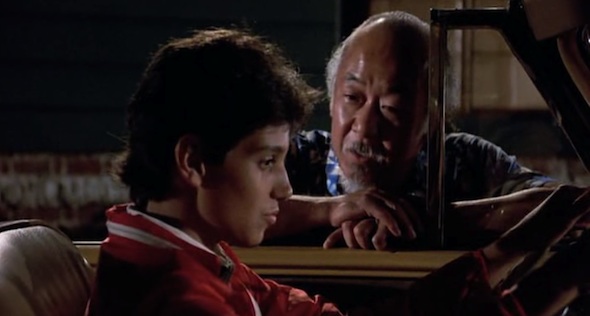 Daniel-san presumably gets to second base in this car with Elisabeth Shue.

In Avatar, the paralyzed Jake Sully trades his wheelchair for a Pandoran Direhorse while in Na’vi form, and as both his skills in his new body and his affinity for the Na’vi increase, he acquires a flying Mountain Banshee on his way to taming the mighty Toruk. 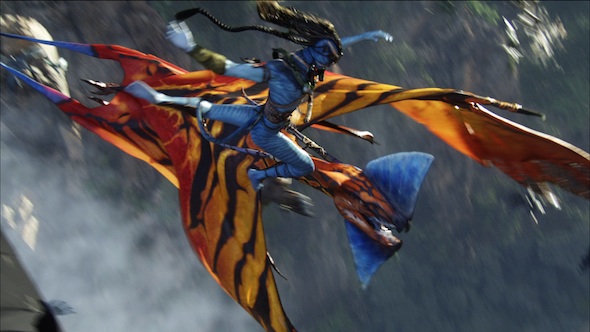 I SEE YOU. Remember back in early 2010, when that reference was hi-larious?

In both of these instances, the filmmakers chose to give their characters’ progress a concrete, visual representation rather than just let it be stated in the dialog or inferred from actions. Some might call it lazy or leaning on a crutch, but it undeniably works. Often, these new vehicles are required by the plot; the hero needs the car/Toruk in order to get the girl/defeat the Sky People.

But more importantly, this technique is rooted firmly in one of the most important rites of passage in American culture: learning how to drive and getting a driver’s license. The feeling of progress that a teenager gets when s/he achieves this sort of independence of movement is huge, and that’s clearly what filmmakers are taping into when giving characters new wheels or wings.

I could go on with more examples–the aforementioned Star Wars (Luke trades his speeder for the Millenium Falcon and eventually an X-Wing fighter), X-Men: First Class (mutants putter around in cars until they catch a ride in Beast’s SR-71)–but you get the idea. As characters progress, so too should their method of transportation.

But what happens when characters are presented with an undesirable mode of transportation and, instead of upgrading to a new mode, simply change their attitudes towards it? The same thing as in the above trope: the character’s attitude has changed because, well the character has changed. Only in this instance, the character’s growth is shown not by acquiring a powerful new vehicle, but by learning to accept a modest method of getting around.

In The 40 Year Old Virgin, Steve Carrell’s character is ridiculed for riding a bike, and it’s often portrayed as one of the many things keeping him from getting laid. But by the end, he doesn’t get the girl with a hulking sports car; instead, the Catherine Keener character joins him for bike rides, goofy helmet and all.

And from what I can tell of the Larry Crowne trailer and marketing materials, the Julia Roberts character goes from regarding Tom Hanks’s scooter with disdain to riding along with joy.

These are the only two examples of this trope that I could come up with, but even if there are others out there, I’m pretty sure that they would also be romantic comedies. These movies, unlike their action counterparts, are mostly about people changing and growing together, not about one hero achieving self-actualization. The former lends itself to characters adapting to someone’s quirky mode of transportation; the latter lends itself to characters achieving Ultimate Power with the help of Fast Cars and Planes That Blow Things Up.

But why is it that, even in the genre that best lends itself to this plot device, is it used so infrequently?

Because Americans have a difficult time dealing with complicated and changing transportation policy issues.

The 40 Year Old Virgin and Larry Crowne present non-car personal transportation modes as positive choices in contrast to the dominant cultural attitude that these things are second-rate compared to cars. Outside of movies, challenging that notion is a relatively new phenomenon. The “livable streets movement” that criticizes auto-centric transportation policies is a fairly recent phenomenon in America. In 2006, one year after the release of The 40 Year Old Virgin, the website Streetsblog.org writes:

When we started, the mayor [of New York City] could still be heard in public saying that more traffic was good for the city. Improving streets for people who walk, bike, and ride the bus was not a top priority.

Our coverage amplified the message of transportation advocacy organizations and provided a unique counterweight to media coverage biased in favor of the car-centric status quo. 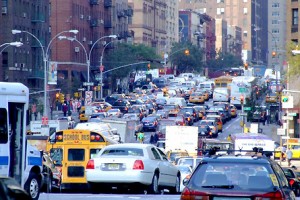 Ah, the freedom of movement afforded by the automobile.

Urban planners and advocates were finally getting wise to the fact that suburban sprawl and traffic-choked roads were unfortunate by-products of our automobile dependent culture and infrastructure. But as the movement gathered steam in the last half of the decade, so too did controversy over transportation policies that didn’t prioritize cars first.

In 2008, a proposal to levy a toll on cars entering Manhattan during peak hours (congestion pricing) set of furious debate in New York City and ultimately failed to gain passage in the New York State Assembly. In the first years of the Obama administration, a proposed national high speed rail network was criticized as “socialist” by the same politicians who preferred to funnel billions of dollars into highway and road projects. And in the last years of Michael Bloomberg’s mayorship of New York, his transportation secretary’s ambitious projects to slow down traffic and build bike lanes in New York have been met with protests and lawsuits.

In other words, Americans are slow to accept the counter-intuitive truth that they are trapped by their automobiles, the vaunted symbol of American independence and freedom of movement. Rising gas prices have chipped away at this reluctance, but not to the point where adults are commonly presented as choosing bikes, scooters, or public transportation instead of cars in movies and TV.

Not yet, that is. Maybe Larry Crowne is at a tipping point in our national discourse on cars; it could be both a reflection of our past attitudes towards non-car transportation options (lame, sucks compared to cars) as well as a preview of our future attitudes on such options (OK, a viable option compared to cars).

Take a look at this publicity art from the Larry Crowne website: 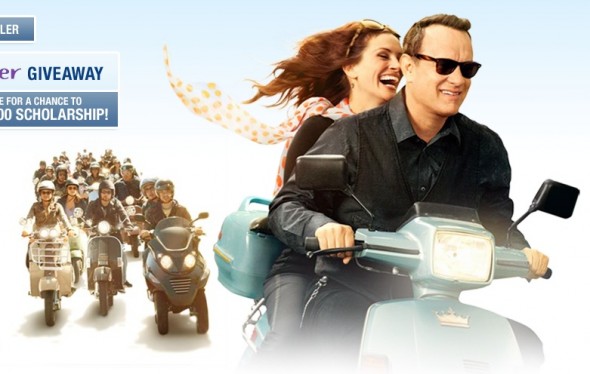 Get on your bikes and ride!

Notice that it’s not just Tom and Julia on the scooter; they’re trailed by a whole gang of scooter-riders. As if they’re blazing a trail towards America’s transportation future.

Before I close, I should acknowledge a couple counterarguments to what I’ve presented above: 1) scooters are not the same thing as bicycles and 2) motorcycles, close cousins to scooters, have long been presented as non-shameful alternatives to cars in movies. To counter that, though, I would say that 1) scooters don’t offer nearly as much potential mobility as cars in that scooters don’t have the range or the speed of a car and 2) motorcycles are more comparable to cars in that regard. More importantly, scooters, like bikes, are enduring symbols of urban, car-less commuting.

I should also acknowledge that I’m not necessarily criticizing movies that show a hero obtaining a powerful vehicle as a visual depiction of his/her self-actualization. But if that vehicle has poor gas mileage, and if the roads are clogged with traffic, then our hero might be better off on a hipster fixie bike or a Eurotrash Vespa instead of a car. 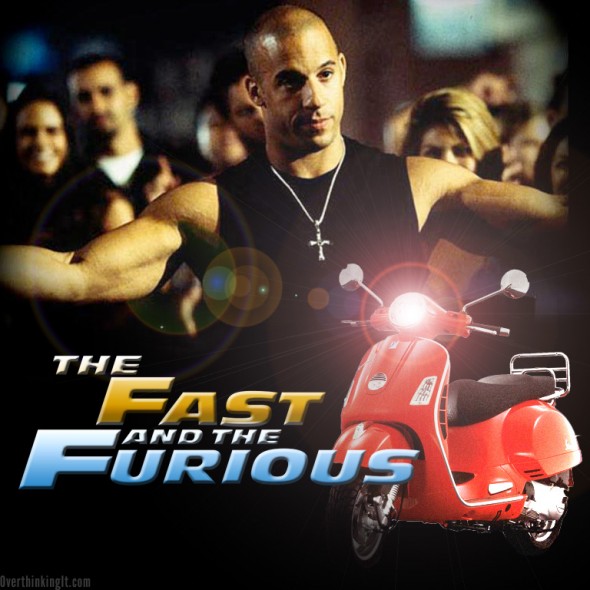