Unlikely as it seems for an animated film about a Hawaiian-shirt wearing chameleon, Rango is a brazenly political movie, decrying political corruption while advocating for equitable distribution of resources. To do so, it borrows the template of A Christmas Carol to show the past, present, and future dangers of resource inequality caused by a free market economy.

The film’s main character Rango is forced to see this progression through time so that he might turn away from selfish capitalism, in a story that parallels Scrooge’s famous journey of self-discovery. For just as Scrooge is only concerned with his own bottom line, Rango is initially concerned with his own quest for water in the middle of the barren desert. Water is the most prized possession, and it will symbolize several scarce resources over the course of the film.

Rango, like Scrooge, begins in a sheltered life, deluding himself into believing that he is content. Both are then thrown into another world, literally in Rango’s case. He is tossed out of his comfortable terrarium onto a busy Nevada highway. There, he meets his own version of Marley, in the form of a wise old armadillo known as Roadkill. 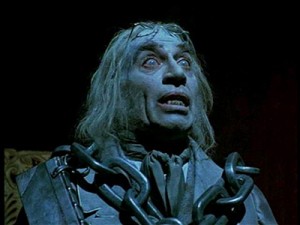 Marley tells Scrooge, “It is required of every man that the spirit within him should walk abroad among his fellowmen, and travel far and wide.” Similarly, Roadkill encourages Rango to trek out into the desert. “We all have our journeys to make,” Roadkill tells him, as Rango sets off in search of water. Marley at least gives Scrooge a heads up about what he’s about to encounter in the spirits, while Roadkill only alludes to finding dirt before finding water.

After a disorienting, dehydrated trek through the desert that mirrors Scrooge’s sleepless night, Rango arrives in the town of Dirt, which is filled with Great Depression-era imagery. As Rango arrives, a man packs his family into a carriage and rides off into the sunset. The town’s bank, which stores Dirt’s precious water supply, is cutting off credit to those who need water for their farms. “Times being so hard, we just can’t give no more credit,” the bank manager says. “Folks ain’t making deposits no more.”

Rango then visits the town mayor, an elderly wheel-chair bound turtle, who sips water from his own private stock. What initially seems to be unlucky weather is soon revealed as a far more nefarious scheme. “Control the water and you control everything,” he ominously tells Rango. He oversees an elaborate water-distributing ritual in the town that evokes 1930s breadlines, while making infeasible promises to the townfolk.

His lackeys, who act as the town’s loan sharks, bully poor farmers who can’t pay their mortgage, forcing them to sell their land for nothing. The mayor, we quickly learn, is buying up these properties around Dirt, useless though they are in the drought. When Rango questions the Mayor on these purchases, he shows Rango a modern town that is being built in the desert outside of Dirt.

“What are you building out here?” Rango asks.

“The future, Mr. Rango. The future. One day soon, all this is going to fade into myth. The frontier town, the lawmen, the gunslinger. There’s just no place for them anymore. We’re civilized now.”

On first glimpse, this imagery may seem a little disorienting. The wheelchair-bound mayor is a clear allusion to President Roosevelt. Is the movie implying that FDR was purposefully prolonging the Great Depression in order to further development? It’s true that a significant portion of the US’s current infrastructure is a result of New Deal-era construction. But it seems immensely cynical, even for the federal government, to assume that the president would favor a decade of staggering national poverty in order to build highways and dams.

What the movie is really arguing against is the role of the wealthy businessman, who can abuse resources for his own benefit while harming the working classes. By making the wealthy land owner also the mayor of Dirt, the movie is emphasizing the corrupt role of corporations in America’s political system. The mayor represents the unholy marriage of laissez-faire economics with political lobbying, where the government will never interfere with a company’s right to make money.

Rango even benefits from this cronyism when he is unilaterally made sherriff. Why is there no other authority in Dirt to oversee the sale of property? Instead of portraying the community bank manager as a bad guy – a tempting prospect in these days of anti-banking righteousness – the bank manager is sympathetic, and ultimately disposed of by the mayor’s lackeys. He too is part of the people and his genuine efforts to help the people of Dirt make him a nuisance to the higher-ups.

While those ideas are settling, the movie subtly shifts its aim and the conflict moves into the present day. Instead of representing capital in the 1930s, Dirt’s elusive water supply begins to symbolize the modern day struggles for oil that have defined much of global politics in the past few decades. The movie leans heavily on allusions to the Iraq War, taking a liberal view that presume oil was the cause for the war. Rango and his well-armed crew from Dirt go to fight in a foreign land for their precious resource.

“Don’t y’all worry about a thing,” Rango says to his troops at the beginning. “Come tomorrow we’ll locate that water and return to a hero’s welcome.” The team is tracking three gopher types, who they believe have stolen their water. But when they arrive to surround the thieves, an army of related rodents literally emerge from the sand to defend their side. The ensuing fight is long and complex. Because the movie intermingles species so much, it’s sometimes hard to tell friend from foe. Even the characters in the film can’t quite keep track. 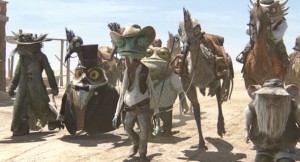 But in the end, the rodents haven’t stolen the water. “No water? Then what the hell we been fighting for?” says one of the baddies, a moment that marks reflection for both sides of the fight.

The water has literally disappeared, having been dumped into the desert by the mayor. When we next see him, he is playing golf with his lackeys, and his references to controlling the water place him in the role of an OPEC-like cartel, determining how much water should be distributed and in what situations. He keeps enough water for himself and his buddies, even holding onto enough to be able to drown an enemy in the middle of the desert. By keeping the townspeople and the rodents fighting over what they believe will be their own enrichment, he is able to distract the people from his own wealth and corruption. He even manages to convince the town people to hang two of the rodents, despite their obvious innocence.

Right about now, things are seeming pretty hopeless. The town is desperate for a rare resource, and has begun an extended, unwinnable war with another tribe. At this point, Rango gets his own otherworldy visit from the Spirit of the West, an archetypal cowboy who tells Rango, “You came a long way to find something that isn’t out here.” Rango is humbled, as Scrooge is at this point, as the Ghost of Christmas Future shows him the terrible days to come. “‘Spirit,’ he cried, tight clutching at his robe, ‘hear me! I am not the man I was. I will not be the man I must have been but for this intercourse.'” Rango, having similarly absorbed the lessons of unregulated capitalism, is allowed a brief glimpse into that future.

Walking back into the desert, Rango stumbles along a Las Vegas golf course, watering it’s greens with perfectly clean water. Water, in this stage, represents actual water. Many economists believe that water wars will break out in the future, as access to clean water becomes a serious problem amidst the growing populations in Asia and Africa. And yet the West continues to be extravagant with this resource. This highlights the disparity of available resources as a result of the past century of corporate capitalism. When this source of water is revealed back in the town of Dirt, the movie’s two villains, the mayor and his henchman rattlesnake, almost immediately turn on each other, a possible allusion to conflicts that might arise between current allies as water becomes more and more valuable in the future.

Luckily, this is the future bit of the story – the part that can still be changed. After discovering this new source of water, the now educated Rango declines to hoard it. Instead, he literally floods the town with it, sharing this precious resource with everyone, including the formerly enemy rodent army. The old guard of capitalist greed and bullying is displaced with a new, socialist attitude of equitable distribution.

Like all good Hollywood movies or radical revolutions, the practicality of this decision isn’t explored. Flooding a town with dirt streets is likely to leave a very muddy avenue and still no clean water, while there is only one farm in Dirt still producing crops. There is no government in place, and like all resources, the water will run out eventually. Unlike Scrooge, who has the power to change his own life for the better forever, Rango is simply one little lizard, trying to take on the world. Unfortunately, history, economics, politics, and logic say he is bound to fail.

Elise Czajkowski is attempting to make it as a freelance writer and general media type person. She would very much like you to read some of her other words at ponderances.tumblr.com. 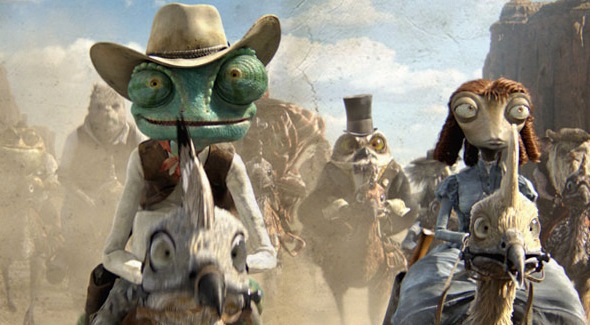 [Have your own theories on desert politics and lizard economics? Sound off in the comments! – Ed.]

11 Comments on “Rango: A Capitalist Carol”