If you’ve watched enough episodes of Law & Order, you know how to react when you find a body.

You’re just a regular guy, going about your day in the heart of Manhattan. Maybe you’ve got a friend or coworker with you, chatting about some B.S. you’ve gotta deal with at work, you know? All of a sudden, there’s a glimpse. A foot poking out from underneath some trash bags. The corner of a torn sleeve on the other side of a bush. Or even the sick white of mortifying flesh. You hesitate, then approach …

And then we cut to our series regulars.

While Law & Order had its formula, it’s unfair to pin the entire police procedural genre on its dark blue uniform. NYPD Blue, NCIS, JAG, CSI, Homicide: Life on the Street and other American shows all have their recipes for disaster. The Brits have The Bill and Prime Suspect. The format works like a sonnet: all the imagery you like, and on any theme, provided it runs for fourteen lines, each of a certain meter, and ends with an envoi.

So what can AMC’s new series The Killing bring to the table? 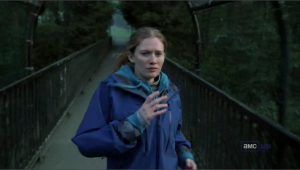 It’s a tranquil scene. Sure, the POV moves along at a sprinting clip – pity the Steadicam operator who had to keep up with her – but the background is lush greens and blues. Besides, Linden’s face is center frame throughout. She’s a steady, calming presence. 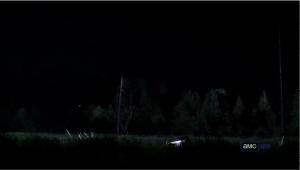 … this screaming teenage girl, sprinting through an overgrown field at night! The only light is a bobbing flashlight fifty yards behind her.

Not exactly peaceful, but not unsettling given the show we’re watching. It’s a police procedural. It’s a murder mystery. Hence, we need a murder. And what better way to humanize the victim – thus making the killer all the more monstrous – than by showing her final hours? 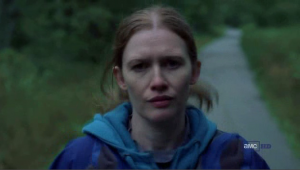 Back to Linden on her jog. Our perspective on Linden is straight ahead. She is coming right at us; in fact, her gaze meets the audience as the camera crosses frame. The road turns into a vanishing point behind her. 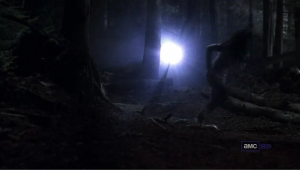 Contrast this with our victim, who crosses left to right both times. Linden’s face is clear and identifiable; the victim’s face is shadowed and indistinct. 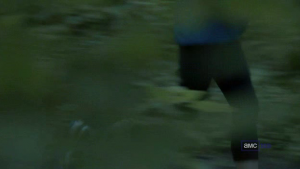 But now Linden’s running left to right, too. And in the next shot, our victim’s face is clear, while Linden’s obscured from the hips up.

These match cuts have gone on long enough for us to start wondering about the relation between these two. Is Linden flashing back to the night before? Is she reconstructing a chase scene in her head? Perhaps the young girl and Linden are the same and this is a nightmare from her past (a la Agent Clarice Starling in Silence of the Lambs). Whatever the case, we know there’s a connection.

Our victim gets a moment to rest: catching her breath behind a tree, biting at her fingers in terror, until the bobbing flashlight tells her that her pursuer is nearby. Linden keeps running throughout. 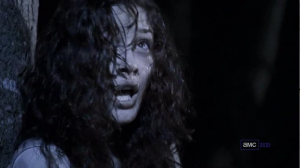 Back and forth, on and on, the music building and pounding throughout, until both Linden and the victim come to the bottom of the hill. We lose the victim at this point – literally – but stay on Larsen. In the distance, on the shore, she sees something. 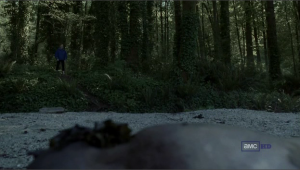 The moment we've been waiting for!

It’s so close in frame that we can’t focus on it. But it’s gray, bloated and irregular. It doesn’t look pleasant. And the full stop that Linden gives it, plus the hesitant approach, tells us it has to be a dead body. 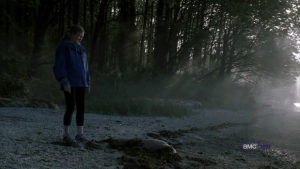 Do we get hand over mouth? Disgusted wince? Veteran cop steely gaze? What's it gonna be?

Because we all know what it is. The language of film has been telling us what it is for the last minute and a half. We’ve followed the victim through the fields, into the woods and down the hill to the shore. And we’ve followed Linden all that way as well. Now the victim’s path crosses with our hero’s. And so begins a twisted tale of murder and betrayal that will lead Sarah Linden to … 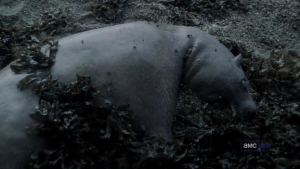 10 Comments on “The Killing: Death as Surprise, Death as Interruption”