It could be argued that 2010 was the first year in which family-oriented CG animation surpassed real-life movies. Keeping in mind the technical and stylistic development of animated features in the last few decades, the level of sophistication presented in the last year is incredible. There’s a very high level of graphic realism: although the characters usually still look and behave somewhat cartoonish, their clothes, their hair, the objects they handle and their surroundings are often indistinguishable from the real thing. The creation of those worlds requires a whole lot of scientific knowledge: how light is changed when traveling through stained glass, how certain fabrics react to a tight grip, how a cloud of dust particles or a column of fire behaves on a sunny day or in a rainstorm, the trajectory of an arrow that is shot from a bow and the way it splinters when it hits a rock. It seems fitting that some of the recent films pay homage to the science that has created them.

But instead of just paying lip service to this most unique feature of humankind, two of the most prominent animated films of 2010, How To Train Your Dragon (HTTYD, Dreamworks) and Tangled (Disney), have their main characters discovering the most basic principles of the scientific method and using them to break out of their primitive surroundings and transforming the society they live in, just like the great philosophers of ancient Greece have done before them.

The term “science” usually refers to a specific set of methods that allows us to investigate and understand the natural world around us. You can argue about the specific origins of the scientific method as we know it today, but it is very plausible that everything started with someone looking up into the night sky, wondering about its recurring patterns and what they might tell them. The ancient Greeks noticed that all the stars moved in the same direction relative to each other, whereas certain objects seemed to go all over the place. They called them planets (from the Greek word for wanderer) and studied their movements using the technology present at the time.

Later, the invention of the telescope allowed their further investigation and ushered in a new era for humanity. Isaac Newton realized that the movements of the planets follow the same set of rules as an object thrown on Earth – thus establishing the law of universal gravitation. This combination of observing natural patterns, describing them as models and deriving new hypotheses from them (aka the scientific method) was so powerful that Newton was later accused of destroying the beauty of the rainbow by explaining, and thereby de-mystifying, it. Humankind was now inspired to challenge nature’s mysteries head-on instead of passively accepting its fate.

Before science, people were trying in vain to make sense of all the good and bad things nature bombarded them with, be it seasonal changes, earthquakes, music or love. In their desperation, they attributed many events to demons, ghosts or fairies. Unexplored regions were inherently frightening and dangerous and the phrase “Here be dragons” was used to mark the unknown and mysterious. Because, for all they knew, right after the next hill there might be a place where people suffer random attacks by flying, fire-breathing reptiles. 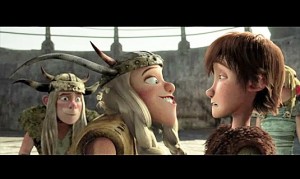 One of these people will go on to a career in science. Guess which one.

Hiccup, the protagonist of HTTYD, lives in the small town of Berk, which actually is suffering random attacks by flying, fire-breathing reptiles. The Viking tribe that lives there is constantly fighting back, with all male inhabitants (as well as love interest Astrid) learning how to attack and defeat the creatures. Hiccup is the socially awkward wannabe Viking who has to rely on his wits to assist his peers in a rough dragon fight. The end of the first act is marked by a pivotal moment in which Hiccup closely encounters a species of dragon that nobody before him has ever seen in broad daylight. He uses this opportunity to draw a picture of the creature. When he draws the symmetrical outline, he realizes that he has made a mistake: The dragon is missing a part of his tail wing, and Hiccup has to erase that part of his drawing, concluding that the creature is wounded.

This scene does not show an artist at work, who would have used his keen eye to draw an accurate picture right from the start. Instead, it shows the actions of a scientist. Although Hiccup had no prior knowledge of this particular type of dragon, he assumed it to have a symmetrical outline based on a priori assumptions about nature. Either he knew enough physics to deduce what an aerodynamic shape should look like or he noticed the symmetrical tendencies of biological entities such as animals and leaves.

In any case, this display of scientific reasoning drives the rest of Hiccup’s actions in the movie. He studies the dragon and its peers meticulously and is shocked when he finds that the Vikings’ encyclopedia about dragons is only filled with ways of defeating them – which means that his society does not define them as biological beings which can be understood or even domesticated and has basically given up any effort to investigate them further. It is Hiccup’s insight into their physical and behavioral patterns that leads his people out of the darkness of ignorance using science, as Carl Sagan put it in The Demon-Haunted World, as a candle in the dark.

Rapunzel, the protagonist of Tangled, has an easier life than Hiccup. She spends her days in absolute safety, in a tower standing in a secluded valley. Without the need or the technology to investigate the lush nature around here, we would not expect her to achieve scientific literacy all by herself, would we? 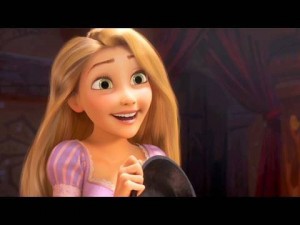 Actually, there is one thing bugging her. In the lonely hours spent in her tower looking up into the night, she realizes the regular course of the stars, even charting it on the wall of her room. However, once a year on her birthday, a strange array of stars crosses the sky without explanation. Over the years, she realizes that this occurrence does not make any sense based on her knowledge about the world. Driven by her personal curiosity, she makes it her goal to find out about this phenomenon. Like Hiccup, she knows that there are patterns in nature and just like him she gets suspicious when she encounters irregularities to these patterns. Her dedication to the principles of science, more than a chance encounter with a potential love interest, is what drives the plot of the movie.

It is interesting to note that the two characters seem to be designed with two quite different popular perceptions of scientists in mind. From hairstyle to social behavior, everything about Hiccup appears über-nerdy. He seems to be more closely related to The Simpsons’ Professor Frink than to his Viking friends. Rapunzel, on the other hand, is a young and energetic spirit. She represents the strong and independent explorers of scientific history, following her research ideas out of sheer curiosity.

Also, as is often the case, their careers in science are only short term. Rapunzel, having achieved her personal research goal, leaves the field and gets married. Hiccup pursues his interests in applied engineering. However, in HTTYD, the audience gets a glimpse of what might be the next big discovery for Berk’s young scientific community. When observing the newly domesticated dragons side by side with their human owners, we realize a striking resemblance in their physical features, suggesting a physical relatedness between the former foes.

When Charles Darwin reported this observation, it was another turning point in the history of science. The theory of evolution, much like the theory of gravitation, has served as the foundation for countless developments and inventions that have shaped our modern civilization. Darwin’s thought process was started when he realized that the features of different animals are shaped to fit their specific environment. Can we expect the same observation by Hiccup?

Let’s take a look at what he says at the very beginning as well as the very end of the movie:

“This is Berk. It snows nine months out of the year, and hails the other three. What little food grows here is tough and tasteless. The people that grow here, even more so.”

Not only does he note the aforementioned tendency of living things to adapt to their surroundings, he also realizes that the same rules apply to people and plants. It seems like the Vikings’ next scientific breakthrough is just around the corner.

Both movies show that you don’t have to have an academic background to act like a scientist. Instead, you only need a sharp mind and the motivation to use it. Also, in both cases the application of the scientific method is used as a starting point for the main part of the plot. The message in this is clear, and it is a message that we as a species should always keep in mind: Without following our natural curiosity and without the rational deciphering of nature’s patterns, we will forever be trapped in a lonely tower, haunted by dragons, lost in a world that we do not understand.

The author is a PhD candidate in neuroscience working and living in Germany. He gives regular talks about critical thinking and scientific reasoning and is a frequent visitor to his local movie theater. 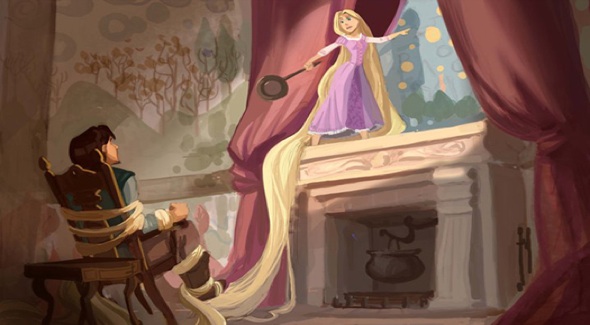 [Any other pro-science protagonists in 2010 animated movies? Or any in the 2011 lineup? Sound off in the comments! – Ed.]

4 Comments on “The Dragon-Haunted World: The Art of Science in “Tangled” and “How To Train Your Dragon””