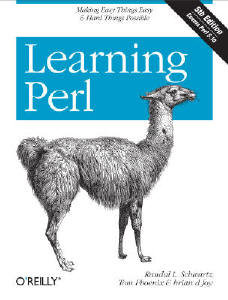 Lots of shaggy animals in this book. You can tell.

Learning Perl, 5th Edition is a great book that you should definitely buy whether or not you are interested in Perl specifically. It is engagly written, and the plots and characters really speak to me. Like when they have graphs or tables that tell you what is going on in the book even when the text is a little less clear, which happens, because this is a complex book with a rich texture. This is a high-level, general purpose, interpreted, dynamic book that exists in multiple paradigms at once and has a lot of cool things to say as it reflects about class and objects.

I am not just saying this because Randal Schwartz is a friend of this website who has appeared as a guest on our totally awesome podcast. Book reviews in major publications and media outlets like this one have to confront the reality of traveling in the same social circle all the time. Do you think The New York Times says nice things about books just because they are written by either their friends, or people they like and would want to be friends with, or the kind of people they sort of share a kinship with and want to be like and impress? Or that they say bad things about books by people they don’t like? Let’s not be silly.

Learning Perl 5th Edition is a magnum opus, a triumph of the human spirit, and the feel-good book of the year. It’s like Forrest Gump meets Ordinary People meets Beloved meets the owner’s manual to a really sweet dune buggy.

You should buy it. Buy buy buy. Obey what we say and consume.