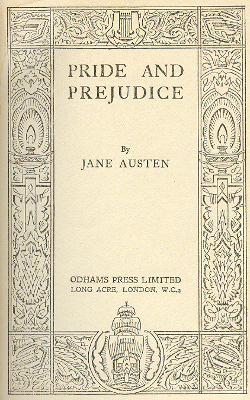 This is the cover of the book. It looks boring.

This is an okay book, which I can say even though I haven’t read it. A lot of the ladies like this book, which is kind of funny, because when I think of people who are prejudiced and proud of it, most of them are dudes.

Like, dudes are all up on themselves about how much they hate on people based on rules they determined beforehand. Like, they’re all “Fuck Derek Jeter!” even though they haven’t met him, so how do they know to hate him so much? That is I guess another way of saying that these guys are proud and prejudiced.

Although I guess it is kind of more acceptable nowadays for a lady to also be prejudiced, at least as much as it is okay for a guy to be prejudiced. Like, racist women aren’t as afraid of being racist just because they are women. It’s like progress, but progress that also has irony and isn’t really progress. Which is what novels are about in general, I think.

It’s like “Yeah, I hate immigrants, but I’m a mom, too!” That’s Pride and Prejudice. The concept. The book I am not so sure, because I have not read it.

There was a lot of talk I think about a zombie version of the book, but whatever. If I want zombies, I can read a regular zombie book.

Oh, and Colin Firth is in one of the movie versions of this. I know this because every woman I know has fantasized about him in this movie.

Sometimes they talk about Colin Firth to themselves or each other when they don’t think I am listening. Like in their sleep. Or during the physical act of love.

13 Comments on “Underthinking It: Jane Austen’s Pride and Prejudice”