We’ve all heard that history is written by the victors. Politics demand that whoever possesses power must be illustrated as a hero, while his or her rivals are painted as villainous threats to the established order. So how is history rewritten when the other side wins? Clueless and Mean Girls would have been the same story, if not for their different outcomes.

In both films, a red haired interloper gets taken under the wing of the blonde Queen Bee and ends up challenging her rule. Clueless is written from the point-of-view of the benevolent Queen Bee who is able to maintain her power, while Mean Girls is told from perspective of the successful usurper. The differences between the two films in terms of tone and narration are directly related to who holds political power at the end of the film.

Up until Cady’s successful coup d’etat in Mean Girls, the similarities between Cher and Tai’s relationship in Clueless and Regina and Cady’s is almost uncanny. Cher and Regina are wealthy, blonde Queen Bees who get whatever they want. Tai and Cady are redheaded outsiders who are forced to move and start life at a new school filled with social norms they don’t understand. Both Tai and Cady also have connections to the thematic idea of the “noble savage” (which, of course, isn’t necessarily an accurate part of Rousseau’s social contract theory, but is culturally associated with it). The first insult Tai receives upon entering Bronson Alcott High School is Amber’s comment, “she could be a farmer in those clothes”. Cady is entering suburban Chicago life after literally being transplanted from the wilds of Africa. 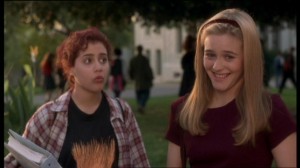 In both cases the Queen Bee takes the hapless new girl under her wing and remakes her into the image of a popular girl. This change occurs when the girls embrace a new value system based upon surface appearance and possessions—parts of society Rousseau warned would corrupt man’s nature. Both Tai’s and Cady’s introduction to the reigning clique happens in gym class (though Cady watches from a distance—an important divergence we’ll get to later). Both new girls are at first attracted to the more ‘alternative’ crowd at school. The girls make fools of themselves at their first party, and it is at these parties that the tall, dark, dreamy-eyed object of their affections opts for the Queen Bee instead. And in both stories, there is a clear moment where Tai and Cady overtake Cher and Regina in political status.

How is it then that Cady succeeds in ousting Regina from power and Tai fails? What makes a revolution stick?

First, we should examine how Cher handles her Queen Bee status in contrast to Regina’s. Cher doesn’t ever directly address the fact that she is the most popular girl in school. She lets us know she is one of the most popular girls, and we know that she has more influence over Dionne, Summer and Amber than they do over her, but we never see her really abuse this power. There are no “rules” about dress code or dating or events. Cher has to consistently put Amber in her place with snappy comments, but Cher’s ire is usually raised by Amber’s own egotism. Summer has her own autonomy and is respected by Cher as a source of information. As Cher’s best friend, Dionne is less a lady in waiting, and more of a courtly confidant and advisor. These girls are not afraid of Cher the way Gretchen and Karen are of Regina. They legitimately respect her. Do they have a right to, though? Or are we just seeing things through Cher’s rose-colored “is this a Noxema commercial or what?” glasses? After all, we’re seeing the story from the eyes of the victor. 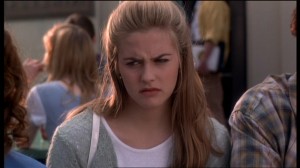 Cher is just as judgmental of the rest of the school as Regina is. She is just as manipulative. Cher haggles with her teachers to get better grades and with her father to get her way at home; Regina deploys charm and deceit to get her classmates into trouble and to control her own mother. Both mock students and teachers alike, and both are masters at the cruel art of the false compliment. Cady looks on in horror as she realizes that when Regina tells a girl that some article of clothing is “adorable”, she is really sneering at it behind that girl’s back. It’s emotional manipulation. Likewise, Cher falsely tells Tai that Elton likes her in order to further her own purposes. In both cases, there isn’t any huge degree of harm done, but it’s symptomatic of both Regina’s and Cher’s need to lie in order to maintain control.

There are thematic flourishes in both Queen Bees’ lives that are supposed to connect them with specific historic moments. Cher’s and Regina’s homes could both be seen as a metaphoric Versailles. Cher’s palatial home is filled with art and is a place where Tai can learn about buns of steel and how to use the word “sporadic.” When Cady enters Regina’s mansion, however, she encounters symbols of debauchery (Mrs. George slyly giving the girls the opportunity to drink), dissolution of morals (8 year old Kylie gyrating to Kelis), and the obvious misallocation of resources (Queen Bee or not, Regina should not inhabit her parents’ master bedroom). 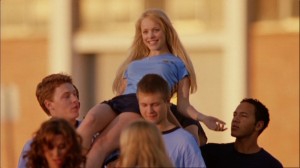 There is also something metaphoric in Cher’s protracted virginity. It connects her to one of the most successful female monarchs in history: Queen Elizabeth I. And if we’re looking for symbolism in the British monarchy, the United States successfully ceded from Great Britain while under the rule of a mad King George. Finally, in Mean Girls, Gretchen has a breakdown in which she compares herself to Marcus Junius Brutus and Regina to Caesar. What these references show is that there is an important difference between Cher and Regina.

Throughout Clueless, Cher is concerned with doing good deeds. The fact that she played matchmaker to her teachers may have been inspired by her selfish desire to get better grades. However, Cher’s actions result in the improvement of not only her life, but her teachers’ and every other students’. Yes, Cher constantly remarks about how doing good for others boosts her self-esteem, but she is improving the lives of those around her. She watches her father’s health, convinces Josh to lighten up and have fun, and elevates Tai’s social status through attention and education. You could almost say that without Cher’s intervention, everyone else’s lives would be “solitary, poor, nasty, brutish, and short.” And unlike Regina, when Cher finds her grip on power fading, she doesn’t resort to fanning the flames of chaos. Rather, she looks within herself to figure out how to make herself a better person. Like an ideal monarch, she heals the political rift in her society by looking within, improving herself, helping her people (the Pismo Beach disaster relief) and resorting to diplomacy to deal with Tai. 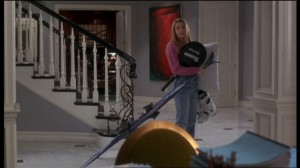 In the end, Cher’s altruism may be what saves her reign, for unlike Regina, Cher tries to live up to her end of the social contract. If Regina can’t rule, she decides that no one can. She hurts her society by pulling a wiki-leaks and releasing the contents of the Burn Book, thereby causing complete anarchy. As a result of this anarchy, Ms. Norbury is forced to educate every girl in the school to look at herself as a flawed, but valuable individual. Regina’s temper tantrum has the unintended effect of setting up a new democracy. Of course, Regina also failed because her opponent, Cady Heron, had more resources than Tai Frazier. One resource in particular named Janice Ian.

It’s important that in Mean Girls Cady is befriended by the art freaks first. Her loyalty is to them. In Clueless, Tai meets the stoners (and Travis) after already being adopted by Cher and Dionne. By being exposed to forces that represent art, alternative thought and rebellion first, Cady is primed to question the political status quo in her school. Tai, on the other hand, is taught to disdain this group as aimless losers. What if Tai had met Travis first? Would she have been offended enough by Cher’s dismissal of her first friend to keep her eyes open for flaws in the Queen Bee’s perfect façade? Some might say that Tai is too simple-minded to have overthrown Cher, but we only see her from Cher’s perspective.

If Cady had been seen only from Regina’s point of view, we wouldn’t have had as high an opinion of her intelligence. Regina literally calls Cady a “jungle freak”. She sees Cady as naïve and without any social skills whatsoever. Like Tai, Cady’s lack of socialization is supposed to reflect her intelligence. We never see Tai in a class, so for all we know she could also be exceptionally good at math. That doesn’t matter though. The thing is Cady doesn’t overthrow Regina George because she’s smarter than her. Cady overthrows Regina because she is acting on Janice’s advice. Without Janice’s guidance, Cady never would have been Queen Bee—nor would she even have entertained the thought of overthrowing Regina. Sure, she would have still been upset that Regina stole Aaron Samuels, but without Janice and Damien to turn to for advice, she probably would have fallen right back into line with Gretchen and Karen.

In essence, the reason Regina was overthrown is the same reason any dictator is eventually overthrown: the monarch breaks the social contract with his or her people and those people have been prepped by cultural illuminati with new ideas about government rule. The revolution needs a villain, but it also needs a mastermind. American colonists were pissed off about no taxation without representation, but would they understand that they could do something about it had they not already been influenced by the words of Locke, Rousseau and Paine? 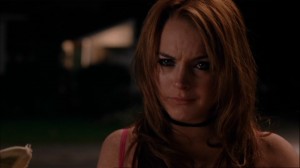 Clueless and Mean Girls also examine how power has the potential to corrupt. We see how Tai and Cady become the worst versions of themselves once they are thrust into positions of power. When Tai enjoys her brief moment of popularity, she becomes even more demeaning than Cher ever was: “Excuse me, but don’t the slackers prefer that grassy knoll over there?” She later realizes how power has corrupted her and relinquishes her role. Cady, on the other hand, needs everyone around her to point out how being Queen Bee has destroyed the goodness in her and it takes a full-scale rebellion and social exile for her to examine herself. In watching how Tai, Cady and Regina all handle their power, we see that Cher is rare example of a benevolent monarch. She is able to keep her status as Queen Bee because she lives up to the moral responsibility of high school’s social contract.

Even though Machiavelli wrote that “it is better to be feared than loved,” he was writing for a prince. Clueless and Mean Girls suggest that the rules are different if you want to be a queen. 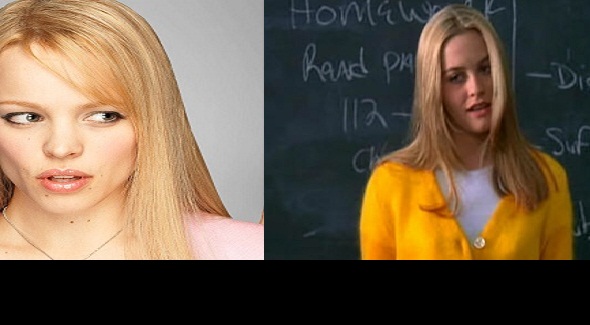 Meghan O’Keefe is a writer and comedian living in New York.

13 Comments on “The Divine Right of Queen Bees”