The My Little Pony toy line has always been a flashpoint for debates on gender representation and consumerism, and its latest incarnation in the animated series My Little Pony: Friendship is Magic is no exception. Kathleen Richter at the Ms. magazine blog mounted an attack on the show, calling it “homophobic” and “smart-shaming” – criticism that comes off as a bit incoherent because the show is neither of those things. Creator Lauren Faust, who previously worked on The Powerpuff Girls and Foster’s Home for Imaginary Friends, writes in her rebuttal to Richter that in developing this series she wanted to show that:

Cartoons for girls don’t have to be a puddle of smooshy, cutesy-wootsy, goody-two-shoeness. Girls like stories with real conflict; girls are smart enough to understand complex plots; girls aren’t as easily frightened as everyone seems to think.

In that respect she has succeeded. My Little Pony: Friendship is Magic (hereafter referred to as MLP: FiM) is sharply written and gorgeously animated, and features positive role models in female characters who defy stereotypical gender roles. The show also teaches lessons about confidence, self-expression, and overcoming adversity.

But the strong feminist themes of the series are built on a foundation of political contradictions. The most fantastic element of the show is not that ponies can talk or that dragons exist; it is the illusion that an egalitarian society can be maintained among groups with massive biologically inherent gaps in ability and economic utility. By even the most cursory of sociological and economic analyses, the society in MLP: FiM should be highly stratified along class and racial lines. And there are clear signs of that stratification, except they are obscured by a propagandistic focus on the power of “friendship”. 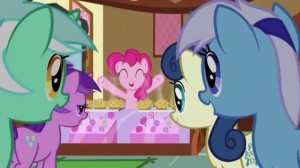 Now I know the question you all must be asking: “But don’t the historical theories of capital accumulation presuppose a world defined by scarcity and industrial development?” Of course they do. The setting of MLP: FiM, a land called Equestria (and specifically the city of Ponyville), is populated by three types of ponies. There are the earth-ponies, the most mundane type which most closely resemble real ponies. There are pegasi, flying ponies that are able to manipulate the weather. And finally, there are the unicorns, horned ponies that have a wide portfolio of magic powers, including telekinesis, alchemical transformation, and teleportation. There are also other sapient species in Equestria, such as cows; the concept of one intelligent species keeping another for milking purposes is quite disturbing if interrogated closely enough.

One potential objection to an economic analysis of MLP: FiM is whether such analysis is even warranted. The economy of a fictional world may be abstracted without consequences in some stories; after all, any flow of capital in Harry Potter is insignificant in comparison to the existential battle between good and evil that is at the core of the story. However, many of the stories in MLP: FiM focus on the performance of economic tasks: crop harvesting, production of baked goods, and the maintenance of the town. Other episodes are about characters finding their roles in society. These kinds of stories rely on a plausible economic base to be meaningful.

In fact, most of the stories written by Faust and her staff, although ostensibly about the power of friendship, also happen to be about the allocation of scarce resources (“Ticket Master”), correcting inefficiencies in the organization of labor (“Winter Wrap-Up”), or averting famine in the city of Ponyville (“Swarm of the Century”). Several of the threats in the series—the prospect of eternal night, an infestation of locust-like pests, and a blanket of dragon’s smoke over the town—are presented in the context of permanently crippling Ponyville’s economic productivity. Unlike The Smurfs, which proposed a fantasy world centered on a collectivist community, Equestria has a market economy through which a wide variety of goods and services are bought and sold. And in this economy, there is an equivalent to industrial technology: unicorn magic. 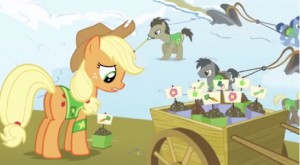 Other stories which make use of magic in their settings usually have a caveat which prevents easily equating magic with industrial technology. Perhaps magical power is biologically tied to rare individuals, or is physically debilitating, or has effects that are dangerous and unpredictable, or is restricted by a higher power. Any of these caveats would make magic problematic as a source of increased economic efficiency. However, none of these applies to magic as presented by MLP: FiM.

For a case study, take the episode “Applebuck Season”, which teaches the lesson that it’s OK to ask others for help if you need it. On closer examination, there’s an economic lacuna hidden in the premises and everyday workings of the episode. The story follows Applejack, an earth-pony, as she attempts to harvest her family’s apple orchard by herself after her brother is injured. The process of apple harvesting is shown in very specific, step-by-step detail: Applejack walks to a tree, kicks it to knock the apples loose, collects them in an apple basket, and then walks to another tree and repeats the process.

However, at the end of the episode, Applejack accepts the help of Twilight Sparkle, a unicorn. In the final harvesting scene, Twilight Sparkle is shown using telekinetic magic to pluck hundreds of apples from dozens of trees simultaneously; then she floats all the apples across a great distance to their buckets. Combine this with her ability to teleport from place to place at will and the process is staggeringly more efficient than what a mundane earth-pony can achieve. Applejack’s livelihood depends on selling these apples at market – she even claims in one episode that she needs to pay for her grandmother’s hip replacement. So the question becomes: why hasn’t she been run out of business? Any unicorn running an apple orchard would be able to harvest with a significantly lower investment of labor, and therefore be able to sell those apples at a discount far beyond what any earth-pony could hope to achieve.

The situation would be less problematic if this degree of ability were limited to Twilight Sparkle alone. However, unicorns as a race inherently possess some level of magical power. Twilight Sparkle may be in the upper echelons of ability, but Rarity, the other unicorn in the central cast, can telekinetically stop and redirect high velocity projectiles; she also transforms a tree branch into a series of perfectly manicured leaf sculptures with a single thought.

The pegasi can perform functions that the unicorns cannot, such as repositioning clouds to create rain or flying to guide migratory birds. But where does that leave your proletarian earth-pony? It certainly wouldn’t be as co-equal participants in the economic life of Ponyville. There are rudimentary stabs at the development of mechanical technology by earth-ponies, as seen in the character of Pinkie Pie. In fact, Pinkie Pie is the best representation of the tension between the show’s strong feminist themes and its questionable economic foundation; although she appears to be the ditzy party animal of the group, she also displays considerable skill in science and engineering. She devises a technical solution to Ponyville’s infestation problems in a scenario where magic has failed, and in the episode “Griffon the Brush-Off” she channels Leonardo da Vinci and builds a flying machine in order to keep up with the pegasus Rainbow Dash. However, Pinkie’s flying machine is smashed by a jealous griffon, showing that technology can be destroyed or expropriated more easily than innate magical ability can. 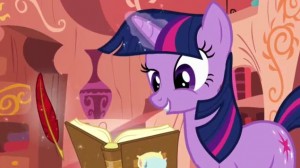 There is ample evidence that Equestria is already highly stratified, and the mantra of “friendship is magic” is nothing more than a mythic-religious creed designed to perpetuate false consciousness among the ponies. For confirmation, take a look at the professions of the main cast. The two earth-ponies work in agriculture and the service industry. Of the pegasi, Fluttershy can be classified as a naturalist and Rainbow Dash aspires to be a pro athlete.

In contrast, the two unicorns work in the professions that have the most cultural and political cachet. With the fashion designer Rarity, Faust does avoid portraying the mindless consumer typical in girls’ cartoons; Rarity’s character traits show that she is more than a clothes horse and has an engagement with the fashion industry “not as a shopaholic but as an artist.” And as a business owner, she is certainly a figure to aspire towards. But how much of her success can be attributed to the fact that textile production and delicate piecework is much easier when you have magic at your disposal?

As for Twilight Sparkle—the protégé of the ruling monarch Princess Celestia—she seems to control the means of knowledge production in Ponyville. She has access to unfettered telecommunications through Spike, her dragon companion. She also lives in the town library; how many books in that library were written by unicorns as opposed to the other pony races? (Not to mention the voices of griffons and dragons and cows, which are most likely also marginalized in the Equestrian narrative?) Whenever a non-magical pony tries to write, the image is comical at best; they must hold their implements awkwardly in their mouths. Unicorns, on the other hand, can easily manipulate and create texts using magical power. Twilight Sparkle drafts documents simply through the power of her mind.

With this inherent publishing bias in Equestria, how slanted is the historical narrative towards the unicorns? Small wonder that “Winter Wrap-Up”, a story entirely about Twilight Sparkle’s attempt to find her role in society, ends with her discovering that she is best suited for managing the laborers in Ponyville and succeeding at a task that the earth-pony mayor has been trying for years to accomplish. The episode’s titular song also betrays Twilight Sparkle’s bourgeois anxiety at the fact that her magic (and thus her economic advantage) is restricted in this single situation by social convention.

The fact that Equestria is governed by a monarch that is also the creator-goddess of the world is the real capstone of Equestria’s thinly-veiled social stratification. Princess Celestia possesses the horn of the unicorn and the wings of the pegasus. However, since pegasus and unicorn have all the physical characteristics earth-ponies have, the earth-ponies’ representation in the embodiment of their own deity can only be assumed; it’s a virtual presence at best. Do earth-ponies experience body dysmorphia when they realize they don’t have horns or wings like their princess-creator and the other races of Equestria? If your society is governed a literal god-empress, the focus on “friendship” may be nothing more than an attempt to suppress racial consciousness and dissent.

And in fact, perhaps Ponyville can be seen as a site of resistance for earth-pony culture; the prohibition against magic during Winter Wrap-Up is a gesture, however token, against the complete dominance of their goddess’s magic in their daily lives. A stronger and more visible sign of dissent is sadly improbable in Equestria; the difficulties of overthrowing a ruler who literally controls the movement of the sun would prove daunting to even the staunchest revolutionary. Unless, of course, Pinkie Pie were to construct a machine that replicates this function…

Oscar Moralde is a filmmaker and writer whose work can be seen at The Hypermodern and The House Next Door. 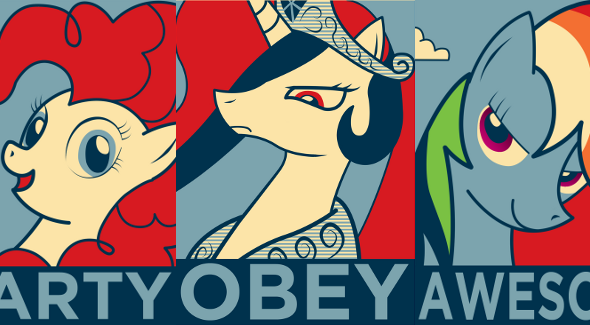 [Can magic unicorns be reconciled with scarcity theories of economics? Do pegasi and earth ponies have different utility functions? Sound off in the comments!]

64 Comments on “Solidarity is Illusion: The Political Economy of My Little Pony: Friendship is Magic”