I was about to polish off an article on whether or not Amy Adams passes for a high jumper in her Oscar-nominated turn in The Fighter (spoiler if/when I do finish it: she doesn’t) when this huge piece of news came over the wire, announced by Geoff “InControl” Robinson: Russ, the founder of GosuCoaching, has assembled and funded the North American Star League—an apparent American counterpart to professional Korean StarCraft leagues and championships (such as GOMTV’s Global Starcraft II League or the World Cyber Games) that have held almost mythological status for gamers around the world for years.

Well, despite being quite fond of Starcraft 2, I’ve spent some time recently on the site bashing it, so I figured I’d give it some equal time and talk about this development, which may or may not endure, but is important whether it succeeds or fails.

What makes the North American Star League special? Frankly, the prize pool — $100,000 in prizes for the first two seasons and $200,000 for the third season. These are the numbers that turn heads – numbers that can go a long way to sustain the livelihoods of professional StarCraft players. In Korea, where StarCraft is an institution, and where StarCraft 2 has yet to truly surpass the original, six-digit payouts are not unheard of for tournament winners, and five-digit payouts are common. There are larger numbers that go out in the form of endorsements both inside and outside the United States for professional gamers, but prizes on this level for U.S. StarCraft tournaments have the potential to be a game-changer.

The payouts in Korea for playing StarCraft are so much higher than anywhere else that progamers specializing in StarCraft generally have to move to Korea to hope to make a living, which in turn weakens prospects for domestic professional scenes. Neither America nor Europe can truly feel legitimate in pro StarCraft gaming with their best players playing somewhere else.

What does this mean to non-StarCraft fans, and what is eSports? More after the jump —

Why does StarCraft matter? Because it has long been the flagship game of eSports, a movement to legitimize video games as a mainstream spectator sport. In South Korea, StarCraft matches between top professional players are broadcast on multiple television channels, and the Internet cafe is as ubiquitous a hangout as our sports bars. Major corporations (like Sony, Korea Air, Intel and others) offer sponsorships that total in the millions across leagues. Somewhere between 1998 and now, StarCraft in Korea passed a tipping point, and video game enthusiasts in the United States or elsewhere hoping to see video games rise to the same level of legitimacy as athletic competitions have pinned a lot of their hopes on the video game that has already made it once.

North America already has plenty of professional gamers – Major League Gaming is the biggest name in the U.S. pro gaming circuits, but it is more diversified across titles, with a bigger focus on first-person shooters and fighting games. And while you still see the occasional six-figure payday in an MLG matchup in one of the more popular titles, MLG doesn’t stand up to the Korean leagues in StarCraft, nor does it carry their mystique or prestige.

So, the answer is, StarCraft doesn’t necessarily have to matter, but StarCraft has succeeded in cultural ways in which other games have failed. It seems to be the title that has mattered most in advancing the culture of gaming into the mainstream, and it seems to possess some quality that makes it more likely to succeed as an eSport than a Street Fighter or Halo title. (At least that’s the belief among StarCraft fans, which is admittedly hugely biased, but, I think, still interesting.)

Korea also has all these other genres of games. The dominance of StarCraft there is perhaps overstated because its presence is so conspicuous, and the success of StarCraft 2 there on the level of StarCraft: Brood War is by no means a given. Plus, the World Cyber Games, while run by a Korean company, has moved its tournaments around the world for some time, and its last finals, in the United States, no less, awarded $250,000 in prizes in 11 games (among them CounterStrike, the other granddaddy of games that, along with StarCraft, has shown entirely unreasonable endurance over the years.

So, there are a lot of holes in the StarCraft myth – but it’s still a compelling myth capable of shaping history. And maybe the North American Star League can help push that myth further into reality. Maybe. It has many pieces in place, but has not yet proven it can execute on its mission. It has a goal of broadcasting games with a high-quality stream and high-production values five nights a week on a consistent basis – something no professional gaming circuit in the United States does, but it has yet to prove it can do so reliably. The money is as yet the only differentiator worth noting – while InControl is certainly a big name in StarCraft, and while the money will bring the attention of top players, it lacks the cache of a confirmed top-tier caster like Day[9] or Artosis, who are busy with many other one-off gigs.

In pro gaming, commentary is very important. It is often more difficult to figure out what is going on, even if you know the game, than it is in, say, football or baseball, because the players may have different views and so much is happening on the screen at once, and there is no way to have a “sky cam” that sees everything at one time. Top-tier commentators are in-demand, and it seems hard to believe the North American Star League will succeed without hiring or developing a top-tier commentator. 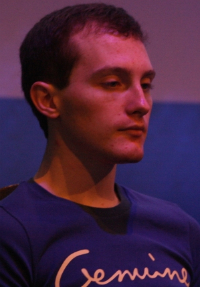 Perhaps the biggest draw of the North American Star League is the very likely presence of America’s most highly skilled pro gaming export, Greg Fields, a.k.a. “IdrA.” Fields is by far the most successful American StarCraft player – a few years ago, he declined a full ride to RPI to study theoretical physics to move to Korea and play StarCraft professionally. Among non-Koreans playing StarCraft 2 in Korea, he is only rivaled by Jonathan “Jinro” Walsh, a Swede who has beaten IdrA in several recent high-profile matches.

IdrA has a reputation for being very “BM,” or “bad mannered” in games, especially after losing. He is known for such affronts as refusing to type “GG” after losing a game or, more entertainingly, hurling obscenities at his opponents while complaining about imbalance in the game design. This is quite a step outside the norm in the even-tempered world of Korean professional gaming. “IdrA rage” is an institution among StarCraft fans, and IdrA-based memes are not too hard to find, even if you may have no idea what they mean. After one of the all-time StarCraft greats and huge general class-act, Lim Yo-Hwan, a.k.a. SlayerS_BoxeR (who in damatic Ted Williams-esque fashion left full-time professional gaming for a time to perform mandatory service in the Korean military) accidentally misspelled “Greg” as “Grack” in a chat, “Release the Gracken!” became a common call among StarCraft fans.

In the professional wrestling parlance, where the good guys (like BoxeR) are “babyfaces,” IdrA is StarCraft’s biggest “heel” – a beloved bad guy very popular among fans, especially in the United States.

IdrA recently announced plans to leave Korea and move back to the United States, most likely, according to speculation, to participate in the North American Star League.

Grack to the Point

Why does this matter? It all comes down to what exactly eSports is and what it is trying to accomplish.

Can you get professionals to play your game full-time? Well, if you pay enough, sure. Money can fix that problem.

Can you create superstars and media personalities to serve as brand ambassadors and get people to connect with your activity on a personal level? While this is historically quite difficult with video games, guys like BoxeR and IdrA make it seem possible. I would add that, as someone who also follows the Magic: The Gathering professional scene, there are a number of professional players who do a very good job as brand ambassadors and sports-quality superstars; I’ve been very impressed with what Luis Scott-Vargas has built over at ChannelFireball in recent years, and there are dozens of others in that game. But ESPN2 broadcast Magic the Gathering more than a decade ago, and we all saw where that went. By which I mean nobody watched it.

The biggest hope for a lot of these people is poker – the poker craze, driven largely by the innovations in the use of the pocket cam, the loose money of the economic bubble, and the democratizing effects of the Internet, has helped many to think their activity, too, if it is backed by sufficient money, if it can manufacture superstars, if it can be democratized by online access and if it can just get time in front of people’s eyeballs in the right way — it can also rise to the level of esteem of a “sport.”

10 Comments on “The North American Star League and eSports”