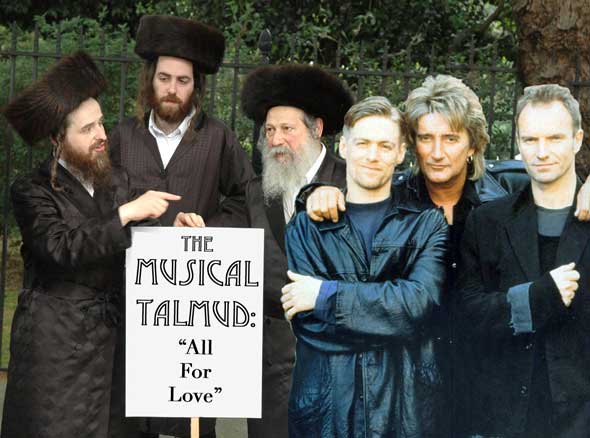 Warning: this music video, even taken in small doses, may cause you to spontaneously ovulate. Even if you are a man.

If the producers of Walt Disney’s 1993 version of The Three Musketeers had merely gotten Bryan Adams… dayenu. If they had gotten Bryan Adams and Rod Stewart… dayenu. But Michael Eisner took a hard look in the mirror, tapped into some of that Little Mermaid loot, and brought us a veritable perfect storm of middle-aged rock sexiness: Adams, Stewart, and Sting. If they’d only cast those three in the movie itself instead of just the end credits, it would have been awesome. Bon Jovi could have played d’Artagnan. 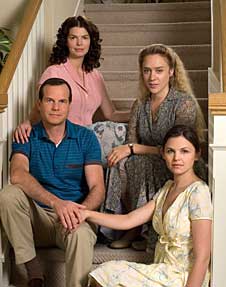 All for Big Love?

But here’s my question: are we supposed to imagine these three in a polygamist relationship with one very lucky (but very tired) woman? Or are they competing for the love of a woman, who has a difficult choice to make?  And for that matter, what makes us so sure the three of them are not singing to each other?

The answer, of course, is that we’re not supposed to think about it, and we don’t. It doesn’t strike us as strange. But maybe it should.

Sometimes we experience a song as a message from the singer to us. Take Bieber fever. He’s a cute kid (I’m told) and he sings sweet songs about young love. The Tiger Beat girls stand in the crowd screaming and tweeting. I may be completely wrong about this, but I believe a large proportion of the crowd likes to put themselves in the Keds of Justin’s beloved.

Other songs put us in the mind of the singer. Take “You Oughta Know” by You Can’t Do That On Television star Alanis Morissette.  It wouldn’t be much fun to listen to if you felt like you were playing the role of the ex-boyfriend. But when I hear that song, I’m always filled with righteous fury right along with her, standing up to everyone who ever mistreated me. Her voice becomes my voice. (No, I don’t feel weird saying that–it’s a great song.)

Duets make a lot of emotional sense. There’s a man and a woman, they sing to each other, their voices ring out separately and finally blend into one sweet harmony. It’s practically theater.

But what are we supposed to think when a group of men tells us, in unison, that they will hold us tight all through the night?

Boyz II Men is singing a song about what is clearly supposed to be a private, intimate experience between two people. In effect, the four men function, rhetorically, as one man. Note that the chorus goes, “I’ll make love to you,” not “We’ll make love to you.” Similarly, the Spice Girls sing, “If you wanna be my lover,” and not the more logical “If you wanna be our lovers.” 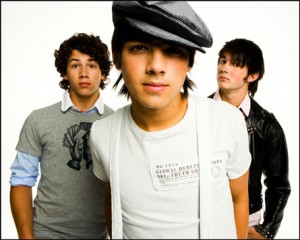 It would make sense if audiences had a harder time connecting emotionally with a boy group or girl group, because of the artificiality of four people communicating as a single unit. But in fact, the girls screamed for the Jonas Brothers as hard as they do now for Bieber. And that’s because for a fan of the Jonas Brothers, they are not the Jonas Brothers. There are “KEVIN and two other guys.” Or, “NICK and those lame-wads.” The listener can choose her/his favorite member and imagine the song is mainly coming from him or her. Viewed in this light, the fact that all the lyrics are in the first person isn’t a bug, it’s a feature. 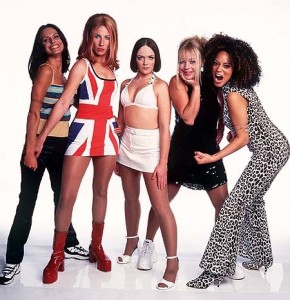 But of course, it’s not that simple. A boy or girl group isn’t just people singing to the audience side by side. Group cohesion matters. The key to the Spice Girls’ success, in my opinion, was their constant emphasis on friendship. It’s right there in their “you gotta get with my friends” signature song. Hens before men, as it were. If you watch their movie Spice World, and I recommend you do, they are pretty much completely uninterested in boys. Instead, they go out dancing with their pregnant friend, and then rush her to the hospital when she goes into labor. So the group’s fans all may have had a favorite Spice Girl, but they didn’t go to the concerts just to see her. They went to see the group.

Let’s get back to “All For Love.” Bryan, Rod, and Sting aren’t inviting you to a foursome, sadly. They are giving you the opportunity to focus on whoever floats your boat. But at the same time, the fact that they are similar kinds of artists is important. I know it’s important, because I’ve seen this:

That’s the same song, performed by Bryan Adams, Pavarotti, and two women off to the side who don’t get a word in edgewise. It is completely ridiculous. But Adams singing with Stewart and Sting wasn’t ridiculous, just as Pavarotti’s “Three Tenors” concerts with Placido Domingo and Jose Carreras weren’t ridiculous.

In other words: one for all, and all for one. And love.

7 Comments on “The Musical Talmud: All For Love”