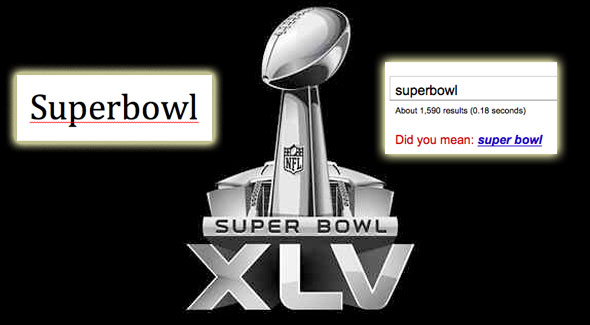 A few days after the 2009 Super Bowl,  I ran an article on Overthinking It warning of an American spelling crisis in progress. Our nation couldn’t even spell the name of our most sacred beer drinking related holiday, the SUPER BOWL, correctly. At the time, my analysis of Google Trends data indicated an alarming increase in the prevalence of searches of “Superbowl” compared to “Super Bowl.” Even our own editor, master of the English language that he is, had made the mistake on this site by using “Superbowl” in the title of a post. I was saddened and ashamed.

With this year’s Superbowl Super Bowl fast approaching, I thought it appropriate to update the analysis with new data to see if we are indeed in the throes of an American Spelling Crisis. 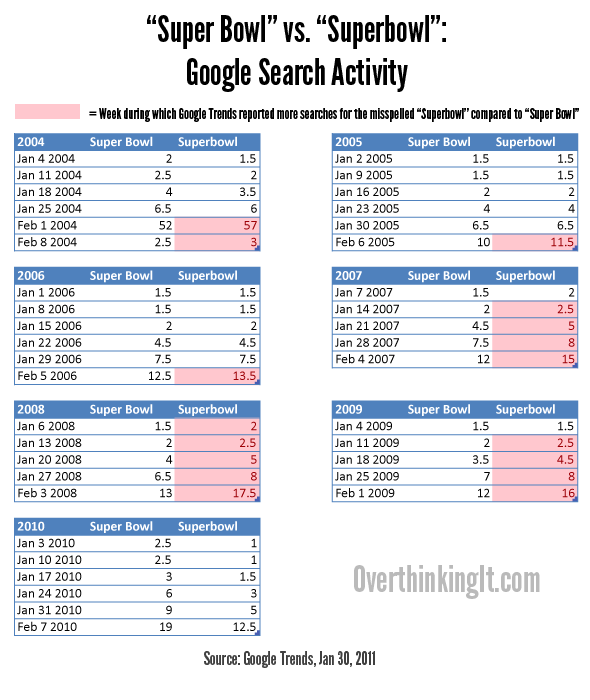 Ladies and gentlemen, CRISIS AVERTED. It appears that America used its collective Spell Checker and figured out that there is in fact a space between SUPER and BOWL.

Here’s another view of the data, aggregated by year, to reinforce the point: 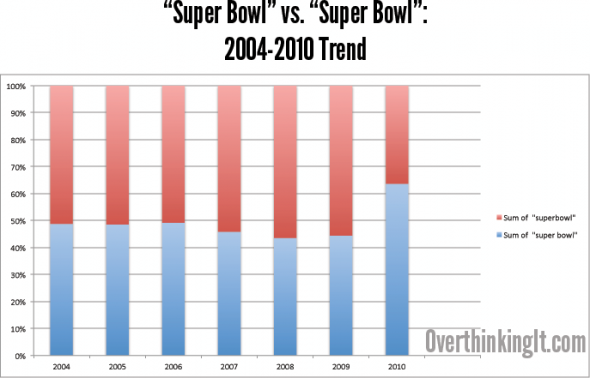 Of course, you can thank Overthinking It for raising awareness of the issue back in February 2009, which clearly led to the improved spelling in January-February 2010. And the early data for 2011 looks promising:

Once again, “Super Bowl” is in the lead. Suck it, “Superbowl”! Overthinking It wins a victory for insufferable pedants everywhere!

Joking and trash-talking aside, I do want to prompt a serious discussion on the proper spelling of the Super Bowl and the way we use the English language. There’s plenty of room to argue that “Superbowl” is actually a perfectly “correct” way to write the name of the football game that’s happening next week. As commenter Sariel Thrawn noted two years ago:

It seems that people are just making the assumption (and a logical one I feel) that this event is not an event (a bowl) that is “super” but rather that it is a singular event known as the “Superbowl.”

I don’t think it’s lazy. I think it makes perfect sense. Especially if you’re not a huge football fan and/or overthinker.

Sariel Thrawn has a fair point. Does our collective interpretation of the meaning of an event have the same kind of language legitimacy that authorities such as the NFL and the Microsoft Word spell checker have? I’ll let you all duke it out in the commints coments comments. Also feel free to speculate wildly as to the reason for the trend reversal in 2010 if you don’t think the causal relationship with my article is strong enough.

(And feel free to talk about the actual football game itself, if that is of more interest to you than arguing over spelling.)