“Give a boy enough rope and he’ll soon make a jackass of himself!”

So says the Coachman, the supposed antagonist in Disney’s animated classic, Pinocchio. Everyone knows the tale of Pinocchio and his well documented but poorly understood nasal malady. A lovable woodcarver named Geppetto, having never sired a child of his own and conveniently aware of this missed opportunity just as the wishing star appears, takes his case to the star. His enthusiasm for the occult pays off: Geppetto wakes up to find his most recent creation, a hand-crafted puppet named Pinocchio, is alive and wood.

Pinocchio embarks on a series of misadventures (including a run-in with a puppeteer and his strip show) that lead him to ‘Honest’ John Foulfellow and the Coachman. On the surface of things, the Coachman appears to be your typical vile trafficker of young children. Using Honest John’s talent for leading young boys astray, the Coachman and his lures them to a place called Pleasure Island. Pleasure Island is a state-of-the-art amusement park that sports an animatronics display that rivals those seen in today’s most sophisticated resorts. Unfortunately, the boys turn into donkeys once they’ve sufficiently trashed the place. These donkeys are then carted off to various salt mines and circuses worldwide. The Coachman scores a considerable profit for his efforts.

A closer look at the Coachman’s gambit, however, reveals a fatally flawed enterprise from a monetary perspective. The end product of what could be the then-Eighth Wonder of the World is the wholesale distribution of donkeys. You don’t have to be an economist to realize the futility in ever turning a profit with such an endeavor. 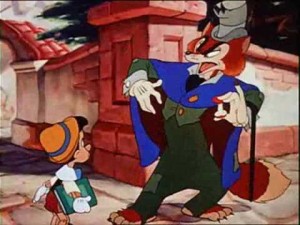 The venture’s origin can be traced to a meeting at the local pub between the Coachman and Honest John. Promising Honest John ‘some real money’, the Coachman plops an enormous bag on gold on the table. Honest John manages to lure a few dozen boys to an undisclosed location. The dollar amount of that bag of gold cannot be ascertained, but you have to assume Honest John is being paid a handsome sum. To avoid detection, he has to bait one boy at a time. He cannot pull a Pied Piper and lure these boys en masse to a life of equidaedous servitude; even bribed officials couldn’t ignore the spectacle of a parade of children heading to God knows where.

Yet however dear Honest John’s services are, they pale in comparison with the cost of bringing the boys to the island itself. The Coachman has to transport the boys to the island, and that means chartering a ship. This means hiring on a crew: a rather unscrupulous crew capable of turning a blind eye to kidnapping little boys and turning them into donkeys. He can’t risk having some hero sound the alarm at the sight of those boys making a midnight field trip. And the Coachman is not going to spend the next six weeks at sea on some sailing vessel; he is under enormous pressure to haul ass and bring his quarry in. This ship is a steamer. It is going to need fuel.

Shipping expenses notwithstanding, the Coachman’s purse strings are about to be stretched to the breaking point. Approaching the island via a man-made tunnel that must have taken an untold amount of time and money to construct, the ship finally reaches its destination, Pleasure Island.

The island delivers on Honest John’s promise – it is a dazzling array of some of the most sophisticated and ambitious attractions ever to grace the Earth. Among some of the amenities is a Ferris wheel that rivals the London Eye and a roller coaster made from some space-age material that can support the entire track without support from below. The latter is an engineering marvel that most likely sported a price tag that ran into the millions. How can the Coachman possibly recoup such an investment? 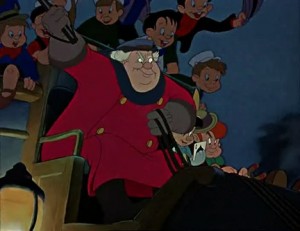 From what can be observed on the screen, approximately eleven boys can fit into the Coachman’s carriage. The larger carriage of the day ran a length of fifteen feet. A brief screenshot allows for a size comparison between the carriage and the steamer prior to the journey to Pleasure Island; the carriage spans the width of the ship’s beam. Using a simple method of calculating the ship’s length, we’ll assume the builders used a 1:4 width-to-length ratio to keep the ship stable and on top of the water. This brings the overall length of the ship to sixty feet, stem to stern. Allowing room for a pilot house and the ships quarters for captain and crew, we can surmise the usable deck area is about six hundred square feet. The boys are not going to stand for being transported on top of one another, so we’ll give them about nine square feet of room a piece; roughly in the region of one square yard. This allows enough room for sixty-six boys to travel comfortably, more or less.

Thus, one can speculate that sixty-six boys are on Pleasure Island at any given time. Unfortunately for the Coachman, this also means that the entire enterprise hinges on the sale of sixty-six donkeys! At the turn of the 19th century, the going rate for a well bred horse was in the neighborhood of $40; a donkey went for considerably less. The sale of sixty-six thousand donkeys wouldn’t be enough to cover expenses, let alone turn a profit.

It is obvious the Coachman is not motivated by greed. Pleasure Island’s chief architect is intelligent enough to know that the game isn’t worth the candle. Notions of financial gain put aside, what would motivate someone to take on such a drastic undertaking?

A detailed glimpse into Pleasure Island Inc. could reveal a noble cause. Though the film’s setting is unknown, the original story places the characters within the Tuscany region of Italy: the same region that produced the likes of Andrea Pisano, Filippo Lippi and of course, Michelangelo. Obviously things have taken a turn for the worse by the end of the 19th century. The local boys have run amok and no longer offer any contribution to the world at large; fist-fights, substance abuse, generalized anti-social behavior rule the day.

How the Coachman originally figured into this remains unknown. We can assume, however, that his methods of disciplining children have the full support of the populace. What else could possibly explain the fact that Pleasure Island exists? A system such as Pleasure Island can only function as a legal, publicly funded entity. Perhaps entranced by his rumored talents in operant conditioning, the local constituents hired on the Coachman as a last ditch attempt to control the downward spiral of a lost generation. Possibly motivated by personal experience – the loss of a loved one to the depredations of peer pressure for instance – the Coachman fits the role of both consummate professional and compassionate crusader.

The end of their journey finds the Pleasure Island boys transformed into beasts of burden. They come to understand the consequences of their poor decisions. Whipped, beaten, starved of affection, these boys spend a significant amount of time in their new forms. How long remains a point of conjecture, but we can assume the ‘punishment fits the crime’. The Coachman does indicate that the boys are not punished indefinitely but rather until ‘they can pay for it’. It remains a mystery as to whether or not things are handled on a case-by-case basis or for the Pleasure Island gang at large. There are no statistics regarding the rate of recidivism as well, though a repeat visit to Pleasure Island is highly unlikely and – from the Coachman’s perspective – undesirable. A second time offender could simply warn all the other boys and ruin any real chance of rehabilitation for that particular lot.

The Coachman’s incentive is clearly evident. A passionate man, he truly has the best interests of both a desperate society and its lost children at heart. His contribution to the science of behavioral modification cannot be emphasized enough. The ground breaking research of both Joseph Wolpe and Hans Eysenck nearly fifty years hence owes its very origin to the Coachman and the grand experiment known as Pleasure Island.

Miss Englert is an aspiring comedienne (just not a politically correct one) and writer who spends too much time thinking about this stuff. You can reach her at [email protected]. 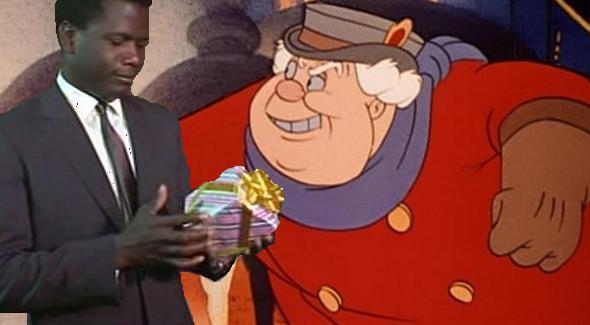 [Is the Coachman a noble educator? A greedy criminal? Some creepy white dude who kidnaps children? Sound off in the comments!]

One Comment on “To Coachman With Love: Pinocchio and Behavioral Therapy”