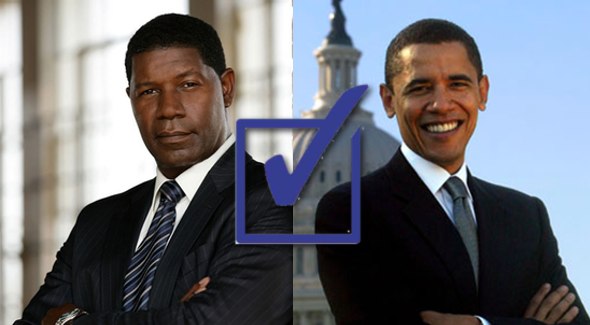 With the 2008 election of Barack Obama, change came to America, especially in Hollywood. The speculative “black president” genre was just getting started when President Obama’s election rendered such fanciful depictions as 24’s President Palmer and Head of State’s Chris Rock irrelevant. But future screenwriters need not worry; there are plenty of options left for “what-if” presidencies if you have the creativity to make it happen.

Before we start the list, let’s lay down some ground rules: animals might be able to make free-throws using their paws or teach Matt LeBlanc to connect with his teammates, but they’re legally ineligible for the nation’s highest office. However cute the prospect of “MVPP: Most Valuable Primate President” is, it’s best left to the dustbin of history. And while the notion of Arnold “Governator” Schwarzenegger in the White House is a marriage of pop-culture and Republican wish-fulfillment, his role as governor of California has had mixed reviews and not enough box-office to justify a sequel. So now that we’ve established some boundaries, let the presidential possibilities commence! 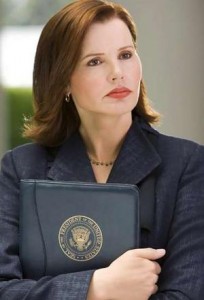 This one seems like cheating: what with Sarah Palin and Hillary Clinton’s roles in the 2008 election, the notion of a female president isn’t necessarily so “out there” as it once might have been. 24 had a female head of state, and Geena Davis starred in a short-lived show built around the premise on ABC. With Mama Grizzly Palin as the “popular girl who makes out with you to win your vote” Republican 2012 hopeful, the window of opportunity to make a film around the concept is rapidly closing.

Pros/Cons: What screenwriter couldn’t squeeze dramatic gold out of the premise of a working mother as the world’s most powerful leader? She has to deal with the pressures of home life—with unruly adolescent kids whose sense of entitlement comes less from their Secret Security detail and more from their job at Hot Topic—while also trying to prevent terrorists from upsetting the groundbreaking Middle East conference that will finally settle that whole pesky “Israel vs. Palestine” issue. Though, to be fair, such issues could take a back seat to the complaints of the “First Dude” about how emasculated he feels (because he’s referred to as “First Dude,” for starters). It’s the sort of role that Angelina Jolie could both excel in and ruin simply because her presence destroys the willing suspension of disbelief.

Possible scenario that would work: Let’s aim a little older than the typical “soccer mom” contingent of the audience, while also acknowledging the multiethnic future of the POTUS. Tyler Perry’s Madea character is an omnipresent cultural phenomenon, a pot-smoking, feisty, but ultimately moralizing grandmother figure who owns every room she walks into (often to the detriment of anyone else in the scene). It’s frankly shocking to me that Perry hasn’t made Madea in the White House yet (subtitle: Diary of a Mad Black President), but give him some down time in between “House of Payne” and “Meet the Browns” and he’ll knock it out before you can say Why Did I Get Married III: No, Seriously, Why the Hell Did I Get Married?. Madea would have a field day back-talking the incoming Republican majority (led by snooty Richard Dreyfuss), and she’d tell the terrorists what’s what. Plus, she’ll have time to toke up with Chairman of the Joint Chiefs Method Man while steering young orphan Willow Smith to the Lord. It’s what those of us in the business call “box office gold.”

Remember how I said animals and Austrian bodybuilders are off the table for possible presidential hopefuls in popular culture? That rule doesn’t apply to kids. Everyone loves kids, until they grow up and become sullen adults or Lindsay Lohan. If a kid can travel back in time to save King Arthur’s court or pitch for a major league team (granted, it’s the Cubs, so it doesn’t really count), they can run the free world. What could possibly go wrong?

Pros/Cons: What could possibly go wrong is everything; think about the last time you ever dealt with a kid who felt empowered because he wore a nametag or had a driver’s license. Think how big of an attitude he’s gonna have when he has the title of “president” backing him up. Sure, the kid starts out all cute, but then he hits puberty and suddenly he goes from “adorable” to “asshole in training.” Some child actors transition well from innocence to experience gracefully; not every former Mouseketeer is headed straight to rehab. Sure there’s the whole constitutional amendment about having to be in your thirties before you can even sniff at the Oval Office, but as the younger presidents (Teddy Roosevelt, JFK, Obama) have shown, you have a lot more energy if you’re on the right side of fifty.

Possible scenarios that would work: Justin Beiber has the world at his feet; he’s a multi-platinum pop star and (wait for it) his dad is president. But when President Beiber suffers a bump on the head and loses his memory, a little-known clause in the Constitution says that little Justin has to take over (bypassing the whole structure of government). Vice President Sam Waterston is super-pissed, of course, and so is the Congress, led by oldster Betty White. But Justin’s cool, and he starts off not taking it seriously but events take a dramatic turn when he falls for the daughter of the Secret Service chief (played by adorable gum-chewing Miley Cyrus).  Oh, and he has to do something about that buzzkill called the “recession.” Will President Justin save the day? If this film is aimed at the teen market, of course he will (though, to keep the girls interested, Miley has to go down in a haze of gunfire. That way, Prez Beiber Fever runs wild with the hope that anyone could be his First One Less Lonely Lady).