Here’s the scene: I’m in a karaoke bar in suburban Birmingham, AL. The audience is split roughly 50/50 black/white. Song selection during the evening was pretty unremarkable.

A black woman gets on stage and starts to sing “Redneck Woman” by Gretchen Wilson:

And then a white woman gets on stage to join her halfway through the song.

I couldn’t believe either my ears nor my eyes. Several days after the incident, I’m still trying to process it. Was this a post-racial moment? Or just a racially confused moment? Either way, it set my Overthinking It senses into overdrive, and I knew I had to hash it out in a post and get the opinions of our readers on this matter.

Before we get to the heart of the matter, let’s get our terminology straight. There are a couple of loaded words in the first few sentences of this article:

I know, this is ugly and monstrous, but sometimes the truth ain't pretty.

In our last article on the subject, OTI writer McNeil put forward the idea that the Black Eyed Peas, with their multi-ethnic composition, diverse fanbase, and positive lyrics about tolerance and cooperation, might represent the “post-racial” America that many were talking about around the time of Barack Obama’s campaign for and election to the presidency. In the larger political discourse, the idea that we’ve reached some sort of post-racial nirvana quickly faded when everyone took stock of the ugly resurgence of American racism in their midst (directed mostly at the President but also to other ethnic minorities, particularly Hispanic immigrants).

But as evinced by McNeil’s thoughts on the subject, the concept of  a”post-racial” America where race, if not doesn’t matter, then doesn’t divide us like it used to, is still a part of the political discourse. It’s attractive to us for obvious reasons. Americans across the political spectrum desperately want to break free of the divisive racial politics that have defined much of American history. After the Three-Fifths Compromise that encoded slavery into the Constitution, the Civil War, and the Civil Rights movement, America is both ashamed and weary of its legacy of racism. Hence the seductive appeal of the Obama presidency ushering in this new post-racial era. Elect a black guy to the presidency–problems solved, right? Wrong. The hard work and hard societal change needed to bring this “post-racial” state in America will take much longer than even two terms of an Obama presidency.

Maybe that strange “Redneck Woman” duet was part of this ongoing struggle? We’ll get there, but first we need to cover the touchy subject of the word…

The term “redneck” pretty unambiguously refers to a poor, white Southerner. That much is obvious. What’s less obvious is what the term “redneck” means beyond this surface definition. The most benign definition of “redneck” is that of a simple, unsophisticated person who lives in a rural environment and is maligned and misunderstood by big-city snobs. This is the view espoused in Gretchen Wilson’s song and music video, and the sentiment shared by those who have tried to reclaim “redneck” as a proud self-identifier. 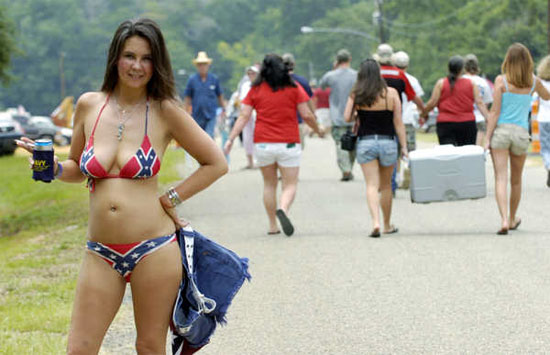 All of this is to say that “redneck” is a complicated word that has different meanings to different audiences. And audiences are important when it comes to karaoke.

Hey, speaking of karaoke, let’s get this context setting aside and finally get around to answering the question at hand:

Was it a post-racial moment when when a black woman chose to sing “Redneck Woman” at karaoke in Birmingham, AL, and a white woman joined her on stage? 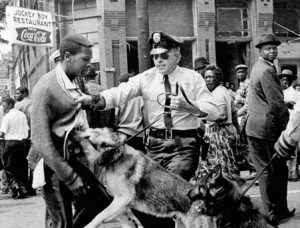 Okay, I lied. Just one last piece of context, and that’s the “audience” in the broad sense of the term. OTI readers outside of the United States may not be familiar with the reputation that the city of Birmingham, AL, has. Birmingham’s history is long and complicated, but I can sum it up by saying that most people think of the opposite of “post-racial” when they think of Birmingham. That is, they think about Birmingham’s history as a hotbed of racist and segregationist activity in the post-Civil War and Civil Rights periods of American history. Most notably, Klansmen bombed a black Baptist church in 1963, killing four young girls in a heinous act of violence that helped pave the way for the passage of the Civil Rights Act in the following year.

Yet in spite of this history, a racially mixed crowd had gathered at this karaoke club and was enjoying each others’ crooning without any hints of the racial tension that had largely defined the city’s history and its current reputation.

Into this mix stepped the aforementioned young black woman with her song choice, “Redneck Woman.” Halfway through the song, enter young white woman who joins in enthusiastically.

So was this a post-racial moment? Possibly, but only if everybody was on the same page about this song. First, and most importantly, the black woman who chose to perform this song must have done so without intending to specifically lampoon the racist tendencies of “rednecks.” It’d be OK if she were lampooning other aspects of “rednecks,” such as their preference for Wal-Mart clothes over designer labels, but if in her mind she was calling out “rednecks” for their racism, then she would be implicitly flinging this in the face of white audience members. And such an action would be decidedly not post-racial.

And lastly, the audience must be able to appreciate the irony of the moment and not perceive this as an assault on racial identity by either the black singer for choosing the song “Redneck Woman” or the white woman for joining in. 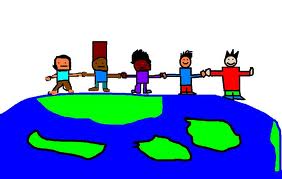 This was the first result for a Google image search for "racial harmony." No joke.

So to answer the question, “Was this a post-racial karaoke moment?” I wouldn’t go so far as to quote the song and give a hearty “Hell yeah,” but I would say, “Yes, at least partially.” But even so, just like with the election of Barack Obama, this small step forward in race relations by itself does not usher in a new post-racial era. No, it will take many, many more karaoke outings until that era has fully arrived.

(Did I just compare a night at a karaoke bar to the election of Barack Obama? Oh yes, I did. You’re welcome.)

8 Comments on “Is Gretchen Wilson’s “Redneck Woman” The Anthem Of Post-Racial Karaoke?”