Britney Spears has changed her tune, but not so as you’d notice. Her jab at the public is as sugarcoated as the pie she pretends to bake for the video. And the paparazzi should think twice about eating something offered by a woman on whose lawn they’re camping.

Her song titled IF YOU SEEK AMY sparked controversy. Its lyrics that say, “all of the boys and all of the girls are begging to if you seek Amy”, but sound like she’s saying they’re all “begging to F-U-C-K me”. It’s not the controversy that’s new for Spears (because, seriously – when isn’t she surrounded by controversy?) but the purpose of the alter ego Amy she has created for herself.

This mysterious character known as Amy only hits the listener on the four-hundredth time the radio plays it, and only after the listener can get over the Swear Word! And Controversy! Children’s Innocence! Amy is eclipsed by the controversy, making her literally hard to find, as well as figuratively in the story of the song. This shouldn’t be a shock given its title, but all the focus seemed to go on the obscenity in the title and not the title itself.

The first verse and refrain (“Have you seen Amy tonight?”) seem to be depictions of celebrity life, something Spears confronts all the time. She is familiar with everyone always looking for her and wanting to know trivialities about her like how she takes her drinks. (“Do you know just what she likes?”)

However, the second verse and subsequent refrain suggest that Spears is the one looking for Amy. She sings, “I’ve seen her once or twice but boy she knows my face”, which seems an odd thing to say by someone supposedly looking for a celebrity. She follows this line with, “But it’s hard to see with all the people standing in the way”, fusing the notion of Spears being Amy from the first verse with Spears looking for Amy in the second. Spears is metaphorically looking for herself in the crowd of people literally looking for her. It’s almost Shakespearean.

The video furthers the idea of a double life – one of Britney Spears on the morning after of what looked to be a sex party, and one of Britney Spears as a fifties housewife with 2.3 children and a husband baring a strong resemblance to Mattel’s infamous Ken doll. The two roles mirror her contrasting public personae over the years: the good girl versus the whore. The video, like the song, argues either the viewer or Spears herself or both cannot see her for who she is. Which fits, because seeking implies that the object in question has not been found. Maybe it is missing, maybe it has disappeared.

The first time Spears delved into the fascinating world of singing about yourself through an alter ego, she was eighteen and singing about “a girl named Lucky” back in the days when she was still being marketed as the sweet, virginal, girl-next-door, and before she became, “Mrs ‘Oh my God, that Britney’s shameless’”. Though Amy and Lucky were born in different eras, they both suggest a deep-seated dissatisfaction with the fast-paced, highly-scrutinized, celebrity way of life. And that can hardly come as a surprise; Britney Spears is forever being criticized in the media for being slutty, or a bad mother, or without integrity, or crazy or stupid-or-blond-or-Southern-or-Sagittarius.

Britney is hardly the only female singer under scrutiny, but she does seem to get the worst of it: Lady Gaga is actually respected (or feared) for her costumes and demeanor; Taylor Swift looks sweet and virginal, and got a lot of sympathy during the Kanye West fiasco; Madonna has been around long enough to garner some street cred from putting up with years in show-business. But Britney Spears? She doesn’t even write her own music! (Not entirely true.) She lip-synchs during her intensely aerobic shows! (She sings the songs she’s not dancing to.) She’s such a ho! (Where to begin?) These are reasons to condemn her!

So she comes out with “If You Seek Amy”, which people barely noticed as being semi-autobiographical. All she gets is people lobbying to get the song removed from the radio, and the video taken off the air, and more comments about her sluttiness having reached a new level.

And then there’s the chorus itself. At first glance it seems clever, how the lyrics seem to form a swear word. At second glance it seems kind of stupid, because the “seek Amy” interpretation doesn’t make sense, and it would be far more clever if both versions worked in the song. After these two stages of realization (and millionth listen), comes the inevitable thought that this was an intentional move. It could not have escaped the attention of Ms Spears and her team that these double lyrics only fit in the song one way, so why do it this way?

Because after years of being ridiculed and mocked and judged, maybe Britney Spears is mocking right back. She knows the lyrics don’t make sense – and she doesn’t care. The fact that it made it onto her CD is proof enough of that. She’s Britney, bitches! She can say it outright, how hot she is, how desired she is, how ALL of the boys and ALL of the girls are BEGGING for it. Her lyrics don’t even have to make sense and she can still sell a million copies.

“F-U-C-K me” might just as well be saying “F-U-C-K you”. Britney Spears can’t find herself in a crowd, but she can sure find photos of herself accidentally flashing the paparazzi on Google. The double interpretation in the chorus is her insult to the seekers. As though the “seek Amy” was an afterthought, a way to say, ‘No, of COURSE that’s not what I meant; I was just trying to be cute with the “F-U-C-K me” thing.’ Such a statement would be accompanied by a horribly sweet smile and a giggle that one might hear before meeting one’s bloody and untimely end. “Ha-ha, hee-hee, ha-ha-ho!”

Lucky “cry, cry, cries” but Amy is stronger. Amy is wiser. Amy is pissed off that if you seek Amy in the club, or smoking outside, or in her home while she’s playing with her kids, Britney Spears gets fucked. That’s what’s really obscene here: her message that says, “if you seek Amy” = “F-U-C-K me”. You might as well. You already have.

[How about it, readers? Is Britney Spears making meta-commentary on the virgin/slut dichotomy? Or is she cashing in on her bad reputation? Sound off in the comments! – Ed.] 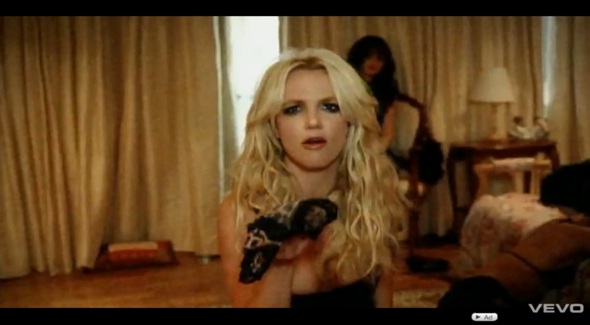