In 2006, two heavily-hyped shows premiered on NBC with different takes on the behind-the-scenes workings of a sketch comedy show in the vein of Saturday Night Live. “30 Rock” was a half-hour sitcom created by former SNL head writer Tina Fey. It’s still on the air today, one of the most popular and successful comedies of the past few years. “Studio 60 on the Sunset Strip,” was an hour-long drama created by Aaron Sorkin (“West Wing”). That show had good initial reviews and notable moments, but was also met with a lot of legitimate criticism and was not renewed for a second season.

Saturday Night Live, which both shows are heavily based off of, started out with seven cast members. Since then the show usually has a cast size of ten to fifteen. Even then, sometimes the cast can get stretched pretty thin for certain roles (e.g., Barack and Michelle Obama). There are a lot of sketch shows that use a smaller cast: The Frank Calliendo show (1 member), Mr. Show (2 members), Upright Citizen’s Brigade (4 members). These shows generally use camera tricks or guest actors to fill in the parts they need. A show filmed in front of a studio audience that requires celebrity impressions and a variety of sketches needs a cast of at least 6 or 7 actors.

This creates an interesting screenwriting dilemma. Both shows featured a cast and a meta-cast of actors on a show-within-a-show. How do you tell the stories of the cast of the Show Within a Show (SWS) and the production staff as well?

Both shows had interesting approaches to this dilemma.

Studio 60 On the Sunset Strip

“Studio 60” had a cast size on the SWS of seven. But only three of those were in the actual show. Those three SWS cast members also got the bulk of the attention on the actual show. “Studio 60″ came up with a nickname, “The Big Three,” to explain to the audience why the producers and directors would spend so much time talking to and about just three of their cast. Supposedly, these guys were the core of the show.

Like the rest of the show, this was a sloppy plot detail that certainly merits some Overthinking.

“The Big Three” is apparently some nickname that the press gave to those three performers. It must have been an incredibly common vernacular. In the opening episode, the SWS network staff (not the show staff, mind you, but the network staff) meets to discuss a crisis. Executive Jordan McDeere (Amanda Peete) used the term “Big Three” in conversation. The out-of-touch corporate head Jack (Steven Weber) had to interrupt to ask what the “Big Three” meant, at which point the rest of the room rolled their eyes at him.

The idea that the press would dub those three actors “The Big Three” helps us suspend our disbelief as to why three of the show’s performers get so much attention. But it raises a lot of questions for which there aren’t many plausible answers. How are these three performers – Tom Jeter, Harriett Hayes and Simon Stiles – some special core group of the show that warrants their own nickname? It’s not as if they have any common thread between them. They don’t all have a prior creative history together that informs their current output (like Jorma Taccome, Akiva Goldman and Andy Samberg on SNL).

In the “Studio 60” SWS, one of the “Big Three” is the Weekend Update anchor, and the other two were actors who didn’t appear to have any common thread between them. That’s it.

Also, these three make up nearly half of a seven-person cast. People can’t agree on anything when it comes to SNL performers. They may single out one or two stars (Eddie Murphy, Will Ferrell), but no one says “this half of the cast is better than that half of the cast.” It’s hard to believe that the press would buy into the nickname “The Big Three” to that extent.

Because “Studio 60” took itself too seriously, unrealistic mistakes like that weigh it down. Contrast that to “30 Rock” which has the same dilemma – and is similarly unconvincing.

The show focuses on Jack and Liz, especially in the latest seasons. The A and B plots are usually devoted to Jack and Liz with the C-plot alternating between Jenna or Tracy. The remainder of the cast members on the SWS, plus Kenneth, plus the additional production staff, receive much less screentime per episode. While there are many people we’ve come to recognize – Lutz, Twofer, Cerie – the focus of the show is still on Liz. 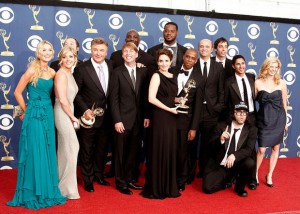 “30 Rock” has therefore decided to compress the entirety of a show cast into Jenna, Tracy and a half-invisible third character (played first by Lonny Ross and then Cheyenne Jackson). Lonny Ross’s Josh was an active part of the plot in the first season, than started to drift into the background during seasons two and three. The show reintroduced Josh in the fourth season in an episode where the characters didn’t know he still worked there (just like the audience). This allowed “30 Rock” to do a couple plots about hiring a new cast member, who became a central part of the show for a while but has since faded into the background.

Those two have been in 46 out of the show’s 97 episodes to date, so that pretty much accounts to half a cast member. We’ve never seen a single other actor for the SWS on-screen. In addition, it does not appear that the SWS has guest stars, despite the fact that “30 Rock” itself has had plenty.

So that leaves two and a half people on the show within-a-show. This is too ridiculous to even accept as a premise. “30 Rock,” however, doesn’t ask us to suspend our disbelief. And we’re fine with that.

Sketching Out The Details

Not every great narrative asks us to suspend our disbelief. We wouldn’t criticize a theatrical production for unconvincing scenery and props, for example. There are plays that might use everything at their disposal to make the background convincing. On the other hand, a great play might use a minimalist stage design with just a couple of re-painted lamp-posts as trees. We will generally accept both because realism is a stylistic choice when it comes to theater.

TV is different. Realism is not entirely optional. If you’re going to show a house on the screen, it has to look somewhat like a house. 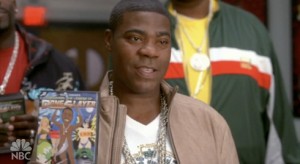 With “30 Rock’s” frequent breaking of the fourth wall, however, characters are aware of their genre and its limitations. Realism becomes optional. Characters in a TV show twenty years ago wouldn’t have this perspective, or this advantage. “30 Rock,” which is considered on the edge of sitcom writing for good reason, takes that a step further and has decided that certain concrete details like the size of TGS’s cast don’t have to adhere to reality. And it works. When you contrast that with “Studio 60” ‘s striving for realism, it becomes clear why one show is still around and the other isn’t.

[Did we even notice the cast size before it was pointed out to us? Do you think breaking the fourth wall is an acceptable substitute for realism? Sound off in the comments! – Ed.] 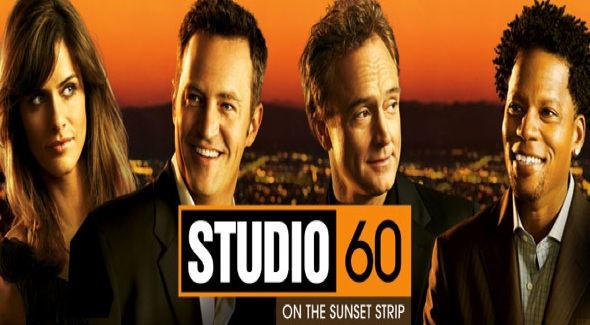 [Orrin Reade is the DC Film Industry Examiner for Examiner.com.]

16 Comments on “Not Ready For Primetime: Cast Sizes in 30 Rock and Studio 60”