“Double-consciousness,” coined by W.E.B. Du Bois, is cognitive dissonance from living as a marginalized group, wherein a person identifies, paradoxically, both with his own group and the dominant group oppressing him. Franz Fanon elucidates a similar idea (in Black Faces, White Masks), from a post-colonial perspective. Fanon says “violence is man re-creating himself,” i.e., a marginalized person reclaims his authentic identity through revolution, upsetting dominant social orders.

In TMNT, re-creation of self is symbolized by physical transformation, but attempts to refute Fanon by having heroes be those whose bodies/identities are transformed accidentally or involuntarily. Those who actively transform themselves to upset the power dynamics of the status quo are villains. 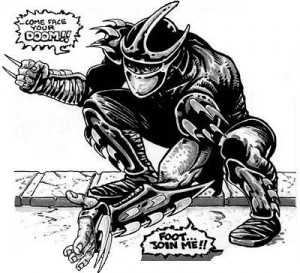 Oroku Saki was a member of the Foot, a Japanese ninja clan. He pursues his enemy, Hamato Yoshi (and Yoshi’s pet rat, Splinter), to New York. After murdering Yoshi, Saki remains in America and builds a U.S.-branch of the Foot, with himself as leader, recasting it as a criminal organization. In an interesting twist on the immigrant narrative, the refugee Yoshi flees to America to escape persecution, but the persecution follows him to finish him off. Saki comes to America for revenge, then, in typical capitalist fashion, realizes he can grab power by starting a Foot Clan “franchise.”

But Saki doesn’t just make himself leader, he forges a whole new identity, cutting off ties with the Japanese Foot and re-creating himself as The Shredder. Shredder is known for wearing head-to-toe metal armour, covered in bladed gauntlets, and concealing nearly his entire face with a mask. This way he attempts to overthrow his original external identity. Hiding his face, he can’t even be identified by his ethnic/national origin, which he’s attempting to transcend. In America, that masked man is simply The Shredder, a figure of power and awe. 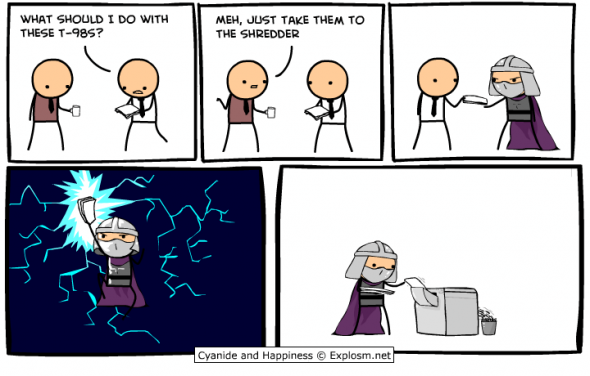 Later, Shredder is transformed and re-created even more literally. After his death at the Turtles’ hands (in the comics), the Foot use a combination of ancient mystical wisdom and alien technology to regenerate Shredder from his remains, with memories, personality and skills intact. Here is the ultimate re-invention of the self. Saki literally dies, his body is destroyed and recreated into a form that has only ever been The Shredder. 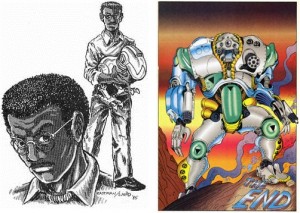 Stockman is a brilliant scientist and robotics engineer, but also a greedy, power-hungry egomaniac. In the original comic he’s African-American, which speaks to the double-consciousness of Du Bois. His race is never referred to, but it’s easy to read Stockman as a genius in a society where black men are stereotypically not “supposed to be” intelligent. His greed overcompensates for this internalized racism. He boasts about his brain-power and uses his robotic creations to steal rather than using his abilities to acquire money legitimately. He publicly subverts American law and capitalism just to show how easy it is for him.

Ultimately, Stockman discards his body completely, building a robot into which he transplants his brain. Like Shredder, Stockman reinvents himself through concealment within metal; he keeps the only part he identifies with (his brain) and throws the rest away.

The cartoon Baxter (portrayed as a stereotypical – and white – mad scientist), also undergoes a transformation, but it’s involuntary. A botched execution mutates him into an anthropomorphic fly. Interestingly, while Baxter-Fly is portrayed as villainous, he’s much more sympathetic than before his transformation. Cartoon-Baxter, never having suffered double-consciousness as a minority as comic-Baxter did, spends the rest of his life trying to become human again, i.e., to reclaim his privileged position as educated, white male.

The Turtles and Splinter

In contrast, our heroes the Turtles are transformed organically and involuntarily. The Turtles and Splinter begin their lives in America as ordinary animals but become “humanized” through unintentional exposure to mutagen (i.e., environmental factors). They accept their new identity but did not seek it out. It’s no accident that TMNT takes place in New York City: representative of the melting-pot, immigrant society where disparate identities meld together into a new whole.

The Turtles are unambiguously American heroes. They transcend

And though the Turtles and Splinter are marginalized far more than Oroku Saki or Baxter Stockman ever were, they don’t attempt to overthrow society. On the contrary, they fight against those forces that seek to overturn the status quo, forces symbolizing the conscious re-creation of self. 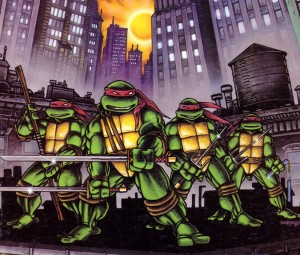 Heroes In A Half Mask

Whereas Fanon advocated that members of marginalized groups reclaim their identity through violent revolution, TMNT characterizes those who remake their identity to upset the social order as villains. Those who uphold the dominant social order are characterized as heroes, even as they are aware that this status quo oppresses them. In TMNT the good guys are those who don’t seek out self-transformation, but accept their hybridized identity.

TMNT shows Fanon’s link between violence and the active re-creation of self as negative. It argues ultimately that manufactured identity is inauthentic, inevitably based upon opposition to some perceived Other, and only leads to destruction. In America (and by extension the globalized world), identity is never a pure element in and of itself, but always a synthesis. Only by accepting the paradoxical confluence of forces that came together to create you do you become a hero.

TMNT says: don’t try to re-create yourself. Just be yourself. Your identity is bound to evolve no matter what. Unlike their enemies The Shredder and Baxter Stockman, the Turtles and Splinter use their unique gifts to work for a just society, not simply one in which they wield the hegemonic power. The Turtles are marginalized, yet they still find the strength to do what’s right. They didn’t choose to be the way they are, but they accept their hybrid identity and make the best of it. At its core, that is the quintessential substance of Turtle Power.

[Have the Ninja Turtles been co-opted by the existing social order to defend its power structures? Or are they reforming it from within? And is Krang a symbol of colonial hegemony? Sound off in the comments! – Ed.] 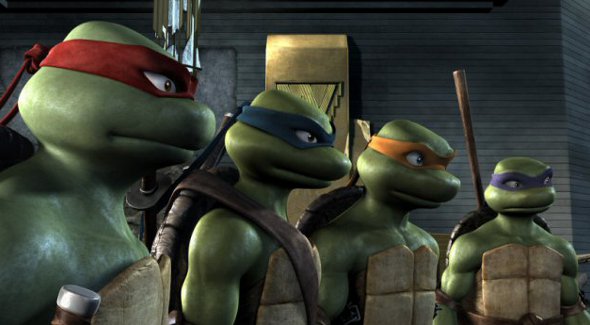 Richard Rosenbaum is Associate Fiction Editor for Incongruous Quarterly and Broken Pencil Magazine, as well as their recently released anthology “Can’tLit: Fearless Fiction from Broken Pencil Magazine.” He just completed his Master’s Degree in Communication and Culture at Ryerson University, and thinks about Ninja Turtles more than is probably healthy.