Did anybody else see what just happened there? Kanye actually said, “Fuck SNL and the whole cast.” He just hid it real well.

For your convenience, the new second verse is transcribed below:

The brown hero live from Ground Zero
Machine gun flow made a ghetto Ross Perot
And this is disestablishmentarianism
With my night goggles on, yeah, military vision
And it’s still a very Christian way to think about living
When you praying for freedom cause your mind been in prison
Cause they tryin to control every single life decision
You ain’t effin’ the system then why the eff is you living?
Look dog, you can cop whatever suits you on
Three piece, cuff links and the accoutrements
They been feeding us [shit] without the nutrients
So I’m back with another hit to let the truth be known
And your boy still fresh with the Gucci on
Them Italians sure know how to make what the moulies want
And they really can’t take what dude be on
But I be on the same thing til you prove me wrong

The second verse of “Power” started off as a personal reflection on the travails of becoming a world-famous MC. When you become successful, you make a lot of enemies. You also goad a lot of people into making fun of you, like SNL. So Kanye fired a shot off against SNL for having dissed him in the past. SNL responded by inviting him to perform. If we view this as a power play between two forces in popular culture – Kanye vs. Lorne Michaels – that was a cunning riposte on SNL’s part. By having him on their show, SNL could co-opt his language. They would own it, at least in part, by having given him a venue from which to rap.

Kanye’s response was to change up that second verse into something completely different. As a power play, that’s a frankly astonishing response. It’d be equivalent to Campbell’s asking Andy Warhol to exhibit Campbell’s Soup Cans at their headquarters in Camden, New Jersey, and Warhol showing up with a robot made out of a microwave oven. SNL thought they were showing how cool they were with being told to kiss Kanye’s ass(hole). Kanye played it off like he had something else entirely to say.

(Who says Kanye and SNL are at odds? Kanye said it. Who says SNL is either a gatekeeper or a stepping stone on the path to power? Kanye said it, by including them in his bangin’ new song called “Power.” You might not agree with either point – and that’s fine; I’m playing in a more theoretical realm than usual – but that’s the scenario Kanye pitched us)

So what did he have to say?

First off, the very act of changing up that verse entirely calls attention to it. Anyone who knew the song was on the edge of their seat, wondering what would happen. When listeners realized that the entire verse was being changed up, it became that much more memorable.

Second, Kanye compares himself to Ross Perot. Those of us who remember Ross Perot primarily from his SNL parodies may think of the billionaire as a giant joke. But Ross Perot was also one of the most successful third-party Presidential candidates of all time. He amassed over 18% of the popular vote in 1992, getting just shy of 10 times the votes that Ralph Nader did in 2000. Perot was a wealthy (and eccentric) outsider who sought to break up existing power structures in Washington, D.C. He challenged the establishment. You might say he practiced “disestablishmentarianism.” 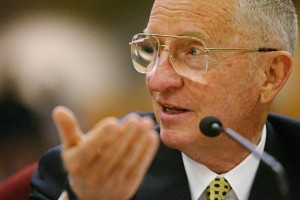 Third, Kanye describes the Italian fashion popular among gangsta rappers: “Gucci” “three piece” suits with “cuff links and the accoutrements.” He’s calling out rappers specifically: “moulies” is an offensive slang term for black people. When Kanye observes that “them Italians sure know how to make what the moulies want,” he’s being ironic again.

In this new verse, Kanye is delivering a message to everyone else who wants to climb the ladder – everyone else who wants power. Rap music, now several generations removed from Grandmaster Flash, has created an abundance of imagery for ambitious performers. If you want to show that you’ve arrived on the rap scene, you dress like an Italian gangster. And if you want to climb the music charts, the best way to tell if you’ve arrived is if you get to perform on SNL.

But are you really breaking new ground? Or are you just doing what they expect you to do?

Kanye has never been a man content with existing dialogues about race and power in America. This is the man who interrupted Mike Myers on national TV to assert that “George Bush doesn’t care about black people” in the wake of the levees breaking in New Orleans. This is a man who quotes Spike Lee’s Malcolm X as the chorus to a hit single. He clearly doesn’t think the existing means of redress can handle racial injustices.

He’s exhorting black people to stand up, take charge, and seek power through any means necessary. “Until then,” he yells, “fuck that, the world’s ours!”

And yet, at the same time, Kanye is also warning people who might follow in his footsteps. Once you reach this point, he’s saying, you’ll be tempted to fall into the old means of doing things. You might want to run for office, or record an album where you talk about smacking bitches. Be careful with what they offer you. And take stock of your own heart as well, since you’ll be assaulted from all angles.

Performing on Saturday Night Live is just what an ambitious young performer should want. But Kanye clearly has beef with SNL. So what is he trying to say here?

Kanye wants the young black people inspired by his video to reconsider the imagery that pop culture presents them. Don’t let the Italian suits put your “minds in prison.” Follow Kanye through the darkness with his “night goggles.” Don’t think that working within the system will get you what you want: “if you ain’t effin’ the system, then why the eff is you living?”

Kanye’s saying that rappers, and rap music, need more political and social consciousness. And he’s not alone in saying that.

Of course, one can question how good Kanye has been at staying outside the system, with his multiple #1 albums, his millions of dollars in suits, and his flights around the world. But Kanye himself would recognize this irony. He knows that, to get the platform he needs to preach his gospel of change, he needs to sell out. He can’t spread a message of disestablishmentarianism without getting on a soapbox from the Establishment – Saturday Night Live, the most watched sketch show in America. That’s a paradox he acknowledges.

But he still enjoys it. At the end of the day? God damn it, he’s killing that shit. 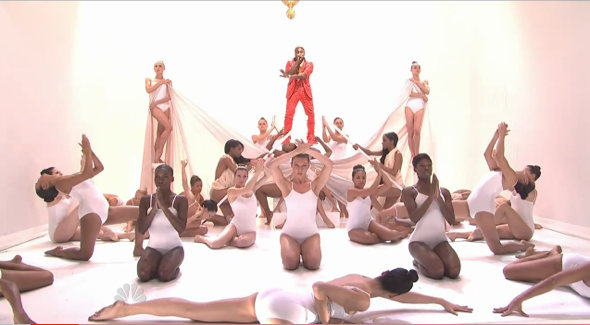