In The Selfish Gene, Richard Dawkins introduces the concept of memes as an analogue to genes. Memes explain cultural complexity using evolutionary principles: replication, variation and differential fitness. The developmental timescales and environments differ between genes and memes, but both generate complex functions by replicating information and storing variations between the copies making the information more likely to replicate again. In a Modern Warfare 2 multi-player Deathmatch, memes for getting kills evolve against environments of maps, weapon selections, time limits, score limits and other peoples’ memes for getting kills. One of MW2’s features, however, fundamentally changes the multi-player dynamic by isolating and replicating successful ‘kill-memes’: the KillCam.

Though Daniel Dennet and Susan Blackmore have done much to popularize memetics (see Darwin’s Dangerous Idea, by Dennett, and Blackmore’s TED talk, memes are still controversial and have yet to develop as a science. Briefly: memes are ideas that evolve through communication. Examples of memes are wheels, the Haiku format, fountain pens, LOLcats, Algebra, candy apples, wearing clothes, French, this article, slow-motion gun fights and “cooking” grenades.

If a scientist hears, or reads about, a good idea, he passes it on to his colleagues and students. He mentions it in his articles and his lectures. If the idea catches on, it can be said to propogate itself, spreading from brain to brain. – Richard Dawkins

Memes replicate when communicated to other minds and their phenotypic expressions are thoughts, feelings, and behaviors. Since phenotypic effects are the basis of selection in a given environment, any variation introduced and re-transmitted by an individual may increase the meme’s likelyhood of being copied, or likelyhood of reproducing, among other memories: it may evolve. It’s important to remember that both ‘genes’ and ‘memes’ are a shorthand for whatever information complex is necessary to develop an effect. Modern Warfare 2 then is a meme comprised of, among many others, the memes for Gun, Building, Clothes, Score, War and Team.

If you feel uneasy about accepting the idea of memes without some discrete information carrier like DNA, remember:

You can finesse your ignorance of the gory mechanical details of how the information got from A to B, at least temporarily, and just concentrate on the implications of the fact that some information did get there – and some other information didn’t. – Daniel Dennett

The memes evolving in a MW2 Deathmatch are, again, ideas that get kills. When someone gets a kill, their strategy may be remembered and reproduced, with variations, by those who copied it to memory. Every individual has their own memes for getting kills and, when those memes compete, their differential payoffs are analogous to an organism’s fitness. The memes regularly producing kills tend to get copied more often than memes that do not, and so ‘good’ memes increase their frequencies in a player population.

All the ways to get kills in MW2 can be considered the MW2 ‘meme-pool’. For example, on a given level there may be spots A-Z where automatic turrets can be placed. If placing a turret at spot B regularly gets more kills than spot Y, then the meme for placing turrets at B will, all things being equal, successfully express more often and tend to be imitated (reproduced) more often; increasing B’s frequency in the meme-pool relative to Y’s.

In videogames, the communicable information between players is largely limited to in-game representations putting boundaries on the kinds of ideas capable of expression. Unobservable memes say, a cheat-code for instant head-shots, cannot get reproduced by imitation even though it has phenotypic effects in the game: the memes are un-inheritable. Other memes are hard to perform or are highly contingent on a given environment so, while being imitable, their reproduced effects often fail and tend not to get selected for imitation: the memes are reproductively unfit.

Since memes are imitable, their reproductive likelihood is dependent not only on their effects and the player reproducing them, but also their method of transmission. Traditionally, players tried out their own strategies and learned what they could by occasionally observing others. That all changed with the KillCam.

Eyes don’t have to happen, but they are a ‘good idea’ in an environment like Earth’s and many organisms have converged on the ‘design’ independently. Convergent designs in MW2 are firing your weapon, using scopes and jumping over obstacles. These strategies seem obvious because they are the regularly successful adaptations to the given environment, easily discoverable given the conditions, and hardly need transmission to become widespread in the meme-pool.

The interesting memes, however, are independent but rare discoveries that would likely disappear if not inherited from some originator. In MW2, the KillCam allows just that memetic inheritability by isolating and reproducing successful kill-memes for other players to copy.

Each of the KillCam’s replays are an attempt at ‘sexing’ information to another player.

Never mind that inheriting a meme requires a player’s death in-game. Each player’s respawn is the meme’s next chance at reproduction. We can illustrate memetic reproduction with something like a ‘Hopeful Launch’ meme.

Two teams begin on opposite sides of a map. One player on team A launches a grenade toward a spot where team B is likely to cross and hopes for a kill. Pre-Killcam, player B would die and become wary of the spot next Deathmatch. If on the other side, player B may try a Hopeful Launch themself. Post-KillCam, the information for performing a successful Hopeful Launch is transmitted from player A to player B, and without having to figure it out themself, player B can reiterate the meme with better than chance odds of success. When players A and B both have the meme, each are then capable of reintroducing it to others who may go on to replicate it in turn, which increases the meme’s frequency among players.

Higher frequencies mean more players varying and reproducing a meme which has two primary effects. First, each time a meme is copied by other players its potential reproductive rate increases as each player is capable of reproducing the meme independently. The second is that when more players are capable of varying and reproducing a meme, the meme has a better chance of ‘finding’ some variation that makes it more reproduceable. If some parent meme, like the Hopeful Launch, is copied by two players then we have two daughter memes and either player has the chance of introducing variations into their separate lineages. A variation that makes one copy out reproduce the other will tend to spread more quickly throughout the meme-pool since it is both more copyable and more likely to hit another beneficial variation. Of course players are just as likely to come across a bad variation but, since the KillCam only reproduces successful memes, good variations alone will get transmitted.

When variations cease having significant effects on a meme’s reproductive likelihood then the meme reaches high-fidelity transmission. High-fidelity memes are ‘cleaner’ copies and produce the most regular probabilities of effect within a given environmental condition, which means that a player adopting a high-fidelity meme is more likely to have success than if they adopt some rival meme for the same effect.

YouTube videos like this transmit high-fidelity memes to other players trimmed of useless variations by the trials and errors of the poster.

Complimentary weapon and perk pairings, a map’s regular conflict zones, well-known defensive positions (in Objective-based games), and the best locations for mines, turrets, snipers, and campers are all evolved in MW2 matches. Though positive discoveries spread more quickly through the KillCam, so too do inconvenient ones. Snipers and campers who rely on secrecy for their kills are given up, both when their prized positions are revealed and when their soon-to-respawn victims learn exactly where to go for revenge. Players also spread strategies counter to their own interests, like with the ‘Scatter’ meme.

If you control a Predator missile, the convergent (obvious) strategy is to direct the missile toward a clump of enemies. The counter-strategy, of course, is to scatter away from a targeted group. Because the Scatter meme is a counter-strategy, its frequency will be initially smaller than the Aim at Clumps strategy and any player using both will gain more payoffs than a player using either.

But, a player using both unwittingly shares the Scatter strategy through the KillCam with others who died because they didn’t scatter, which will eventually dampen the same player’s Aim at Clumps exploit as more and more players learn to skirt the missile in future matches, lessening its kill-payoff. We might even predict that a KillCam disabling perk would be widely used by snipers and campers leaving their windows of exploitation open longer by limiting the spread of ideas. There are other sensible predictions too but we may not need ‘memes’ for them.

If memes are overly reductionist, or simply metaphorical, then we should be wary of their explanatory limitations and clear about where they are. To dismiss memes outright for the ideal of selves figuring out what to do, choosing good ideas and learning from others may be even better but, we might get left in circularity if we ask, ‘what exactly is choosing?’ It may only be coincidence that players copying good moves and trying out new ones by trial and error is also the fundamental process of evolution.

Nathaniel Hanks studied literature in University but now focuses on evolutionary theory and language. Thanks to Robert Benjamin for the title image! 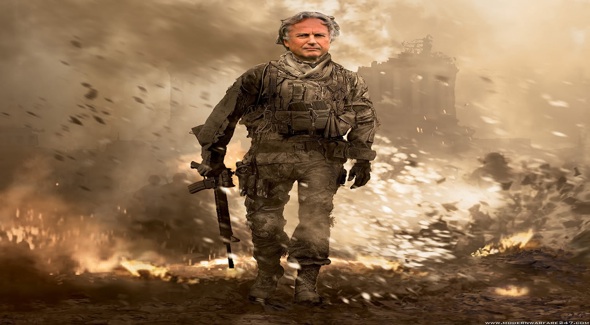 (Have we discovered a new means of reproducing information? Do memetics or evolutionary theory have anything else to tell us about multiplayer FPS? Sound off in the comments! – Ed.)

9 Comments on “The Selfish Cam: Memetic Reproduction in Call of Duty: Modern Warfare 2”