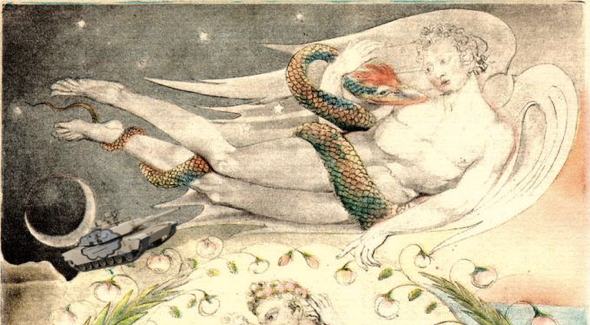 Imagine our shock when we read this:

Alex Proyas is finding “Paradise Lost” for Legendary Pictures, signing to direct an adaptation of the epic 17th-century English poem by John Milton. … The project tells the story of the epic war in heaven between archangels Michael and Lucifer, and will be crafted as an action vehicle that will include aerial warfare, possibly shot in 3D.

Proyas’ credits include sci-fi disaster thriller “Knowing,” “I, Robot” and “The Crow.”

Read on for our reactions and an awesome photoshop contest.

As you can imagine, this email generated a ton of traffic on our internal OTI writers mailing list. A representative sampling:

Belinkie: Imagine Pete’s face as he reads that article. I’m imagining one of those Loony Toons effects where his eyes pop out of his head, head the computer screen, and then his eyes grow little eyes that also pop out.

Mlawski: “Proyas’ credits include sci-fi disaster thriller ‘Knowing,’ ‘I, Robot’ and ‘The Crow.'” So you know this shit’s gonna be good.

Perich: “Possibly shot in 3D”?  Possibly?  Didn’t you get the memo, Proyas?

Fenzel: Since this is by the guy who did “I. Robot,” I expect a movie about two WWI flying aces battling each other in heaven, followed by a contest at the Pennsylvania State Fair where a man and woman compete to eat as many apples as possible in five minutes.

Perich: Paul Bettany needs to be in it; he’s in everything vaguely blasphemous.

Belinkie: See, I thought about Gerard Butler as Satan.

But isn’t Satan supposed to be ridiculously gorgeous? He’s the Morning Star, right? Not that they will necessarily stick to the source text, but my money is still on a pretty boy who can ALSO do action. In other words, Jude Law if they are going highbrow, Channing Tatum if we’re really lucky.

Perich: What about taglines? How about:

(smash-cut of a crawling pit of CGI demons)

Lee: I would totally Photoshop the hell out of this movie poster. Heck, we should make it a photoshop/tagline contest for our readers.

Wrather: Great! My contribution will be copy/pasting everyone else’s clever ideas into a new post (being an editor is awesome!) and exhorting our readers to submit their own Photoshopped movie posters with stars and a tagline of their choice.

What do you think, Overthinkers? Do you have what it takes to photoshop the hell (get it?) out of a movie poster for an action spectacular based on the first 15% of Milton’s Paradise Lost, the unsurpassed and unsurpassable greatest work of literature in any language ever? Extra points for stereoscopic effects. Link ’em up on the comments, and we’ll vote on our favorites.