John Perich is on special overthinking assignment this week, so I have the pleasure of returning to my former post as the opener of threads. And we have more to cover than usual, so let’s get right to it. 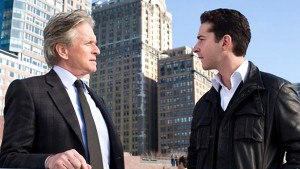 Michael Douglas (get well soon!) reprises his role as Gordon Gekko in Wall Street: Money Never Sleeps, Oliver Stone’s sequel to his 1987 financial thriller which gave us the commonly and inaccurately quoted mantra: “Greed is good.” Despite some interesting competition, including Ryan Reynolds in Buried and Joaquin Phoenix’s “performance” as terrible hop hop artist JP in Casey Affleck’s mockumentary I’m Still Here (Letterman may sue), Douglas and sidekick Shia Leboeuf, taking over for Charlie Sheen as an idealistic naif, look poised to win the weekend. I’m not saying that I give a crap about the box office—I actually think that our collective fixation on the theatrical earnings horse-race distracts us from what is actually worthwhile about movies, especially on a website like Overthinking It. I’m just saying that The Beef may bring home the bacon.

For your consideration, then, some questions:

It’s also worth pointing out that despite not opening for a week, The Social Network, a fictionalized account of the founding of Facebook (based on the book The Accidental Billionaires), from the dream team of Aaron Sorkin (“The West Wing”) and David Fincher (Se7en, Fight Club), is kicking ass with reviewers, scoring a perfect 100 on both Rotten Tomatoes and Metacritic as of this writing. Upon release, expect the full “Dark Knight” treatment from Overthinking It, which is to say wall-to-wall coverage.

Actually, while we’re on the subject of stupid things like box office numbers, who was the idiot that thought that aggregating the opinions of film reviewers and reducing them into an average score could tell you anything remotely interesting about a movie? All opinions are not created equal, and the interesting opinions can’t be reduced to a score! Apparently it gets traffic, though. So, for this week, another question: How can we cynically capitalize on humankind’s obsession with ranking and status by creating some kind of Overthinking It Score? What should we rank and how?

Turning, now, to our continuing coverage of children’s television, a segment featuring Katie Perry may be cut from Sesame Street, which has not prevented everybody on the Internet from seeing it. I’ll let the fine people at the Associated Press explain:

And, in case you’ve been living under a rock, the new American Idol judges have been officially announced. 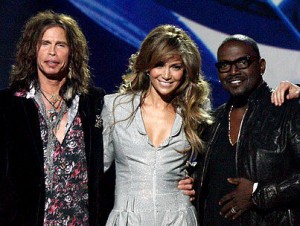 We were young once, and credible.

Steven Tyler and Jennifer Lopez will join Randy “A Little Pitchy, Dawg” Jackson, hoping to revitalize FOX’s once-and-future cash cow. Needless to say I don’t watch the show, since I find the idea that singing in the shower is good preparation for international superstardom offensive. So let me leave you with this final question.

In this age of “user generated content” and instantly-accessible pools of knowledge a mile wide and an inch deep, is there any role left for expertise in guiding our thoughts and actions?

Also, who replaced my coffee with Folgers Crystals and made me so damn cranky?

Get off my lawn, you crazy kids, and get to overthinking. This is your… Open Thread!