[In honor of the return of Glee later this month, enjoy this guest post from OTI stalwart Gab.] 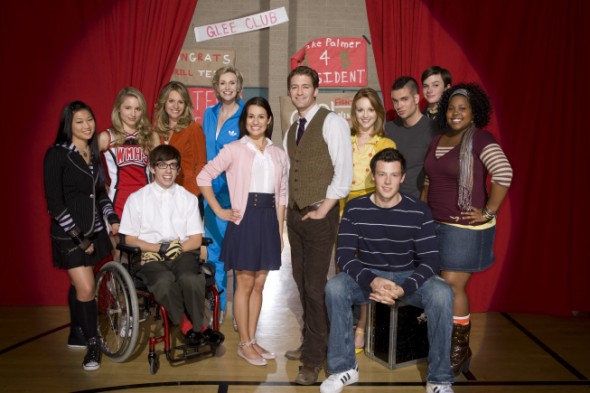 It is true, that God is the Soveraign of all Soveraigns; and therefore, when he speaks to any Subject, he ought to be obeyed, whatsoever any earthly Potentate command to the contrary.

“Women are passive-aggressive” is a longstanding commonplace about gendered aspects of social and power structures. And always implicit in it is the corollary that men are the opposite. If Alice pisses Becca off, Becca will make a comment about Alice’s shoes being out of style or sleep with her boyfriend or something; if Adam pisses Billy off, Billy will punch Adam in the face.

At first glance, this seems to be what is going on at William McKinley High in Glee, the hit teen soap which begins its second season later this month, in relation to the social hierarchy of the students. The football team, McKinley’s male elite, throws slushies, dumps people in trash cans, and basically stomps around campus in a hyper-masculine display of power and intimidation. Meanwhile, the Cheerios, the female elite, gossip about each other, sleep with different guys (and, we learn, with one another) for various purposes, and form alliances with each other to bring enemies down or to secure more power.

How do students become elite? For the football players, the answer is simple. A boy goes onto the football field and demonstrates his toughness and masculinity to Coach Tanaka, and if Tanaka is impressed enough, the boy gets on the team.

By analogy to a feudal society (an analogy that doesn’t seem like too much of a stretch for American high school), Tanaka is kind of like the king and the football players are like his knights. King Tanaka has his favorites, in some ways, but roles in the court (positions on the team) are based in a straight-forward way on the talent each player demonstrates—mostly brute force. Finn, Tanaka’s appointed Prince, isn’t quarterback because he’s smart, but because he can throw a pigskin.

Because the claim to elite power is based on qualities that are gendered masculine—strength and the potential for violence—threats to masculinity are threats to power and vice versa, and these threats must be overcome with force. This is why Finn being on the Glee club is a threat to the power structure of the football team—singing and dancing are deemed insufficiently masculine—and this is why he is punished with the sort of violence normally visited on a lower class of student.

By contrast, consider the Cheerios, their queen being Coach Sylvester. There are some surface similarities in the selection process for membership in the elite, though with the expected transposition of soft power—cajoling and politics—for violence and brute force. But the Cheerios have much, much more going on under the surface.

Finn’s membership in the Glee club is taken as a defection (and is the occasion of a confrontation between Coach Tanaka and Mr. Shue.) But Sue can send girls to do the same work that is intolerable for the boys, bribing three Cheerios to join New Directions as spies.

Not only is the social status of the girls somehow more secure than the boys—it is more difficult to threaten through alliance with the gleeks—and for that reason the Cheerios seem to have more latitude in wielding power, in the form of manipulation, than the boys have.

Quinn, Brittany, and Santana all appear to still do just fine once they join the glee club: Quinn still remains the Queen of the campus. And when Sue makes Mercedes the star of the Cheerios, she becomes the coolest girl in school (or something very close), yet she’s still eating lunch with New Directions members.

Her position is secure enough that when Puck needs a boost to his social status, he specifically attempts to date Mercedes. For the boys, all it takes is a bad haircut to get thrown in a dumpster, but Mercedes can “slum it,” if you will, and still be idolized by others. The transfer of power goes one way: Puck draws status from Mercedes, but her status isn’t thereby diminished. Indeed, all the Cheerios appear to have much more leeway in the boys they choose. For example, even though Finn’s social status had clearly taken a hit, Santana and Brittany plot to seduce him.

(It’s believed that the peasantry in any monarchy or empire has more opportunity to marry for love. Artie and Tina? Yup.)

This pattern of examples encodes a radical reversal of gender norms. Stereotypically, the star male athlete of a high school is the King of the student body, his closest friends on the team his advisors or royal council, and the rest of the team and the entirety of the cheerleading squad his royal court.

But at McKinley, the Cheerleaders are running the show. There’s a Quinn—excuse me, a queen (the name “Quinn,” for what it’s worth, is derived from the Irish Gaelic word Coinn, which means “chief”)—and a court of lesser cheerleaders, and they bestow power on the boys rather than the other way around

In metaphorical terms, it might fit better to call the football players a military rather than a monarchical organization, not only because they are specialists in violence but because of the emphasis on obedience. In other words, for the boys, the source of their power constrains their agency; not so for the girls.

From where does the Cheerio’s power flower? Ostensibly, Principal Figgins is in charge of the school, but in practice it’s pretty clear that the real power at McKinley is Sue Silvester. The feudal analogy leads us to assume we have a bunch of sovereign nations, ones with different amounts of authority and autonomy within the overarching structure of the global society entrenched within the high school. 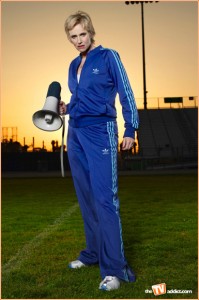 But allow me to suggest a different interpretation. Sue isn’t simply another actor on the political stage; she is the source from which political power and the authority to wield it flow. What Glee portrays is a matriarchal monarchy with Sue as not the sovereign, but as the god bestowing the crown on the woman she deems most worthy.

The head of the Cheerios is made sovereign in the manner of medieval monarchies: through Divine Right*. Sue giveth, and Sue taketh away: Quinn is ousted by Sue because of her pregnancy (ironically, the capacity to bear children is what gets her ousted from the female elite); Mercedes, a girl that had just the day before been a loser, is suddenly accepted as the coolest girl around and head Cheerio when Sue declares it so, and the rest of the squad doesn’t question question her sudden rise to power. Sue’s divine reign extends to everyone on the campus, to student, teacher, and administrator alike.

What does this make Coach Tanaka and Principal Figgins, then? Well, perhaps high-ranked lords, or minor kings, but they aren’t as important to Sue as the Queen she selects, nor are they as influential on the students. The real power struggles are between the kids in and out of the uniforms of the elite, for what happens to and between or among them ultimately drives any conflicts Sue has with Figgins, Tanaka, or any other adult at the school. It’s the girls in the Cheerio uniforms calling the shots Sue herself doesn’t call, and everyone knows they are acting in Her name when they give an order. The other students, football players or not, are too terrified of Sue to question the Cheerios. So, for however crazy-evil Sue Sylvester may come across, at least she has female empowerment in mind—she doesn’t coach a boys’ team, after all.

*The concept of a political leader selected by the supreme deity of the land is not exclusive to Christianity, by the way. Gods and goddesses have been picking rulers all over the world since we first started speaking to each other in more than grunts.

Gabrielle Arrowood has a B.A. in politics with a minor in history. She has dabbled in group therapy and public education for children with special needs, as well as daycare and retail. She now gets paid to read geeky stuff in a graduate program for political science.

20 Comments on “Sue Giveth, and Sue Taketh Away: Glee and Matriarchy”