I am a busy man. My clothes often go directly from the laundry bag of clean laundry, to my body, to the laundry bag of dirty laundry, without seeing the inside of a drawer. My dishes go from the drying rack, to the dinner table, to the sink. And by the dinner table, I mean the couch, because I eat watching TV. I tell you all this not to brag about what a Judd Apatowesque schlub I am. My point is, I clearly don’t have time to watch an opening credits sequence. That’s why God created the fast forward button on my DVR.

And yet, every time I watch Hung, I can’t help but sit through the opening credits in respectful silence. I find it strangely compelling.

At first glance, it’s pretty straightforward. Thomas Jane’s character, Ray Drecker, walks from downtown Detroit to his home in the suburbs, shedding his clothing, until he finally plunges naked into the lake.

But it’s the final shot that gets me every time:

After the song ends and the screen cuts to black, the image suddenly fades up again. It’s Ray floating in the water. He turns his head towards us and shatters the fourth wall. His expression, is, well, enigmatic. Some days he seems hostile, as if he can see me watching him. Some days he seems embarrassed, as if struck by the silliness of his striptease. Some days he just seems confused. Whatever he’s thinking, the shot makes my skin crawl. So let’s mull over this 60 seconds of footage, and see if we can unpack the meaning of Ray’s stare.

I wonder if this opening is meant to be a sly parody of the credit sequence for HBO’s biggest hit, The Sopranos. In that one, Tony Soprano drives from the New York City to his Jersey suburb. Roy Drecker also travels from an urban center to the ‘burbs. Both pass by scenes of poverty and blight. However, Tony views them through the windows of his luxury car, enjoying his stogie. Ray walks the whole way, shoeless for a good portion of it. And of course, Tony ends his journey at his gorgeous house, whereas Ray ends up at a burnt-out husk (the fire was in the pilot, and Ray is still a long way from rebuilding).

I think it may be crucial that neither trip reflects the protagonist’s actual commute. Tony may travel to New York a lot, but doesn’t work there. And Ray works in the suburbs, not downtown Detroit. The fact that the creators of these shows want us to see their protagonists leaving these places suggests a symbolic importance to the geography. Tony Soprano, David Chase is telling us, is not merely a resident of New Jersey, he is NOT a New Yorker. The title sequence places him in opposition to New York, a relationship that only comes into full bloom in the final season. Similarly, we see Ray travel from the very heart of Detroit to his suburban house, where he jumps into the lake. There’s a huge gulf between where he starts and where he ends, and that says something.

Here’s another important point: Ray is not merely going home. Not exactly. He’s going to the LAKE. The lake is clearly his Fortress of Solitude. I suppose I would have to turn in my Overthinking It card if I didn’t suggest the idea of baptism. Here’s a man with his life in shambles, stripping himself naked and leaping into the water. Does he emerge cleansed and restored? Maybe the last glance at the camera is a look of inner peace? Or is it bewilderment that the inner peace didn’t come? Or maybe it’s just a warning that we’re getting too close: “Whoa, back off camera. I’m in my special happy place.”

Let’s tackle it from another angle. Ray’s looking sharp in his suit, isn’t he? But Ray isn’t the kind of person who enjoys wearing a suit. He’s an ex-jock and a high school baseball coach. On the show, he wears suits for his clients, to present himself as a “luxury brand.” So the suit is actually his uniform. 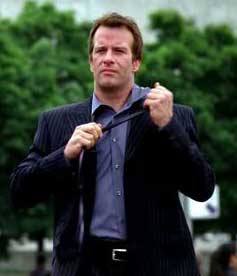 When he begins to take the suit off, it’s natural to assume Ray is doing something sexual. Certainly, the first shot of him wrenching off his tie in slow motion is a little steamy. Note how nearly all the people Ray passes on the street are women, and many of them look him over. Symbolically, he’s seducing the entire female population of Detroit.

Or is he? As it turns out, the less clothes he wears, the less sexy he becomes. Ray without a tie is hot. Ray without a shirt makes him seem like a crazy person. And if Ray’s disrobing is meant to be seductive, how come he’s ignoring all the woman? In fact, it turns out he’s not undressing for a woman at all. He’s undressing to take a swim. He’s taking off his uniform and leaving it behind. He’s not stripping… he’s QUITTING. Even though this is a show about a man who becomes a prostitute, the opening credits reveal his indifference towards that path. 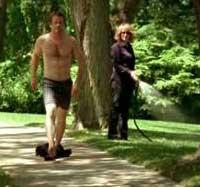 The phallic symbols in this sequence are as follows: large cargo ship, big black fist statue, hot dogs, arguably the building in the background of the movie theater shot, the giant ice cream cone. But after all those come two images of women wielding phallic symbols. There’s the woman pumping gas. That’s followed by the money shot, pun intended: a woman squirts water on her lawn, from a hose held at waist level.

Those shots carry the suggestion of gender reversal – the women are wielding the sexual power. And in this show, they definitely do. Ray is a MALE prostitute, hired by rich women to do whatever they say. It’s a strange position that makes him simultaneously a total stud, and totally emasculated. That’s why the theme song, “I’ll Be Your Man,” is absolutely perfect. He belongs to the women that hire him. Maybe that’s what is behind Ray’s final, conflicted glance. He’s selling his body, and that can take a psychological toll. A part of him thinks it should be a dream job. Another part just wants to throw the suit in the garbage and hide from all the rich women.

But I think if you want to understand the final shot, you need to get at the core meaning of the show. Hung is really about money, not sex. In a recent review, the New York Times pointed out:

Notionally a sex farce, “Hung” is substantively a continuing commentary on the humiliations of middle-class life during a downturn in which the spending of the still well-to-do strikes many as a kind of aggravated assault.

Ray lives in a burnt-out house he can’t afford to fix. His school is chronically underfunded, and his job is always in danger. His wife left him to marry a rich dermatologist. But the dermatologist has also fallen upon hard times. Ray’s pimp, Tania, is a starving poet who begs her boss for more hours. Almost every episode is about financial desperation of one kind or another. Where better to set it than Detroit, the financial desperation capitol of America. 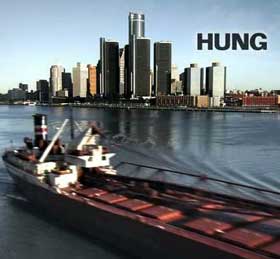 But in the opening sequence, Detroit doesn’t look like an urban hellhole at all. It actually looks kind of nice. Cool-looking fountain, quirky little hot dog stand and quirky little ice cream store… this is a Norman Rockwell version of Detroit. It’s light years away from 8 Mile. We do get one shot of an abandoned building, and one shot of a “For Sale” sign (“REDUCED,” it promises hopefully). But let’s put it this way: Detroit here looks way nicer than the New Jersey Tony Soprano passes through. 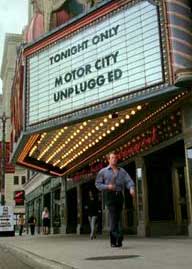 I’d say this sequence is looking at the city with rose-colored glasses, “Detroit is a really cool place!” the sequence says. “It’s just going through a rough patch.” Want proof? Take a look at the theater marquee Ray passes. “MOTOR CITY UNPLUGGED,” it says. That certainly sounds grim. But it also says “TONIGHT ONLY.” This recession too, shall pass. If you think the marquee is just a coincidence, go ahead and Google “motor city unplugged.” It doesn’t exist, except on an amazing MySpace page. My point is that Detroit is portrayed lovingly, warts and all. It’s a great city, down on its luck.

All this is well and good, but it still doesn’t explain the cryptic final shot. Then, I thought about Election

Hung was created by the husband-and-wife writing team of Colette Burson and Dmitry Lipkin. But the pilot episode was directed by Alexander Payne, the man behind Election, About Schmidt, and Sideways. Payne had not directed anything for five years when he agreed to do the Hung pilot. And to my knowledge, he’d never directed anything he hadn’t written before. Clearly, Alexander Payne really likes Hung, and with good reason. Like Election, Hung features first person narration. The protagonist is teacher who absolutely loves his job. And here’s the key: both Election and Hung are not merely comedies, they are social satire. In other words, Election isn’t just about a high school election, it’s about American elections in general. And Hung isn’t just about a group of suburbanites struggling to get by; it’s about how America is struggling to get by.

You see what I’m getting at? Ray is a stand-in for us. He’s America. I’m not saying every plotline on the show is an elaborate metaphor. I won’t even speculate on what the prostitution could mean. But I do think the fire is meant to be the recession. The fact that the house still isn’t rebuilt two seasons later proves that the writers are paying attention to recent economic news.

That’s why right before every episode begins, Ray looks us right in the eye with his inscrutable stare. I know what it means now. It’s recognition. It’s the way you look at yourself in the mirror.

7 Comments on “The Opening Credits of Hung: An Appreciation”