While watching Christopher Nolan’s Inception, my mind wast mostly turned to jello from trying to make sense of the movie’s mechanics. Why exactly does the falling van cause weightlessness in the 2nd hotel level, but not the 3rd ice level? Why do they need the fancy dream machines when they’re already inside the dream? What is Christopher Nolan on, and where I can I get myself some of that?

The few solid chunks of brain matter I had remaining, however, asked a far simpler question:

Haven’t any of the characters in this movie seen Total Recall? Or The Matrix?

I don’t know about you, but if I were an elite dream-hacker who dealt constantly with the possibility that my current state of consciousness was a dream and not reality, I’d be constantly making references to these kinds of movies. Well, part of that’s due to the fact that I’m a pop culture reference kind of guy, but it’s also just how most people–not just Overthinkers–go through our lives and interact with friends: we talk about pop culture together, and we connect events in our lives with related works of pop culture.

Inception is devoid of any such references. For all we know, in the universe of Inception, there are no movies whatsoever, or if there are movies, then these characters have either never seen them or have seen them but never talk about them (on screen). What’s going on? Are they living in some sort of, say, dream world that’s divorced from reality? Well, probably (more on that later). But here’s the interesting thing: movies don’t seem to exist in this world, or at least the characters don’t show any awareness of them, but pop music clearly does, and the characters are aware of this. Hence the prominent use of the Edith Piaf song “Je ne regrette rien.”

So the characters in Inception exhibit zero knowledge of any movies, but they do know at least one pop song that the audience also knows. This got me thinking about how this works in other movies: sometimes, characters make reference to one or two movies; occasionally, they’ll make lots of references, and their actions will be highly influenced by movies they’ve seen.

Likewise, with music, a movie can have zero instances of pop music playing that the characters recognize, a few scattered instances, or multiple instances of characters jamming along to our pop music and being highly influenced by it.

Strangely, though, characters’ knowledge of movies and music function independently in movies. In some movies like Inception, characters can be aware of pop music, but not movies. (Correction: pop music does exist in Kick-Ass. See comments below.)

Hmm. This calls for a chart. Ladies and gentlemen, meet the Overthinking It Pop Culture Awareness in Movies Matrix, or as I like to say, OTIPCAIMM. 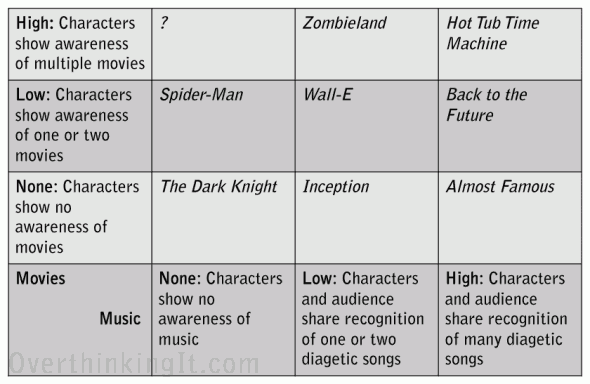 So what does this all mean?

First, it’s eminently clear that having characters show a high level of awareness of both movies and music is by no means indicative of the realism of movies. If that were the case, then Hot Tub Time Machine would be a gripping drama of coming to terms with adulthood and life choices instead of…well, this:

One thing, though, seems to be clear: it’s very difficult to make a serious (i.e., non-comedic) movie in which characters exhibit a high level of awareness of other movies. It calls attention to the audience that they are, in fact, watching a movie, which can help a comedy/action farce get away with a high degree of unrealism, but would obviously hurt a serious sci-fi movie that’s trying to sell you on the idea of, say, “red matter.”

Awareness of music has the opposite effect. A well-placed pop song–“As Time Goes By” in Casablanca, “Tiny Dancer” in Almost Famous–creates a bridge of common understanding between the characters in a movie and the audience without the plot baggage of the common understanding of movies.

Now, let’s come back to Inception. By this logic, the combination of lack of movie references plus one key music reference should be a good combination for selling the realism of the movie to the audience, right? Mostly.

Let’s imagine what Inception would have been like if the characters had shown awareness of movies like Total Recall and The Matrix through their dialogue and actions. Most likely, it would have come in the form of sarcastic remarks from Ellen Page, which would have had brought audiences back to her role in Juno. Chris Nolan, obviously aware of the meta-casting implications of Marion Cotillard (she played Edith Piaf in the biopic La Vie en Rose), clearly would not have wanted to make such a connection with Ellen Page.

Beyond this specific meta-casting issue, there’s the issue of “selling reality” to the audience. After all, Nolan isn’t exactly trying to sell “realism” to the audience in the way that a typical action/drama movie would. He actually wants the audience to question reality, but only on his terms. Making references to Total Recall and The Matrix, even if they were throw-away, would have taken the audience out of Nolan’s carefully constructed universe and its very specific rules. In this universe, there’s no room for Total Recall or Matrix rules to distract the viewer.

Arnold: unfortunately not likely to star in a Chris Nolan movie anytime soon

Plus, “Get your ass to Mars!” is not the kind of catchy one-liner that Christopher Nolan is apt to allow in his movies.

As for the music, well, it’s a little more complicated. As I mentioned before, the song “Je ne regrette rien” is the only work of pop culture that we’re made aware of in the world of Inception. The song functions as a recognizable pop song in a movie should: it highlights the poignancy of Cobb’s regrets and mental anguish through the poignancy of the song and the irony of the lyrics (“I regret nothing” vs “I regret, well, everything”). But we have this additional layer of reality-questioning that we must reconcile such an association with. If, by the end of the movie, we’re left questioning whether Cobb’s anguish was “real” or not, then we’re also left questioning the “reality” of the poignancy evoked through the song. But that doesn’t mean it was just a throw-away. At the very least, the presence of this song means that somewhere in this movie, there is in fact a grounded reality that at least has common roots with our own reality. Even if everything we saw in the movie was Cobb’s–or someone else’s–dream, we at least know that the dreamer lives in a universe where Edith Piaf and “Je ne regrette rien” also exist.

But all of this only applies to those in the audience who are actually familiar with this song. Although it’s a fairly famous and popular song throughout the world, it’s still a French song. Plenty of people who saw Inception (a major studio tentpole marketed to a broad American audience) probably don’t know the name Edith Piaf, nor are they consciously aware of the song “Je ne regrette rien.” Yet Nolan was probably counting on those people to have a faint outline or little fragments in their mind of Edith Piaf and her voice. They probably heard it in Saving Private Ryan or in a number of other pop culture works that reference France. Her voice is unique among unique voices to the point where anyone who’s heard it at least a few times would get at least a few hints of recognition from “Je ne regrette rien.”

The people in the audience who fall into this category don’t get the full effect of song recognition, but instead, they get little twinges of recall to something they think they might have heard before but aren’t completely sure. You might event say it’s activating a subconscious memory of the song. Or replicating the effect of trying to remember a dream.

How cool is that? Damn. Christopher Nolan is a genius.

Okay, maybe this reading is a bit of a stretch. Even if it is, I still think that Inception provides us with an interesting opportunity to Overthink the way movies choose to depict pop culture awareness in their characters. So many of our movies purport to exist in our “real world” yet have vastly different ways of reflecting the “real world’s” pop culture, if they choose to at all.

23 Comments on “Pop Culture Awareness of Characters in Movies, or, Why Nobody in “Inception” Has Seen “Total Recall””