How Silly Bandz Are Used

This empowers kids to not just ask for them from their parents — Silly Bandz are given as gifts and traded among friends, not so much in a drive to fill a collection, but as a signifier of social relationships. They’re similar to friendship bracelets, except not nearly so serious. They’re sort of like “facebook friendship” bracelets.

Thus, I get to the main limb upon which I intend to go out here — Silly Bandz are pieces in a real-world game that teaches the values of online social networking systems, and of the new rules of the currency of information.

A person who has Silly Bandz has a certain amount of information. They can make this information as public as they want — they can tell everybody what their Silly Bandz are in their relaxed states, they can carry them around unworn and show them to people; conversely, they could keep their Silly Bandz at home or always wear them on their wrists so people don’t know what they are.

But this information isn’t really private. If somebody really wanted to find out which Silly Bandz you had, the way Silly Bandz tend to be used and the way kids talk doesn’t make this especially hard. After all, most people carry theirs around a lot of the time (and there are some skeevy folks who do this, no doubt, who are rightfully exiled to the fringes of society). Plus, Silly Bandz are cheap and plentiful — this ubiquity is the best protection any one person with Silly Bandz has against anybody trying to find out what their Silly Bandz are in their relaxed states.

The owner of the Silly Bandz can give these bands to friends, showing vulnerability by sharing the non-public information of what the silly bands really are. And as the friend wears the Silly Bandz, keeping this information obscured, they are still aware of the signification going on because they shared a social relationship with a friend that gave them the necessary background (they saw the Dali painting before we went over all the clocks with schlocky GiMP filters).

The social context is affirming. It creates a new way of “proving” that our relationships to one another matter, and that fills a psychological need — one that is at the center of the current information economy, which is, as I wrote in the aforementioned series, increasingly looking to social capital as a primary value from which to build other assets.

So, I think there are a number of pleasures to Silly Bandz that make them a great fad, and a great fad for right now:

1. They’re interesting. People talk about how modern folks have no attention span; that’s not true. We just have no time or inclination to deal with things that bore us. Things that spark our imagination and thinking resonate and pull us in. Silly Bandz do this.

By the way, we all now have to watch the intro to Turbo Teen, whether it supports my point or not (and I think it does) because it is amazing:

3. They reaffirm that “meaning” can persist even when it appears to be absent. This urge is at the emotional bedrock of most religious and secular drives to achieve understanding of the universe — the things we can’t see with our eyes that we discover or learn are true by either faith or investigation, both of which have roles in the semantics of Silly Bandz.

4. They socialize the interpretation of an art object, which makes it more fun. This is why people have book clubs, or why you go to the movies in groups, or why people put together pop culture websites.

5. They allow for the exchange information as a currency in a social context. Which is one of the most important and relevant skills people are learning right now. People are smart enough to know that games that teach this skill are useful games.

6. They create semantic affirmation for personal relationships. Friendship bracelets are cool because they give meaning, albeit one not derived from text, to something we know is important but sometimes hard to identify. Silly Bandz do this as well – except they are easier to use for lots of people, which is cool, because it feels good to feel like we have lots of friends, which is why, in turn, so many people “friend” their acquaintances on social networking sites.

7. A lot of them are elephants. And elephants are awesome. 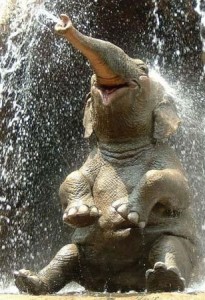 P.S. – It is important to note that Silly Bandz are completely different from sex bracelets, another current fad that is somewhat more bothersome. And they are both in turn different from plastic bracelets that raise money for cancer research. The only things these three fads have in common are that they are popular, they are successful, and they are made possible by plummeting costs in the manufacture and distribution of plastic bracelets.

5 Comments on “Silly Bandz and the Currency of Information”