The big news: Toy Story 3, the final chapter in Pixar’s laughter-packed, joy-soaked trilogy, debuts this weekend. Critics, wandering in the arid wasteland of Marmaduke and Furry Vengeance, wept with joy at a genuinely funny family film. Lo, there is balm in Gilead. Question: wooden toys, beat-up cars, cranky old men and rats – there’s nothing Pixar can’t make adorable. What unlikely protagonist will feature in their next film? 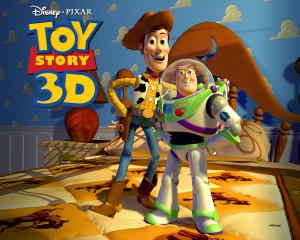 Also, the World Cup continues this week, splashing across the global marketplace. Focusing strictly on the pop culture aspects, we’ve had Lego recaps of the U.S. / U.K. match (a draw) and we’ve all become immersed in vuvuzelas. Sponsors are all over the game as well: last week featured the debut of Nike’s Write the Future ad, as well as the premiere of “Bud House” – a web-based reality TV show featuring residents from every World Cup country. Upon hearing that his beloved sport was being used to sell beer, Cristiano Ronaldo fell to the turf, clutching his shin and wincing. Question: what’s the most entertaining thing you’ve seen in the World Cup so far?

Would you see a Pixar movie about soccer-playing koalas? Or have we missed something else you want to overthink? Sound off in the comments, for this is your … Open Thread.