Now we get an interlude where two locals try and catch the shark. The first one is worried they’ll get caught, but his friend says, “Don’t worry, the Chief lives on the other side of the island.” It’s striking how Brody’s authority is flaunted, and it nearly results in another death. When his deputy chuckles over the story the next morning, Brody fumes, “That’s not funny, that’s not funny at all.” 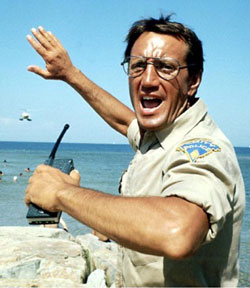 "If only Spielberg hadn't replaced my gun with a walkie-talkie!"

In the aftermath of the Kitner attack, seemingly every fisherman in New England descends to hunt the shark. However, these men are not motivated by any desire to protect, the way Brody is. They just want the $3,000 bounty. Brody desperately tries to uphold law and order at the teeming dock. However, his attempts to keep everyone safe are laughed off. “You gotta get somebody to help us,” he whines into the phone, “because we got more people down here than we can handle.”

But even though the fishermen completely ignore him, he’s overjoyed when they come back with a dead shark. “That’s swell! That’s swell!” he says. “Thanks a lot!” The celebration is cut short by Alex Kitner’s mother, who comes to the pier to give the Chief a good pwning for leaving the beaches open. Brody doesn’t defend himself. He doesn’t even apologize. He just stands there mutely and takes it. The shark may be dead (so they think) but Brody’s career in Amity might be too. In the next scene, he sits alone in his house, his face buried in his hands. But things can always get worse.

He and Hooper learn that the dead shark was not the killer shark, but they fail to convince the mayor. Brody has no choice but to try to protect the community the best he can, on the busiest weekend of the year. Armadas of boats patrol the waters, alert for any sign of the threatening shark. It is no coincidence that these boats are filled entirely by men, wielding phallic riffles. The entire operation is an extension of Brody, who has the ultimate responsibility for its success or failure. 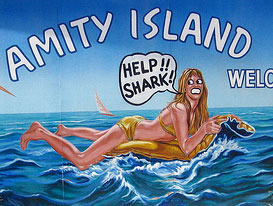 His failure is total. Not only does the shark strike despite his precautions, it very nearly claims his own son. Michael is dragged out of the water, unconscious with shock. Brody’s other son cries alone on the sand. It’s the swing set writ large; Brody can’t even protect his own family. In addition, the town is facing economic disaster, something Brody will also be held responsible for. (Keep in mind, this is the late 70s. Looking at this failure of traditional manhood in the context of Watergate and Vietnam is outside the scope of this article, but it’s certainly there.)

Incidentally, Professor Jane Caputi of the University of New Mexico sees the theme of castration in the symbolism of the shark itself. She points out that the destructive power of the ocean is often portrayed as feminine, and this Terrible Mother often takes the form of the vagina dentata, or “toothed vagina.” A common myth is that the teeth had to be knocked out by some male cultural hero to make it safe for penile penetration (patriarchy). She even goes on to identify Brody, Quint, and Hooper as the Holy Trinity, fighting and ultimately supplanting a pagan female deity. The feminist reading is clever (maybe a little too clever for me to buy it completely), but today I’m less interested in the shark than Brody’s reaction to it. 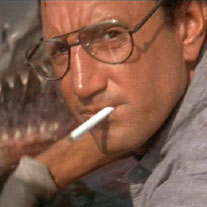 With his own manliness ripped to pieces, Brody practically begs Quint to take over. Certainly, the fisherman’s own manhood doesn’t seem in doubt. He offers the Chief a shot of homemade moonshine, declaring it, “Pretty good stuff.” Brody, of course, can’t handle it. By all logic, Brody should stay at home and let Quint do what he does best. But Brody insists on coming along. It’s worth taking a moment to consider how little sense this makes. Brody knows absolutely nothing about boats or fishing. In fact, he’s afraid of water. Quint doesn’t want him onboard. And of course, he’s the only law enforcement for Amity—it’s crazy for him to leave town indefinitely. But in a psychological sense, Brody isn’t the Chief anymore. He’s just a kid going out to sea. Call him Chief Ishmael.

The third act of the film is as unusual as it is brilliant. For the last 50 minutes (!), we do not see Brody’s wife. We don’t see his children. We don’t see Amity Island at all. Brody, Hooper, and Quint go to sea on the Orca, and the world of the movie narrows to the confines of that boat. Brody’s family and the authority that comes with his job disappear. (When Quint calls him “Chief,” it’s a form of mockery.) Surrounded by things he fears, unable to perform even the simplest task, Brody is reduced to a childlike state. 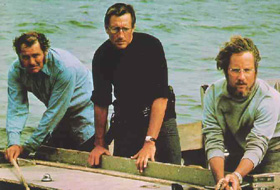 In one scene, Quint teaches Brody to tie a knot through a silly memory device. Brody mummers the condescending instructions Quint gave him over and over. When he ties the knot, he grins broadly and yells, “I got it!,” causing the shark on Quint’s line to run. Meanwhile, Hooper, who was deferential towards Brody on land, becomes superior on the boat. He spends his time impassively playing solitaire while Brody slaves to keep the chum line fresh. In place of the Chief’s family at the beginning of the movie, we are given a new nuclear family: Quint and Hooper as the bickering parents, and Brody as the son looking for their approval.

You Joseph Campbell fans out there know that in many folktales and cultures, a boy has to leave the community to engage in a dangerous hunting ritual, before he can return as a man. Think about teenaged Leonidas at the beginning of 300, facing down the CGI wolf. Or (and I do not believe I am using this as an example) the young Predators in Alien Vs. Predator, sent to Earth to prove themselves against the most fearsome beast imaginable (Paul W. S. Anderson).

Brody’s famous, initial reaction to seeing the shark suggests that he’s not much of a Predator. He snaps bolt upright, his limp cigarette a comically inadequate phallic symbol. “You’re going to need a bigger boat,” he tells Quint. Naturally, Quint refuses to acknowledge such a “deficiency.” 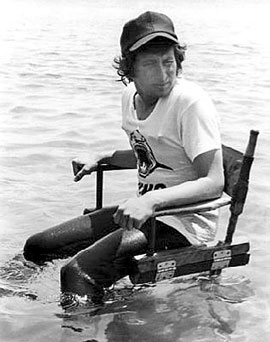 Brody’s two parental figures on the Orca are very different men. Quint is full of salty wisdom and folklore, and his strategy for killing the shark is a combination of instinct and brute force. One might even call him an artist (especially if one is trying to make an argument). Hooper is a scientist, who goes to sea equipped with chemicals, gadgets, and academic training. I think it’s very interesting that Spielberg’s mother was a concert pianist, and his dad was an electrical engineer. The dynamic on the boat, with the bickering “parents” and their awkward son trying to prove himself, suddenly seems a tad autobiographical.

Perhaps it’s a coincidence. But consider this: when Spielberg’s parents divorced, he and his father barely spoke for years. Now think of the scene where Hooper, the scientist, goes down in the shark cage, and then disappears. He abandons the “family.” This is a change from the novel, in which Hooper is actually killed by the shark. In the film version, he hides on the bottom of the ocean until his “son” takes care of the shark all alone.

Now we get to the movie’s literal castration scene. The shark jumps out of the water onto the deck of the boat. Brody desperately grabs onto Quint’s hand and tries to hold him, but he slips out of his grasp. The shark bites him in the crotch (or close enough to make my points). Brody averts his eyes as the shark thrashes around with his prey. It’s an echo of the opening scene with Cassidy and Crissie: Brody’s right there, and he’s helpless. 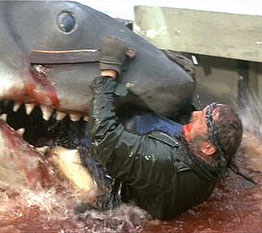 On the bright side, there's no way Hooper can top THAT scar.

Remember that Quint was always presented as a real he-man, larger than life. The fact that he dies, leaving Brody to save the day, was one of the movie’s many innovations. I may be conveniently overlooking a lot of great movies from the 60s (please use the comments to smack me down), but I don’t believe Hollywood had much love for the “unlikely hero” before Jaws. Hollywood’s Golden Age heroes tended to be more like Quint, less like Brody. I certainly don’t mean to say that all Blockbusters give us bumbling everyman heroes that have to rise to the occasion—Indiana Jones, Leonidas, and Tony Stark are all very Quint-like. But when the shark takes Quint underwater, it’s pointing the way to one of our most durable pop culture cliches.

It’s time for Brody to grow up, or die trying. Of course, we all know how lil’ Stevie Spielberg emerged from a painful childhood to become a man: he combined the skills of both his parents to become a filmmaker. According to Steven’s sister Sue:

Steven’s love and mastery of technology definitely come from our father. Mom was a classical pianist, artistic and whimsical. She led the way for Steven to be as creative as he wanted to be. 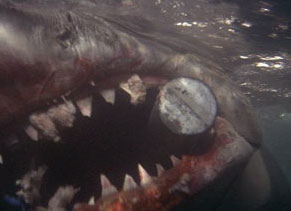 Now think about Brody, scared of water, all alone on the sinking Orca. Quint failed to defeat the shark with pure force, and Hooper failed to overpower it with science. Brody synthesizes his parents’ teachings: he takes Quint’s gun, an instrument of pure force, and uses it to blow up Hooper’s oxygen tank, a symbol of science. The combination of the two destroys the beast. (Note that this ending was invented for the movie.)

With the destruction of the shark, Brody’s manhood is redeemed. He has fulfilled his role as protector, and suddenly his fear of the water is gone. The thing that made him a flawed hero is now stripped away. He can return to his community redeemed, renewed, and reunited with Hooper, his absent father figure. “I think the tide’s with us,” he notes. Amity is welcoming him back.

Now if only he could do something about that swing set.

16 Comments on “You’re Gonna Need a Bigger Phallic Symbol: Jaws As a Journey from Impotence to Manhood”