[Enjoy this guest post on Transformers: The Movie – the original one – by Jessica Lévai!]

When I propose the idea of the female divine in Transformers: The Movie to fellow fans, the reaction I most often get is one of incomprehension, followed more often than not by the question, “Wait a minute. Isn’t Arcee the only girl in that movie?” This is a fair point. But as Marija Gimbutas argued that many world myths contained a coded history of worship of the Great Goddess, I say that a goddess of sorts is hiding in plain sight, in the form of the Autobot Matrix of Leadership.

In Transformers: The Movie, the Matrix is an oval-shaped object which glows with its own power and is housed in the chest of Optimus Prime, the current leader of the Autobots. When Optimus is fatally wounded in a battle with Megatron, he removes the Matrix from his own body and passes it on to Ultra Magnus, who acts as a sort of regent until Hot Rod realizes his destiny and is transformed into Rodimus Prime, the new leader. Not much is revealed in this film about the nature or origins of the Matrix, but even with this limited information we are presented with a few clues which support the idea that this is some sort of female divinity, perhaps the Transformer equivalent of the goddesses of life, death, and kingship worshipped by ancient cultures on Earth. 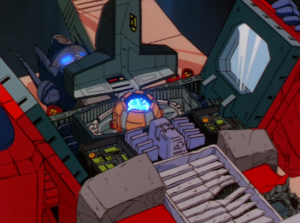 We can begin with the obvious: the name and shape of the object both suggest that it is feminine. The matrix is an oval shape, and round shapes (such as circles, ovals, and cups) are frequently assumed to be feminine, in contrast with the more phallic spears, arrows or points one might find. I myself am skeptical of this generalization, but it is popular in mythological analysis, and thus might be seen as an inspiration, however subtle, for the design of the Matrix in Transformers. As for the word “matrix,” anyone with a smattering of Latin can see that this noun is feminine. And while math class taught us this word refers to columns of numbers, and pop culture has conditioned us to think of Neo’s adventures with computer code, the archaic meaning of “matrix” is “womb” or, as my dictionary puts it, “something within or from which something else originates, develops, or takes form.” This sounds like a womb to me. One can take a slightly different point of view and see that the Matrix, an oval with a circular shape in the middle, might also approximate a vulva.

In Transformers: The Movie, we get the idea that the Matrix, beyond being a mere symbol of leadership, is in fact an intelligence, performing life- and royalty-affirming duties similar to that of goddesses from Earth’s ancient history. For starters, no Autobot can become Prime without the approval of the Matrix. After Optimus Prime dies, the Matrix passes to his designated successor, Ultra Magnus. But Ultra Magnus is never called Prime. Nor, despite some desperate tugging, is he able to open the Matrix. Even the religious catchphrase, “Till all are one,” avails him nothing. His inability to use the Matrix leads to his defeat by Galvatron, who then takes the Matrix for himself. Galvatron himself fails to activate the Matrix later, and both are be consumed by Unicron, the planet-eating villain of the movie. Clearly, Galvatron should have taken a lesson from Ultra Magnus and learned that the Matrix is a “virgin” goddess who will not simply yield to any Transformer who wishes to possess her. (I’m committing to the feminine pronoun.) She chooses her own consort.

The union of the ruler with a goddess was called hieros gamos, or “sacred marriage” by the ancient Greeks, and was practiced in cultures of the ancient Near East. One example is ancient Sumer, described by Curtiss Hoffman in his book, The Seven Story Tower. Every New Year, the king would show reverence to a priestess impersonating Inanna, goddess of sex and fertility. If she approved of him, they enacted the sacred marriage and she gave him the Ring and Rod, symbols of kingship. If the goddess did not favor the king, it could mean disaster, agricultural and otherwise. The Golden Bough, a (somewhat dated) classic of mythology study by Sir James Frazer, also discusses the relationship between the king of Nemi, in Italy, and the priesthood of Diana; he cannot rule without that goddess’s favor. Fortunately, Hot Rod does not need to kill his predecessor as Frazer outlines. One might argue that by coming between Megatron and Optimus Prime during their battle, Hot Rod is in part responsible for Optimus’s death. The Matrix chooses Hot Rod immediately; when he catches it from Optimus’s hand, it glows with a light no one else in the room seems to notice. Hot Rod, unaware that he is the chosen one, passes the Matrix to Ultra Magnus.

In the end, when all seems lost, Hot Rod is finally able to release the power of the Matrix and assume the title of Rodimus Prime. He does this, as all Primes must, by uniting with the Matrix physically and spiritually. While Galvatron kept the Matrix on a chain around his neck, and tries to yank her open, Hot Rod gently coaxes the power from her. It can be assumed that Rodimus Prime will install her into the port in his chest, as Optimus Prime had done before him. Though this is never made explicit in the movie, such an action does apparently happen on the later episodes of the “Transformers” television show. Metaphysically, the power of the Matrix causes Hot Rod to grow in size and power, and gives him the strength to defeat Unicron and save the universe. At one point in the movie, Blur tells the Autobots that without the Matrix, there is no hope. And what is life without hope? Just as the goddess Inanna could give life to the people of Sumer through the fertility of their crops, so does the Matrix use her power to help Rodimus Prime defeat Unicron, who is death personified. 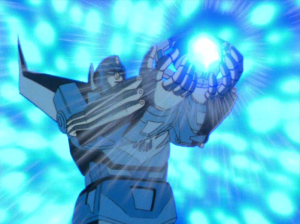 You've got the POWERRR - YEAH!

And the Matrix may also be seen as a benevolent goddess of Death. Just as the realm of the dead in Sumerian myth was ruled by Ereshkigal, the sister of Inanna, so the Matrix serves as a repository for the souls of the previous Primes. This is why Optimus, before he dies, tells the other Autobots that he will soon be one with the Matrix. This spiritual (or, perhaps, purely digital) union reflects the physical union Optimus shared with the Matrix while he was alive. During his own transformation to Prime-acy, Hot Rod hears the voice of Optimus through the Matrix, confirming that Optimus is one with it.

The idea of the Matrix as a goddess receives some support from media supplemental to Transformers: The Movie, though this is not without controversy. Specifically, we might delve into the work of Simon Furman, to whose work in comic books we owe much of the official Transformers mythology. According to the legends created by Furman in the British Transformers comics, Primus, the creator god, created Cybertron and the Transformers and gave the Autobots the Matrix, which was also a piece of himself. From that point on, Primus slept to hide from his archenemy Unicron. The Matrix continued as a symbol of leadership, handed from one reigning Prime to the next. Primus is referred to as male, though there is no indication that this is more than a convenient designation (and no real proof that gender is the same for Transformers as it is for humans). If the Matrix is female, then it follows that she might be considered the feminine principle of the creator god. Similarly, the author of the Kabbalistic Book Bahir describes Shekhinah, a grammatically feminine noun used in Talmudic texts to refer to God, as a consort and daughter of the masculine divine. This idea of male and female divinity was made central by Kabbalists such as Zohar, though not universally accepted. (Joseph Dan’s Kabbalah: a very short introduction gives a good summary of the development of this idea.)

Furman’s mythology does clash with the creation story laid out in the third series of the “Transformers” television show. According to those episodes, the Transformers were created by the Quintessons. The Quintessons play only a marginal role in the movie. They appear as frightening and dangerous judges, and do not seem to have any connection to the Matrix. According to Wikipedia, though the Quintessons’ story predates the Furman material, Hasbro has made the myth of Primus canon. This is a point which remains contested by some fans, despite an attempt through a comic book to meld the two stories into a consistent whole.

The evidence in Transformers: The Movie, as well as the comic book series, demonstrates that the Matrix is not merely a symbol of leadership to the Autobots. It is also a being with the power and authority to select the new Primes, augment their powers, and receive their souls when they die. In light of the myth of Primus, the Matrix can be interpreted as the feminine principle of their creator deity. These attributes make her a goddess of life, death, and regeneration. As a final note, it is interesting to see such a feminist interpretation of material that is, stereotypically, the province of male fans. 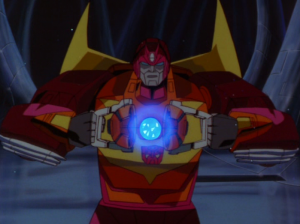 Jessica Lévai is a professor of mythology and folklore. She admits that she sometimes writes essays for fun.

[Want to debate anthropological mythology as it applies to transforming robots? Does Michael Bay’s theory of the Allspark jive with the classical interpretation? Sound off in the comments!]

6 Comments on “Evidence of the Female Divine in Transformers: The Movie”