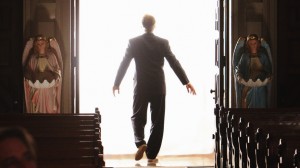 This disappoints me.  Don’t get me wrong; I liked the finale as I was watching it.  I’m always going to love Lost as a whole, as incoherent and sentimental as it turned out to be.  I’m never going to wring my hands and say, “One-hundred and twenty-two hours of my life—wasted!”  We all know that simply isn’t true.

Nevertheless, I’m disappointed with the last ten minutes of the show, particularly the new religion it created.  Not only is this religion annoyingly conservative for my tastes, but it is so couched in fantasy that it is of no use to us, the viewers living in the real world.

The Life and Afterlife of Jeremy Bentham

I think the best way to approach the failures of the finale and the last few seasons of Lost is to focus first on one character: John Locke.  Just as we never got the chance to fully understand and mourn the fact that the reset never worked—in fact, because we were never given the chance to understand and mourn the fact that the reset never worked—we were never given the opportunity to properly mourn John Locke, the original Man of Faith.  We first learned that Locke had died at the end of season four, in “There’s No Place Like Home, Parts 2 and 3.”  We didn’t mourn him then, because the identity of Jeremy Bentham was presented to us in a flashforward; John Locke was still alive and well in the “now” of the Island world.  In other words, for all intents and purposes, John Locke was still “alive” to us at that moment.  There was no need to mourn for him—yet.

We then saw Locke’s death occur on-screen in the middle of season 5 in “The Life and Death of Jeremy Bentham.”  Again, we were not given the opportunity to mourn him, because it seemed that Locke had somehow been resurrected on the Island.  How can you mourn someone when they won’t go away? 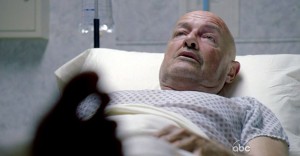 It was then revealed in “The Incident” that the real John Locke was dead all along, and that the Smoke Monster had taken his form.  Even then, we still were not given a chance to mourn the real John Locke, because we were given the hope that the bomb reset had worked and that Locke survived in some kind of parallel universe.  Lo and behold, at the beginning of season 6, we were presented with a flash-sideways that seemed to prove that, yes, John Locke was still alive and well in an alternate timeline.  It was only at the very end of “The End” that we learned John Locke had been dead all along—dead is dead; whatever happened, happened.  But even then, this huge revelation was so underplayed that it was not even mentioned by the script at all.  John Locke is definitely dead now, no way around it, and yet we’re still not allowed to mourn him.  Why should we?  He’s still walking around in Sideways Limbo, seemingly thrilled to be dead.  When he regains his memories about the awful things he experienced back in the real world (like being crippled, being shot, being strangled, remembering that his stupidity almost destroyed the Island he so loved), he (like all of the other Losties, weirdly) starts beaming like a fool.  “Hooray, I’m dead!” he seems to be thinking. “And isn’t it great that I now remember how awful my life used to be before I was murdered?”  To make matters worse, Locke even forgives his murderer.  Dead is dead, the show seems to be saying, but who cares?  Everyone will still be alive—and happier!—in Sideways Limbo.

The last ten minutes of the finale, then, do not represent a final funeral for Locke and his dead buddies but actually a kind of awards ceremony for Locke.  According to this finale, Locke, the Man of Faith, was actually right all along.  In this final scene, the entire cast, including Jack, the one who had the hardest time letting go, happily acknowledged that John Locke was always right.  This bothers me not only because I’m a Woman of Science, but because John Locke was evidently not right.  His whole life was wrong, wrong, wrong.  His misplaced faith got him killed, allowed the Smoke Monster to grab power, and almost destroyed the entire world.  The show doesn’t linger on these pesky facts, just as it doesn’t linger on the fact that the bomb didn’t work (and in fact killed loads of people), because they might undermine the major themes of faith and “letting go.” 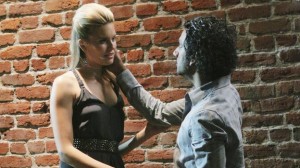 Murder and torture dozens of people and you, too, will get a whiny blonde girl in Heaven.

According to the final ten minutes, the entire show was about “letting go” (and hanging out with your friends).  To get into Heaven or whatever that white light is, you need to do two things: let go of your psychological hang-ups and come in physical contact with a loved one/constant.  Notice what you don’t need to do to get into Heaven: be a good person.  Killed more than 40 people and stole a baby?  Whatever, as long as you learn to forgive yourself.  Did your insatiable ego lead to the deaths of dozens of your friends?  Fine, as long as you get over your daddy issues.  Blew up your dad?  Strangled your friend’s dad?  Buried an axe into the chest of an innocent Other?  Spent so much of your life torturing people that you actually introduce yourself as “Sayid, torturer”?  All meaningless, as long as you eventually “let go” of the fact that you used to be a terrible person.

So, why doesn’t Lost allow us to mourn John Locke’s tragic, epic f***-up of a life?  Because, according to Lost, it doesn’t matter that Locke screwed up.  It doesn’t matter that Locke’s actions got himself and many others killed.  Ultimately, actions on Earth don’t matter.  All that matters is faith and that happy white light and true love and puppies and babies.  In short, Lost presents us with the nicey-nice wish-fulfillment parts of a bunch of different religions and ignores a major fact of life for non-scripted human beings: that, in real life, whatever happened, happened.  Actions have consequences.  Dead is dead.

I’m not a big fan of the Christian conceptions of heaven and hell, but at least they somewhat focus on the consequences of your actions.  If you do wrong, you suffer in hell for eternity.  If you’re good and faithful, you get to chill with Jesus for eternity.  I don’t believe it, but at least it allows for some kind of real-world morality.  The new pseudo-multicultural religion Lost’s finale provides is particularly crazy, because it not only allows for death-bed conversions; it allows for POST-death-bed conversions.  (At least, it does for everyone except Michael.  Don’t ask me why he’s the only one who doesn’t get a second chance in Sideways Limbo.)

Of what use is a finale like this, when it doesn’t mirror anything we actually experience in real life?  Do we just want a happy ending because we like these characters?  Yet, in most art, as in life, simply being likable does not necessary earn you a happy ending.

Or is it that we enjoy the theme of “even sinners get second chances”?  I would be fine with that theme if it seemed like most of the Losties actually made good use of their second chances and earned their way into Heaven by doing good deeds.  But most of them didn’t.  Only Jack, Sayid, Desmond, Michael (!), Charlie and, arguably, Sawyer (when he jumped out of the helicopter) sacrificed themselves for the greater good.  I’ll let Hurley come to my version of Heaven, too, because he was always a good person.  The rest of them?  I’m not sure if they’ll be allowed past my pearly gates.

If the ultimate moral of the story is, “If you live together, you get to die together, too, in Happy Shiny Sideways Purgatory,” then Lost still is kind of a failure, because these characters didn’t live together throughout most of the show.  If we look back at seasons 2-6, we’ll see that these “best of friends” spent most of their time engaged in-fighting as their groups fractured into smaller and smaller rival tribes.  Even at the very end of the show, Lapidus, Miles, and Richard decided to leave the Island without Kate, Sawyer, Ben, Jack, Desmond, and Hurley, in a “Screw them!  We’re looking out for ourselves” moment.  And it’s not like Kate, Sawyer, and Ben did anything to help Jack re-plug the Island.  No, let Jack do it himself.  If Jack doesn’t do this alone, they’d all die together.  Live alone, die together?  Wait a second.  That’s not how the saying went. 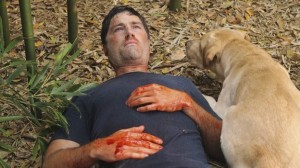 Live together, die with a dog.

So, yeah, in the end, I think Lost pulled a happy ending out of its ass.  If I had written it, the Sideways Limbo World wouldn’t have existed, and the show would have ended with the bittersweet ending of Jack dying for his friends.   Jack still would have gotten over his daddy issues, he still would have “let go,” and he’d still have faith.  The themes would remain the same, but they’d go down a lot smoother for some of us.   Better still would be an ending in which all of the living characters actually worked together to save the day instead of just letting the White Male Chosen One do it on his lonesome.  Then the “live together, die alone” theory would have actually panned out, because Jack would have died with his friends around him, happy that they could save the world as a team.

On the next page: an Overthinking Lost Bonus Feature!  Let’s look back and see if any of my predictions for this show ended up being correct.

33 Comments on “Overthinking Lost: The End.”