In this episode, we saw a lot of Ben and his sweet, puppyish alterna-self.  You may remember that before this season started I had hoped that Mr. Linus would be redeemed and get a big heroic death.  Earlier this season, I kinda-sorta got my wish: our old dastardly friend Ben, it seemed, had turned into a Good Guy.

Then this episode happened.

And, I must say, it was damn nice having Evil Ben back.  I didn’t know how much I missed him until he returned.

(I know where I stand on this issue.  Let Evil Ben be Evil Ben.)

This week, we also saw a scene I never thought the show would allow us to enjoy.  Jacob actually sat down with his remaining Candidates and told them what The Point of it all was.  He even allowed them to have a brief Q & A session with him!  That’s pretty good for a demi-god.

Question 2: If you could ask Jacob any question, what would you ask, and what do you think his answer would be?  (My first question would be, “All the stuff you told the Losties in this episode… why didn’t you tell them all of this in the first episode?!”  He’d probably give me a dirty look in response.) 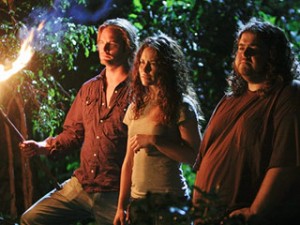 Question 3: Any final predictions before the finale?  Speak now or surrender your right to say “I told you so” next Monday morning.

Question 4: What are your greatest hopes and fears for the finale?  (My greatest hope is that Smokey does destroy the Island, allowing him to escape to the Sideways-verse, where he ends up being destroyed by all of the Alt-Losties.  This would allow Ben to be evil in the Island Universe AND get redeemed in the Sideways Universe.  Oh, and then Alt-Ben and Alt-Rousseau totally get married and we get a spin-off sitcom about them, Arzt, Locke, and Alex, and also Hurley and Desmond turn up sometimes as recurring guest stars.  What?  This is a good idea, I promise!)

See you folks on Sunday when EVERYTHING! WILL! END! EXCLAMATION POINT!

11 Comments on “The Overthinking Lost Open Thread: “What They Died For””