Question: any movies at Cannes this year that you’d actually like to watch? Like, in a theater? (I have a few, but I’ll let y’all go first) 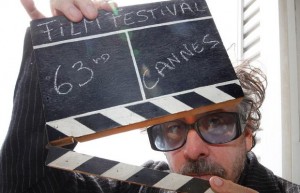 How about I produce a gothic remake of the 63rd Cannes Film Festival in twenty years, huh, Burton? How would you like THAT? Huh?

Second, geeks the world over mourned the passing of artist Frank Frazetta earlier this week. It’s easy to dismiss his paintings as fan service – maidens in revealing gowns clinging to the rippling thighs of shirtless warriors. But Frazetta’s work transformed the genre of fantasy art so thoroughly it’s hard to imagine what it was like before. Plus, at least his paintings were evocative. At least when you picked up a flimsy paperback with a Frank Frazetta cover you knew what you were in for. No pale hands holding apples for this guy.

Question: Frank Frazetta’s painting a picture to go on the cover of a pulp novel detailing your life’s adventures. One, what does he depict you doing? Two, what is the title of that novel? 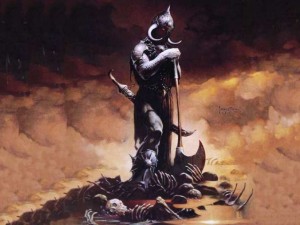 While this picture will never be in a museum, that also means no one will spend twenty minutes staring at it asking: What does it MEAN?

Do you want to see some iron-thewed barbarian lay waste to the Palme d’Or Jury? Or is there something we missed? Sound off in the comments, for this is your … Open Thread.