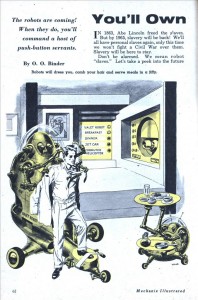 On the “America is still pretty damn racial” side of argument lies the fact that will.i.am seems to have felt the need to hide himself inside a full-body robot costume in order to play Journey songs at a bunch of folks from Philly and southern New Jersey. His face was covered with a robot mask while his voice was so autotuned as to be inhuman. Something just felt a little weird. 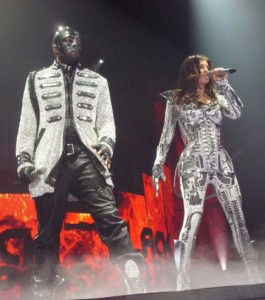 will kept the mask on for a while. Fergie, the hot white girl, wore no mask, or, for that matter, pants, for most of the show.

The word “robot” was introduced by Czech playwrite Karel Capek in his 1921 play Rossum’s Universal Robots. Capek’s robots were made of flesh, but were literally built by the Rossum Corporation (for which Joss Whedon named the villainous corporation in Dollhouse) to serve as a servile caste for human beings. Like their predecessor, the Golem of Prague, Capek’s oppressed robots rebel and bring an end to humanity.

In fact, most robot stories are stories of slave revolt. From the Cylons to the Replicants to the I, Robot robots to the machines in the Matrix, popular culture often warns us of the danger of subjugating a conscious race. It’s an old story, one that goes back to the Spartans and their Helot slaves or the Romans and Spartacus.

I’m in no position to judge anything or anyone and I respect will.i.am as an artist and as an activist, but it does seem strange to me that the politically aware African-America front man of the most popular band in the world would dress as the modern cultural equivalent of a slave.

When I first started talking about this concert, Fenzel introduced me to Afrofuturism as a potential explanation of will.i.am’s performance. Afrofuturism, as defined by Wikipedia, is “an emergent literary and cultural aesthetic that combines elements of science fiction, historical fiction, fantasy and magic realism with non-Western cosmologies in order to critique not only the present-day dilemmas of people of color.” When Sun Ra puts on the shiny metallic crest of the Pharaohs or when George Clinton goes up to the Mothership, that’s Afrofuturism. 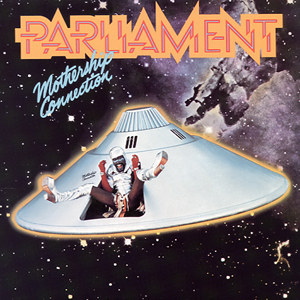 Afrofuturism also gave George Clinton the power to funk in a vacuum.

But in those cases, neither man covers his face and both artists are being taken up in one way or another. Afrofuturism is about the ascendance of African Americans and about seeing their history and traditions through new lenses. Sun Ra styles himself after a god ascending to the heavens, but it’s still Sun Ra. George Clinton is getting up for the down stroke with higher beings, but there’s no mistaking that George Clinton is doing the funking. will.i.am, meanwhile, hides his face behind a mask, putting forward the public face of an artificial being created specifically to serve others.

Looked at this way, it’s hard not to believe that race played a major role in this costume choice, making the concert a counter-example to the concept of post-racialism.

I don’t have an answer here. I don’t know what will.i.am intended with this costume, but I do believe that he intended something.

Was it a comment on technology and the way it can break down traditional barriers to create a post-racial society?

Was he portraying the end of the usual robot story, when robots have lifted themselves out of slavery and taken over?

Or was it just a cool costume?

Let us know what you think in the comments.

PS: For another look at music and robots, check out Sheely’s post about Kanye West and Robocop

PPS: One of my favorite things that ever happened was the CNN coverage of the 2008 election night. Around the country, they set up tents with dozens of cameras inside so that guests could appear as a 3D hologram in the studio to talk to Anderson Cooper. Millions were spent so that we could watch news anchors have 3D conversations on our 2D TV screens. will.i.am appeared as one of those guests. He missed an incredible opportunity to become the personal hero of geeks like us by ignoring Anderson’s questions and repeating over and over: “Help me Obi-Wan, you’re my only hope.” 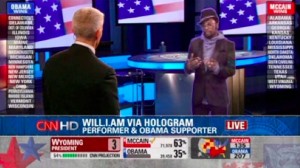 will.i.am gives Anderson Cooper the plans for the Death Star.