Man.  This episode.  If “Happily Ever After” brought tears to my eyes, “Everybody Loves Hugo” did something just as good: it made me laugh.  And not only because it was funny–although, at times, yes, it was.  I’m not sure what I liked best: the return of Hugo’s overbearing mother, the way Sawyer said “sonofabitch” when he saw Hurley in the woods, or the way Hurley said “um…hey” to Un-Locke right after.

So let’s talk about what made me laugh, in order of events.  First, at the beginning of the episode, a certain someone got blown up.  No, no, “blown up” isn’t strong enough.  How about, “got a’sploded”?  Yeah, that’s better.  Oh, I laughed–nay, guffawed–when old Dr. Arzt got himself a’sploded back in season one, but this!  In comparison, this made Dr. Artz’s a’splosion a mere prologue.

Questions, discussions, and spoilers all after the jump.

Question 1: Was anyone else as overjoyed by this death as I was?  Or am I outing myself as a psychopath by admitting that I laughed–so very, very hard–when that certain someone went kaboom?

Question 1b: Which annoying side character’s death made you laugh the hardest?  This week’s death?  Dr. Artz’s?  Frogurt’s?  Tricia Tanaka’s?  Nikki & Paolo’s?  Someone else’s? 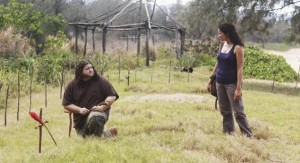 What made me laugh next was Desmond’s Zen reactions to Smokey/Locke.  “Do you know who I am?”  “Of course.  You’re John Locke.”  Priceless, Des.  Priceless.  And then Smokey’s frustration that he couldn’t get a rise out of Desmond?  ‘Twas a thing of beauty.

Anyway, while we don’t know what Island-Desmond’s plan is just yet, it seems like Alt-Desmond’s plan is to act like a slightly more active Jacob who goes around pushing people either into “true love” situations (like Alt-Hurley) or into “near death” situations (like Alt-Locke) in order to get them to remember their Island lives.  (Incidentally, Alt-Desmond’s act of smashing his car into the still-paralyzed Alt-Locke was the third thing that made me laugh this week.)

Question 2: Once the Alt-Losties remember their Island lives, what then?  The guys on EW.com seem to believe that there’s going to be some kind of soul transmigration, that the Island Losties’ minds and souls will somehow be transported to the Sideways Universe.  I think it’s more likely that, if there is a soul transmigration, it’ll work the other way: the Alt-Losties will move their minds to the Island world, so that the Island folks have both sets of memories.  (Since I decided last week that the Sideways Universe is probably fake, this kind of transmigration makes much more sense to me.)  This leads us to

Question 2b: When Alt-Locke retrieves his Island memories, will they be just his, or will he get some of Smokey’s memories, too?  And if there’s some kind of soul transmigration one way or the other, what will happen to Alt-Locke?  Will Smokey take over Alt-Locke’s Sideways form, or will (as I hoped back when season five ended) Real Locke kick Smokey out of his Island body and become John Locke’s Second Coming?  Or do you believe that Alt-Locke is and always has been Smokey in disguise?  Support your thesis with evidence and MLA citations. 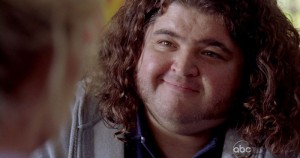 Speaking of Smokey, another line that got a chuckle out of me was his, “That’s the best argument I’ve heard against captivity,” after Desmond’s “Why tie me up when I have nowhere to go?”

Okay, this was a Hurley episode, so let’s talk Hurley, shall we?

This week, Hurley finally became the leader I always knew he could (and, arguably, should) be.  Even when he’s not getting messages from Jacob or Michael or whoever, I’d listen to him over almost anyone else in the cast.  (Aside: Sigh. That position used to be filled by Sayid.  How the mighty have fallen…)

And one final question, unrelated to any of the above:

29 Comments on “The Overthinking Lost Open Thread: “Everybody Loves Hugo””