By all rights, I shouldn’t have liked this episode of Lost at all.  Not very much happened, and the things that did were already foregone conclusions.  “Ab Aeterno” told us that, yes, Richard was going to return to the beach camp; “Sunset” told us that Jin was somehow going to end up in a walk-in freezer.  Many of us already guessed that Desmond was the “package” in Widmore’s submarine, and “LA X” gave us some hints that Jin and Sun weren’t married in the Alterna-line.

And yet, despite all that, I had a lot of fun watching this episode.  It just goes to show that snappy dialogue and amusing humor-jokes can make a relatively plotless TV episode feel like a well-spent hour.

So, questions.  A lot of people on the Internet have been complaining: If Jacob is dead, why hasn’t the Man in Black left the Island yet?  Well, this episode gave us one new reason and one reminder about why.  First, as was suggested way back in season four, Smokey can’t fly over water — just like Dracula!  And, second, according to Smokey, he can’t leave unless all of the Candidates leave the Island together, at the same time.

Question 1: Am I the only one who got the impression that, when Smokey said, “You all have to leave the Island at the same time,” he meant, “You all have to be in the same place so I can arrange your deaths”?  Or am I being too cynical about the MiB’s motives?

Speaking of the Man in Black and his shifty sneakiness…

Question 2: When the Man in Black said that Kate’s name wasn’t on the wall of the cliff cave, was he telling the truth or not?  If so, why is Kate’s name on Jacob’s Lighthouse list but not the cave list?  And do you think she has a purpose to Locke besides being a really good piece of bait for Jack?

Question 3: Why is the Man in Black keeping Claire around, again?  Is it just to freak Kate out, or does it have something to do with Jack and Christian?  Or is the Man in Black really just a nice guy who keeps his promises to adorable Australian psychopaths? 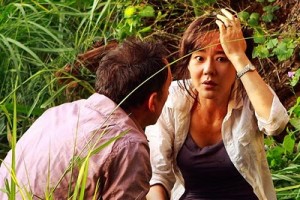 In other news, last night we saw the return of Badass, Well-Written Sun.  Oh, Badass, Well-Written Sun….  How I’ve missed thee!  Remember when you were threatening Charles Widmore and arranging hostile takeovers of multinational corporations just to piss off your dad?  Remember when you knocked out Ben Linus with an oar?  Remember when you were doing something other than whining about your missing husband? Well, now I remember.  And, let me tell you, Sun, that scene this week where you unbuttoned your cardigan?  Managed to be sexy and ironic at the same time!  Good show, Sun.

Question 4: But, uh, Sun, sweetie?  What’s the deal with the aphasia?  Was that really important to the plot at this point?  Or were the writers just using you to fill out a too-short episode?  Or was there, perhaps, a thematic reason for your inability to speak English all of a sudden?

BONUS FANGIRLING: Desmond!  Keamy!  Patchy, too — and he got shot in the eye!  Jack’s finally acting like a real hero again!  Ben seems to be acting like a truly nice guy!  That scene where Jin saw pictures of Ji-Yeon for the first time was awesome!  And so was Miles’s snark about Hurley and barbecue sauce argh, bacon grease, excuse me!

Question 5: What would you like to exclaim about this episode?  Be sure to use as many exclamation points as possible.

21 Comments on “The Overthinking Lost Open Thread: “The Package””