Not much to say about this week’s episode, which was decent but a bit filler-y for my tastes.  My favorite Sawyer episodes are the ones that con the audience (i.e., me), so I was a wee bit disappointed that Recon was so straightforward.  On the other hand — Miles and James are cops now!  Charlotte and James totally bone in the alter-verse!  I really dug Evangeline Lilly’s acting for once!  Un-Locke may or may not have a crazy mommy!  And Widmore’s doing… well, actually, I have no idea what he’s doing.  But, still: Widmore!  In other words, in a not-totally-spectacular episode, a lot of fun moments shone through.

Now onto the questions!

Question 1: Like the B-story in last week’s episode, Recon‘s alt-plot seemed like a pilot to a spin-off series.  Which of the following Lost spin-offs would you most like to watch on a regular basis?  Hangin’ With Dr. Linus?  Straume & Twang (my name for USA’s new quirky cop show, starring Miles Straume & James Ford)?  The Good Shephard (a new Everwood-type show about a big-city doctor with daddy issues who learns about faith and family after moving to Provo, Utah)?  [Insert your own punny Kate- or Locke-based show here]? 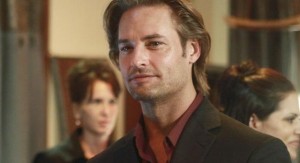 Question 3: What are we thinking about Claire now?  Is she crazy-evil or just crazy-crazy?  Did the “infection” make her go nutso, or did the supposed Aaron-napping do it?  And can she ever turn back to the light side?