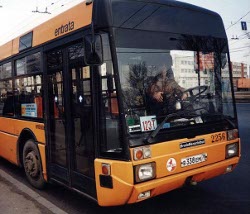 SoShy – the French recording artist who is the whole reason this song exists – makes her dramatic entrance … riding a bus and not doing much of anything. Oh, she’s watching the Asian dude, who is either a vampire or a lawyer (Is there a difference? Yuk yuk yuk. I’ll be here all week.) and singing about sex and romance for no discernible reason.

I got a little secret for ya
I never sleep when comes the night
But everytime I snap my fingers
I switch back into the light
My moon belongs to your sun
Your fire is burning my mind
Is it love or is it lust?
Something that I just can’t describe (ah)
Am I the one and only (ah)
Cause you’re the only one (ah)
It felt so long and lonely (ah)
Waiting for you to come
It’s lookin bright and early
I’m willing to close my eyes
This is the unusual story
Timbo and SoShy

Okay, here the song is sort of getting to its point. I think it’s safe to say that this verse is in dialogue with the first verse, and SoShy is supposed to be the woman in the first verse who really likes Timbaland a lot, but about whom is a little more than ambivalent.

The first three lines are straight-up virgin/whore dichotomy – or, if you think sexism is Ludacris, “a lady in the street, but a freak in the bed.” She stays up late devilishly, but she can play the good girl whenever she wants and make the transition effortlessly.

Maybe the feminists should edge closer to the front of that line.

The moon and sun stuff is straight-up sexual subordination – the man generates the light, the woman just reflects it.

Oh, except, of course, the man is a vampire, so it doesn’t make sense for him to be the sun, because the sun is at lest an inconvenience for vampires, even these days. We’ll set that aside for the moment.

But there is the moon and mind-burning fire, which again are associated with the occult – not, I think, for any representational reason, but as I mentioned before, because I think they reflect social anxiety about the fact that none of this actually means anything anymore and Timbaland and SoShy, along with the four other songwriters who worked on this song, have no real idea what it means or why it is popular – just that it is.

The love/lust dichotomy seems a bit out of place in the landscape of pop-music hedonism – almost quaint. The conclusion, though, is that this is neither – it’s an obsession bordering on codependency. Or straight-up dependency, with no “co” about it.

But it’s not as interesting here as it is in section 3.

Here, SoShy gets even more confusing in the light/dark imagery – that she’s descended into a sort of conjugal darkness to get involved in pop music, but at the same time she has been made so happy and satisfied by her business relationship with Timbaland that it’s like she’s going to sleep on a Sunday morning with him – the time when she, as a cat/vampire/French woman, is most vulnerable.

And I have no idea why everybody but SoShy leaves the bus and there is a light coming out of the bus bathroom. Maybe it is an expressionistic portrayal of her discovery of the light she found in collaboration with Timbaland. Maybe everybody left the bus because the bus bathroom was full of solid potassium that is on fire now because somebody got water on it. Your guess is as good as mine.

SoShy has stopped the Asian lawyer from getting off the bus, so the American exchange student isn’t going to be served with a subpoena to Vampire Court – which, if I made it into a movie, would make me a million dollars. 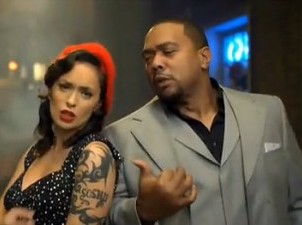 This is where the video gets seriously convoluted. There is an innocent-looking guy in a cardigan over a sweater-vest over a dress-shirt with tie, a blond girl who is probably a vampire with a necklace of a solar eclipse, a bunch of capoeira-inspired breakdancers who are probably also vampires, SoShy is wearing a beret and showing off sick tattoos with Timbaland in a cross-dance floor vampire confrontation that isn’t a confrontation at all, somebody has a fancy camera phone (the second time a smartphone of some sort has shown up in this video) and Nelly Furtado hanging out with the kitchen staff – who are only barely tolerant of her presence – dressed up like she was just on a 1986 episode of Star Search.

I need some R.E.M. but
I don’t like sleepin alone
So come and pick me up as
soon as you put down the phone
I wanna get into trouble
Later you’ll carry me home
I wanna go undercover
I just wanna rattle your bones
Yes I’m the one and only,
But I’m not the only one
So let’s work overtime
On this shift – it ends with the sun
Maybe we can start a riot
Maybe we can bomb this town
Maybe I’ll be your vampire
We can figure it out!

“We can figure it out,” indeed.

We finally see the word “vampire” in the song on a big prosodic place of emphasis, which retroactively puts in context all the times it was being referred to obliquely (like how Timbaland gets up late, goes home late, and has an hourglass rather than a clock or watch or smartphone) and confirms some of what we suspected about the cats and bats from the chorus, while not really elucidating any of it.

I think this is by far the most direct and sensible verse in the song – Nellie basically owns up to wanting to have a one-night stand and makes the hard sell. See, Nellie has worked with Timbaland long enough for their meta-sexual (not actually sexual, as far as I know) collaborative relationship to take on a more mature, somewhat jaded, comfortable and unapologetic angle – she’s not wowed like the younger SoShy is by the prospect of being made famous.

We see the “one and only” / “only one” dichotomy again, but instead of being used to pursue true love, it’s a boast and a rejection of monogamy. Yes, she’s famous and worthwhile, but no, she’s not the girl you’ll bring home to mom. By extension, she also has realized that Timbaland actually does produce other acts, and just because you happen to be his current star, that doesn’t mean you’re going to keep the title. Sometimes you have to humble yourself and do workmanlike things — like sing the extra verse in the second version of a disposable pop track that’s sort of about vampires.

Is this a cautionary tale for the young SoShy? Doesn’t really seem like it. The verse seems like a bit of a non-sequitur in the larger narrative; she’s identified as Nellie, she’s not implicated in the lyrics in any relationship with Timbo or SoShy. She wants what she wants – and when the sun comes up, it’s over.

At this point, you may have figured out the song that is the ideological predecessor to this one. It’s similarly sloppy (though superior in most ways), and has some pretty sick riffs, which match up with this song’s pretty sick beats. Oh, and it has the original Crazy Eyes McGee of pop music. If you haven’t figured it out yet, here it is in all its glory:

I could write a whole other article about the similarities between Timbaland and Meat Loaf. Perhaps I will someday.

I do really love how horrified the blond girl appears to be when she sees Timbaland and SoShy. In this fictional universe we will very soon and blissfully leave forever, they are apparently incredibly badass vampires, despite the fact that all they do is ride the bus and make crazy eyes at people. Heck, I passed at least a dozen people who do that all the time on my way home from the subway tonight. 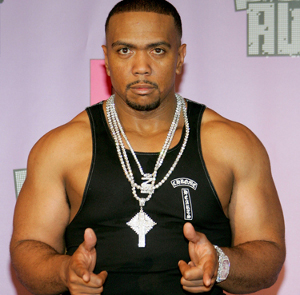 Section 4 – Oh, the last minute and twenty seconds of the song is filler

And then they repeat the chorus a whole bunch of times, with Timbo making fun of his faux-sentimentality and begging somebody not to leave him in the morning (Nellie? SoShy? Unclear.).

There’s a palpable lack of meaning that courses through a lot of this song – just so much going through the motions and repeating cliches for the sake of having something commercially palatable to say –  which is I think why we can fit in this awful, tacked-on vampire thing in the first place.

And that speaks volume as well. Like an adolescent who wears triply thick eyeliner in a nonspecific attempt to fill a void or patch up an uncertainty or confusion in life – to shore up identity which feels under threat from parts unknown – the country and the world go pseudogoth when they have nothing better to do, when there’s a sense that there ought to be a meaning in a place where there really isn’t.

In that sense, the vampire phenomenon as it is makes particular sense among older people as an eternal youth fantasy, or among modern religious people as an abstinence fantasy. Speaking as somebody who saved sex for marriage for a long, long time before giving up on it, it can be very disorienting and saddening to realize that something you really care about and made part of your identity – like young love or sexual abstinence – passes just like anything else in this modern world, without much remark or the comfort of genuinely intrinsic value.

You want it to mean something. You want it to mean something so badly. So you associate it with resonant fantasy images. You look for ways to season it with undeniable purpose — and to raise the stakes, like slathering the trappings of mythology over it. You’re not just a late bloomer — you’re a hero who held out. You didn’t just give up out of boredom — you were seduced by a vampire! It’s all part of our quest to make things that we are not comfortable with demystifying less mundane than we know they are. But since we know they are mundane, we do not require of our fantasies that they be robust and purposeful, so long as they provide the appearance of it. So, it’s a hollow, incomplete fantasy – an echo of a story that once mattered.

See, now here I am going all vampirish. Somebody give me some pomade for my widow’s peak and call Timbaland. I want to make a music video about nothing in particular, because I’m adrift – a vampire who doesn’t even know whether it’s nighttime or morning anymore; and to whom it no longer matters. Bring it on, Crazy Eyes! 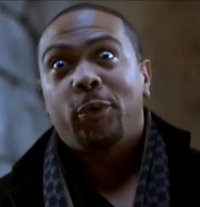