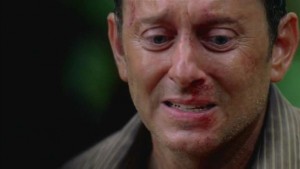 Can we talk about irony for a second?

Yeah, I know: this is an Overthinking Lost post.  We should be talking about Egyptian mythology, or Jungian psychology, or, I dunno… Jesus?  But today I’d like to take off my former-English-major hat, if only for a moment, and replace it with my writer hat.  Because, damn, people.  That was a well-written episode.*

Irony in Lost: A Retrospective.

In Ancient Greek, the word “eironeia” (a.k.a. “irony”) means “deception,” so what better episode to discuss this concept than one about Ben Linus, the most deceptive character in the history of ever?  Almost every millisecond of Dr. Linus was infused with some brand of irony:

Situational and/or cosmic irony: Lapidus missed Oceanic 815 because he overslept, but he still ended up crash landing on the Island, anyway.

Another example of situational irony: Now RICHARD is the screwed-up suicidal unbeliever and JACK is the one with all the answers.

“Ironic echo”: When Miles repeated Ben’s line about seeing someone standing over a body with a bloody knife.

An example of what I like to call “meta-level” irony: That moment when Miles mentioned Nikki, Paolo, and the diamonds, which made me chuckle and say, “Hey, the writers DIDN’T forget about them, after all!”

But really, the big winner in this week’s “irony contest” was Aristotle’s favorite: dramatic irony.  In case your memory is foggy, that’s the type of ironic tension that occurs when the audience knows something that the characters do not.  For instance, when Othello says, “Man, Iago, you’re a really great friend,” that’s dramatic irony.  And when Oedipus says, “I’m going to catch that bad man what killed my paw!” that’s dramatic irony, too.

It’s also type of irony that I think I’m going to begin referring to as HA!-type irony, because if you look at my notes from this week’s Lost episode, this is what you will see: 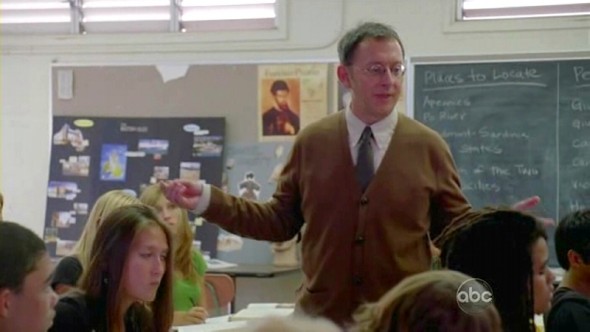 We Lost fans are always going on about how little we, the audience, know in comparison to how much the writers know and withhold from us. That’s obviously a huge part of Lost, but Dr. Linus reminded me that it’s not the best part.  No, Lost is at its best when it operates the other way, when the viewers know more than the characters do, not the other way around.

I’d argue that this is why Lost’s season 1-3 flashbacks were so popular.  Yes, it’s always great to have background information to round out a character.  But you know what’s better?  Knowing things about a character that the other characters do not know! Shocks and surprises are loads of fun—remember when Sun started speaking English out of nowhere?  Pretty great, wasn’t it?  But wasn’t it also great to watch Sun try to not speak English in front of Jin, even when we, the audience, knew that she could?  Mmm, the dramatic tension!  Didn’t you just want to eat it up?

Dramatic irony, then, was the reason I originally thought the flash-sideways were a fun idea.  Okay, some of them didn’t work so well (*cough* Kate’s), but the best of them show how Lost can wield dramatic irony like a knife, not only in a superficial “ha-ha” way but in a tragic “if only they knew!” way. 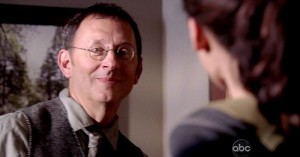 This is the reason I liked this week’s episode so, so much more than last week’s.  Sayid and Ben have long been two of my favorite Lost characters, so I should have appreciated their “centric” episodes equally.  But Sayid’s episode, for all of its sound and fury, fell flat for one simple reason: it lacked irony.  Let’s compare and contrast, shall we?

Sayid’s story has always been the same.  It’s a tragic tale of thwarted redemption.  Sayid has tried harder than anyone, since the beginning of the series, to make up for his violent past, but, time and again, he falls back into his old patterns.  “My name is Sayid Jarrah, and I’m a torturer.”  Tragic, man.  Just tragic.

But by the sixth season, I wanted to see something new in his story.  In the flash-sideways of other characters, we saw their old stories from a new angle.  Jack’s flash-sideways in Lighthouse, for example, looked at his old themes of daddy-hatred, but this time Jack was the father, not the son.  We also saw that, contrary to what 2007-Island-Jack said, he actually has the capability to break the cycle of abuse, move past his daddy-issues, and become a better father.  That’s dramatically ironic, but in a more subtle way: we, the audience, now know something Island-Jack doesn’t know about himself.  To me, that’s really satisfying.

Likewise, this week, we learned something about Ben that Ben didn’t know about himself: that he could be selfless.  That’s not “ha-ha funny,” but it is ironic.  We know more about a character and his situation than the character knows himself.  For once, we had a leg up on old Ben Linus. 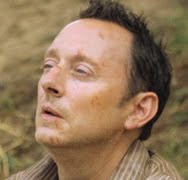 Sayid’s flash-sideways, on the other hand, merely rehashed his old story.  Nothing new was learned, either by Sayid or by the audience.  Oh, he’d kill for Nadia?  Shrug.  He had already shot himself for her back in season one.  So color me unsurprised when he shot Keamy, a character almost anyone in their right mind would shoot without a second thought.  This isn’t dramatic irony.  This is repetition.  Boring, bleak repetition.

Here, look at this chart I made.  It’ll probably make my point better than my paragraphs ever could:

If Sayid’s flash-sideways had included more dramatic irony, I might have bought his Island-side conversion to the Dark Side a little more.  If I had written Sundown, the chart would have looked a little more like this:

2007-SAYID THINKS: That no matter how hard he tries to be redeemed, he’s fated to be a murderer

WE LEARN FROM THE FLASH-SIDEWAYS: That Sayid never actually wanted redemption at all; he just wanted Nadia

HOW WE LEARN THIS: The flash-sideways starts the same way as the one we saw in Sundown, except Keamy DOES kill Omer.  Then alter-Sayid steps out of the shadows and says, “Well done, Keamy.  Here is your payment.”  And THEN he shoots Keamy in the chest.  The end of the flash-forward is at Omer’s funeral, where evil!Sayid comforts the bereft Nadia.  (This fake episode would get bonus irony points if Nadia said something like “Sayid Jarrah, you are a good person” before the credits rolled.)

My version of Sundown would be just as bleak as the real version, but—with the Power of Irony!—it would develop Sayid’s character more and make his turn to the Dark Side more believable.

I’m not saying that irony is the most important tool in a writer’s literary arsenal, although others might agree with that statement.  But Lost’s writers have long shown that they know how to use dramatic irony better than any other writing staff on TV—and dramatic irony only gets better and easier to use the longer a story goes.  Once you have such well-established characters with five seasons of backstory on their shoulders, adding little ironic twists and flourishes is a way to surprise the viewer, to make her cry, to delight her.

[Agree? Disagree? Want to continue gushing about how good Michael Emerson is?  Let loose in the comments!]

*Okay, the episode wasn’t perfect, writing-wise.  The “Ben Linus, schoolteacher” storyline arguably had a couple of holes in it, and, as the AVClub said, some of the dialogue was a little “on the nose,” as it were.  But, honestly, the rest of the episode was so good that I could overlook those little hiccups.  Your mileage may vary, I suppose.