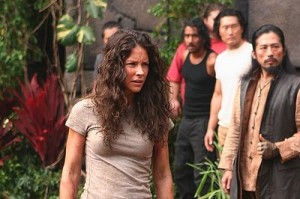 Sigh.  I don’t want to underthink this episode, but I need to get this out of my system before I do any true overthinking: This episode took away whatever little good will I had toward Kate’s character at the end of last season.  It wasn’t just the dumb crap she did that bothered me—although she did a lot of dumb crap.  For example, why is she going around L.A. telling random mechanics that she’s wanted for murder?  And then she goes into his bathroom, leaving him plenty of time to call the police?  And then she gets back into the same cab she carjacked—the one that clearly had its plates called in to the cops by the U.S. Marshal and the cab driver?  Dumb Kate.  Dumb.

Whatever.  It’s not Kate’s dumbness that bothers me.  That’s a character trait that the writers have developed in her for more than five seasons now.  At least she’s consistent.  Acting rash and stupid is What Kate Does.  (Get it?)

No, what bothers me is that, this episode, Kate drew other people into her dumbness, like some dumb black hole.  Like: What are you thinking, mechanic guy?  Are you thinking that if you help Kate out of her “bracelets,” as you call them, she will come out of the bathroom naked and bone you?  She will not bone you, mechanic guy.  She will not bone you.

And Claire!  Claire, why are you telling Kate your whole frigging life story and letting this evidently crazy woman give you a ride?  Are you nuts?  The show could have handwaved it by having Claire say something like, “I don’t know why, but I trust you, mysterious fugitive woman.”  But no.  Because when Lost’s writers write about Kate, they suddenly all become mouth-breathing morons who make plot developments out of thin air instead of letting them arise naturally from the characters, like they’re supposed to.

[Semi-related Interlude: When I saw “Aldo” (a.k.a. Mac from It’s Always Sunny in Philadelphia), I thought, “They should have had Sweet Dee on the Island instead of Kate.  At least It’s Always Sunny doesn’t pretend like Sweet Dee is a character we should respect and care about.”  Gah.] 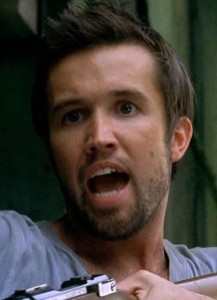 Okay, no more underthinking about Kate.  I’m done with my rant.  But, sadly, I don’t have much to overthink this week, what with this episode being pretty mediocre and all, but I can say that one main theme did stick out to me: the theme of trust.  In 2007World, Jack doesn’t trust himself, Jack doesn’t trust Dogen, Dogen doesn’t trust Sayid, Kate doesn’t trust Dogen and his “Other Others,” and Sawyer doesn’t seem to trust anyone anymore.  In 2004World, Claire inexplicably trusts Kate, Kate stupidly trusts the mechanic, the mechanic stupidly trusts her not to rob and shoot him, Claire trusts the woman who was going to adopt her baby (even though that turned out to be misplaced trust), and we all got to (amusingly) trust Dr. Ethan Goodspeed, nee Rom.  Are we supposed to be thinking, “Aha! In Bizarro World people are nice and can trust each other, whilst in Regular Island World people are in a state of anarchy and cannot”?  I don’t know.  If so, that seems a little silly, honestly.

Another kind of not-really-overthought thought I had was that this week’s episode had a lot of callbacks to episodes from earlier seasons.  We had Sayid being tied down and tortured, as he has been at least twice before (by Rousseau and by the husband of that lady he once tortured).  We had Infected!Claire setting coconut traps and running around with a gun like some kind of Neo-Rousseau.  We had Sawyer and Kate back in the house in the Barracks, and, of course, we had Sawyer sitting out on the dock where the submarine used to come, the place where he once sat with Juliet in 1974.

But that’s not actually what’s going on.  The 2007 callbacks are not done straight; everything is slightly different in the retelling.  For example, the last couple of times Sayid has been strung up and tortured, we (the audience) trusted him and sympathized with his plight.  This time, I was suspicious of Sayid the whole time.  (“Is he screaming like that because he’s really hurting?  Or is he really the Man in Black in disguise?”)  The last time we saw a Rousseau-like character, it was actually Rousseau, who had killed her infected crew and went mad after some wacko with a Hitler haircut kidnapped her baby.  This time around, the Rousseau-like character is Claire, who IS infected and abandoned her baby in the woods.  The last time Sawyer and Kate were together in that yellow bungalow in the Barracks, they were playing house and canoodling around like teenagers.  This time around, the circumstances have obviously changed a bit.  And you can tell the difference between this “Sawyer on the docks” scene and the “Sawyer and Juliet on the docks” scene from a year ago. 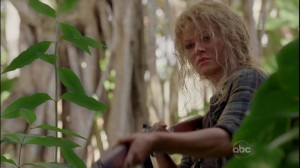 "Give me the peanut buttah. Now."

If the “flashsidewayses” are doing anything thematically (and I’m not quite sure they are, at this point), then what they are doing is showing how important the characters’ experiences on the Island are to them and to us, the people who watch them.  I don’t really care about 2004-Kate running around L.A. with still-pregnant Claire.  Even though seeing Ethan again was good for a laugh, what was the point?  Though the stuff happening on the Island in 2007 wasn’t all that interesting either (“Where are Locke and Richard?” I kept wondering. “Where is Ben Linus?”), at least the 2007 characters have substance to them.  These people, for all their faults have grown and changed over the past three and a half years.  That, to me, is the only good reason for the clever callbacks written into the scripts for the first two episodes of this season: to remind us how far they—and we—have come, and to reinforce that it is people’s experiences, not their fate, that makes them compelling and—you guessed it—special.

DOGEN: “Your friend… is infected.  He needs to take this pill.”

HURLEY: “Uh, so what happens if we don’t give him the pill?”

DOGEN: “The infection… will spread.”

(The ominous music that regularly precedes commercials starts in, but Hurley cuts it off.)

HURLEY: “Wait a minute.  The infection will spread?  What does that mean?  Spread how?  What kind of infection is this, anyway?”

HURLEY (growing annoyed): “Yeah, okay, what the hell does that mean?”

DOGEN: “If the darkness reaches your friend’s heart… it will claim him.”

HURLEY (walking off in a huff): “Forget it, dude.  Seriously.  I ask you a simple question, and this is the crap I get…”

[What do you think about What Kate Does?  Have at it in the comments section!  But no spoilers if you happen to know anything about the coming season!]