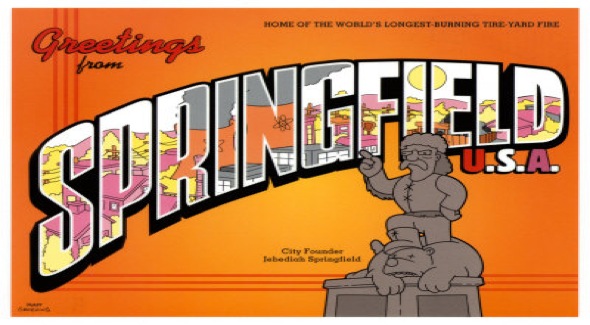 [Enjoy this D’OHverthinking It guest post from Trevor Seigler]

There’s an entire school of debate about which is better, The Simpsons or Family Guy. In my mind, it’s no contest; Homer and his yellow-skinned brood smoke the competition when it comes to comedy that comes from plots and not hilarious-yet-distracting cutaway gags. But the ultimate triumph of Groening and company comes from one simple fact: you have no clue where Springfield is.

Have you ever really wondered which state the Simpsons might reside in? Don’t lie and say that you haven’t; it’s a given if you were a Simpsons fan from early on, and the mystery of Springfield’s exact location is one of the more tantalizing aspects of the show. The writers have messed with us over the years, and the basic geographical construct of Springfield is a cornucopia of features that really don’t go together. Springfield has a gorge, easy access to the beach, a raging tire fire, an active waterfront section, mountains and a crippling sense of inferiority to Shelbyville. Speculation has run rampant that Springfield must be located in Matt Groening’s home state of Oregon, but the fact remains that we have no clue. And we like it that way.

Why is Springfield’s geographic anonymity so important? Because it frees the show from certain realities of the television/physical world, and that anonymity allows Springfield to stand in for all of the small towns and mid-sized cities that dot the American landscape.

Springfield exists, much like William Faulkner’s Yoknapawatapha County, as a fictionalization of a real world, one that is disarmingly familiar even though it’s entirely within the realm of imagination. Its geographic vagueness isn’t fantastical; things occur in Springfield much like they do throughout the rest of the country. Men work at jobs that they hate and drink themselves to excess in seedy bars where the regulars know their name. Women struggle either as housewives with boorish husbands and problem-child children or as career professionals questioning whether their jobs get in the way of their traditional roles in society. Children misbehave, create fantastical games and pranks to amuse themselves, and bury their insecurities from the world with bluster or book smarts. Authority figures are incompetent, especially when they’re asserting their positions in the social hierarchy. All in all, Springfield could be Anywhere, USA. And so it is. 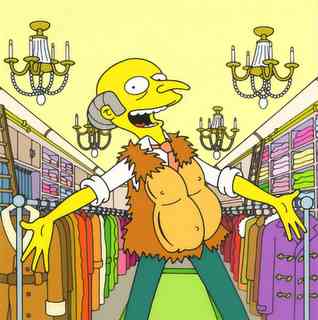 Every town's got one of these guys, right?

Now compare this with the two other animated shows that have inhabited the same timeframe as The Simpsons (and no doubt benefited by its ability to show profit in prime-time animation): Family Guy and South Park. Peter Griffin and his family live in Quahog, Rhode Island, meaning that theirs is a distinctly New England perspective on the world. They are definitely in blue-state country (side note: anyone else tired of the whole “blue state/red state” comparisons? Is there any place for it outside of an election year? Anyway, for the purposes of this article, I’m gonna have to grit my teeth and use it here). It’s not that the Griffins are liberal, it’s just that they reside in a state not known for its sympathy for the GOP. South Park is set in, well, South Park, Colorado, one of the reddest of the red states (despite the most recent presidential election). The viewpoint on each show is reflected by its geographical location: Family Guy’s underlying moral viewpoint is hard to peg down but most evidence suggests it’s a secular interpretation of the world (the Griffin clan has been identified as Catholic, but their adherence to Church doctrine is fleeting at best). Their gross-out humor could only come from the mind of a mischievous lapsed Catholic schoolboy, perhaps. South Park is defiantly libertarian, distrustful of all forms of authority be they government or religion, and their mockery of liberal favorites like global warming seems to suggest a closer alignment with Fox News than CNN.

The Simpsons, while decidedly liberal in its attitude towards certain aspects of society, has a far more traditional attitude towards religion than either Family Guy or South Park. Reverend Lovejoy and Ned Flanders have evolved from broad-based stereotypes of ultra-religious killjoys into well-rounded characters who aren’t defined merely by their faith (or in Lovejoy’s case, lack thereof). The family unit, never a cohesive one on FG or SP, is solid in Springfield, where apart from the occasional father-on-son strangling the Simpsons somehow manage to stay together and even love one another. Contrast the treatment of Meg on FG and Lisa on The Simpsons: Meg’s status in the Griffin household is that of a punching bag and easy font for jokes, while Lisa is a well-rounded, complicated little girl who has to make due with her boorish family while also desiring their love in spite of her intellectual gifts above and beyond that of her father. Perhaps the most moving episodes of The Simpsons are those involving Lisa and Homer trying to connect as father and daughter, because that’s real life: sometimes parents and children have to work at having a loving relationship, with failures on either side threatening to derail them.

So what does that have to do with geography, you ask? Springfield’s status as an “Everytown, USA” allows it to be all things to all people, in the best of circumstances. For every simpleton like Homer who goes through life in a drink-and-food-fueled ecstasy of small-town thinking, there’s a Lisa who tries to escape the doldrums of Springfield’s limited cultural entertainments and strive for something better. Springfield is both the worst and best small-town aspects rolled into one, a metropolis where we can see ourselves in microcosm or see our neighbors in some of the more ridiculous characters on display. Who doesn’t know a Barney or a Moe, a Professor Frink or a Duff-Man? In the absence of a fixed point of geography, all of these characters can grow organically, not beholden to the cultural prejudices or assumptions that come from hailing from a particular dot on the map.

It’s not just that Springfield exists in a geographical void; apart from the now obligatory “The Simpsons go to (insert real place here)!” episodes, the Simpsons exist in a world of their own. It’s not just Springfield: there’s Shelbyville (the rival sister city which always seems to be just a little better than Springfield), Capitol City (a glamorous metropolis that suggests a particularly well-sized state capital with the cache of a New York or Los Angeles, as many aspire to live there), and the various small towns noted in “Marge Vs. The Monorail,” all of which are reduced to ghost towns by Phil Hartman’s show-tune singing huckster. Like Faulkner’s mythical Mississippi county, the world of The Simpsons is not just that of Springfield; there is a whole world created for them to inhabit, where fiction and reality intertwine to show us the more ridiculous aspects of our own culture and make it okay to laugh at them because we’re seeing it through a lenses colored garish yellow.

Perhaps the best joke about the entire geographical placement of Springfield comes with the Capitol City’s baseball mascot (now a state senator) introduces a motion to remove the Confederate battle flag from the state flag, as “this state wasn’t even part of the Confederacy.” That means Springfield can’t be in my home state of South Carolina (though interestingly enough, my home town is in the shadow of a nuclear power plant, an aspect that makes Homer’s incompetence as “safety inspector” a little less amusing when you wonder if his real-life counterpart might be the difference between a smooth-running plant and a nuclear holocaust). But then again, it’s not a particular state or region; it’s a state of mind. You can look at a particular episode and say “that’s so Michigan” or “that would only happen in Nevada,” and the great thing is that you’re probably right. Springfield is every small town or mid-range city that you’ve ever been to, where people cling to religion even as they doubt its tenets, where life isn’t always like a Hallmark card but there are moments when it can be, and where the American family (abused and misused by conservative killjoys who want to return us to a nonexistent “good old days” and which actually doesn’t look as stable as it once did) somehow survives the worst of times with humor, understanding, and strangulation. Springfield is us, we are Springfield; in a fictional world we recognize ourselves and our society. That’s the achievement of the best fiction, to create a convincing portrayal of the world we live in via the human imagination and grounding in reality. So it is with Springfield, truly a state of mind.

[Do you have any theories on where Springfield is? Sound off in the comments!]

Or read more from… Featured, TV, d’ohverthinking it, family guy, fictional places, south park, the simpsons, where is springfield

6 Comments on “Springfield, USA: A State of Mind”