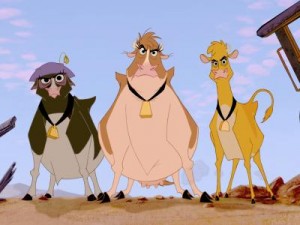 It was only five years ago that Disney ran up the white flag and did the unthinkable: it shuttered its 2D animation facilities. This is the Walt Freaking Disney Company: they invented animated movies as we know them. But a series of flops (Treasure Planet, Brother Bear, Home on the Range) at the same time as Pixar churned out a string of instant classics was too much for the Mouse House. They decided that the public clearly wanted computer animation, and that’s what Disney was going to give them.

Except that didn’t work either. 2005’s Chicken Little didn’t even make back its budget domestically. So in 2006, Disney took the if-you-can’t-beat-’em-join-’em route, purchasing Pixar for $7.4 billion (which actually seems like a steal to me). The Pixar people were suddenly in charge of Walt Disney Animation… and the first thing they did was get the 2D animation department back up and running.

John Lasseter and Co. were betting that audiences hadn’t stayed away from Home on the Range because it was 2D. They had stayed away because:

a) It was lame, but more importantly…

b) a trio of sassy cows wasn’t what audiences wanted to see from Disney.

Anyone who’s been around a little girl in the last twenty years knows that the old Disney films still resonate, maybe even more than the new Pixar stuff. In 2009, the Disney Princess line of merchandise netted over $4 billion for the company. In a way, the continuing popularity of those 2D films is what enabled Disney to buy Pixar.

So when they set out to make The Princess and the Frog, they had a tricky task: produce something that recreated what people loved about the old Disney movies (especially the early-90s triumvirate of Little Mermaid, Beauty and the Beast, and Aladdin), but also something creative enough to get consumers back into the habit of reflexively going to Disney movies. It’s sort of like making a Bond movie–you need to stick to the formula, but also keep it fresh.

So how did they do it? Well, let’s go to the chart. (And by the way, bigtime Princess and the Frog spoilers begin now.)

First of all, when I say “Magical Disney Princess Chart,” I don’t mean the princesses themselves are magical. I mean the chart is magical. But then again, aren’t all charts? And by the way, this is a work in progress, so if anyone has a clear sense of how long Belle spends at the Beast’s castle, let me know.

Okay, here’s the big picture. Most of these princess movies hit the same notes. The motherless child, the dream of another life, the whirlwind courtship (usually a matter of days), and the HEA (happily ever after) in a beautiful castle. Pocohontas, however, messes with the script: no HEA. Just a sad goodbye as a wounded Mel Gibson sails back to England. Then Mulan goes completely nuts. For starters, both her parents are alive and well. Instead of dreaming of another life, she only wishes she had an easier time conforming and being a normal girl. And whoa, there’s no love. There’s a love interest, but he thinks she’s a boy for most of the movie. Don’t get me wrong, I like Mulan a lot. But Pocohontas and Mulan are the least popular of the movies on this list. Clearly, The Princess and the Frog is trying to get that early 90’s mojo back… while still doing things a little differently. 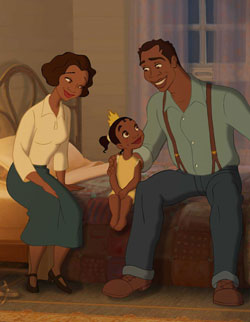 The Disney Mom Gets to Live!

This is big, big news people. It’s been a long time since a Disney animated character had a mother in her/his life. And that was probably Bambi.

I’m not quite sure what the Disney company has against moms. There’s an interesting theory that the death of Walt’s own mom in 1938 influenced all his later works. In any case, Disney kills off the dude this time around. Tiana’s dad, briefly voiced by Terrence Howard in an early sequence, dies in WWI. Since he was the one who taught her how to cook, his absence seems to solidify her desire to open a restaurant. Which brings us to column two…

Finally, Someone With a Specific Dream

Snow White had a vague sense that “someday my Prince will come.” Cinderella just hoped that one day she wouldn’t have to mop so much. Aurora sighed over a mysterious man she met once upon a dream. Ariel wanted to be where the people are, Belle wanted more than this provincial life, Jasmine wanted to see life outside the palace walls, and Pocohontas was always dreaming of what’s around the riverbend.

None of these girls have any actual plans for their futures–they just hope something will happen to them (and it does).

Tiana is different. She wants to open a restaurant, and she’s working two jobs and putting aside all her tips. She even knows exactly what building she wants to buy, and she can hardly wait to fix the place up all by herself. The other Disney princesses are off in the clouds. Tiana has dreams too, but she’s working her ass off to make them happen. She is the change she’s been waiting for.

16 Comments on “The Princess and the Frog: A Comparative Analysis”