On the Court with . . . Hakeem Olajuwon is one of those books.  Yeah, it’s one of the second kind of books.

So, when one of my friends managed to score five copies of it in a Yankee gift swap (along with matching Captain Picard and Commander Riker commemorative plates and three bags of Chocolate Reisen), it seemed doubtful anyone would read it. But here at Overthinking It, doubtful doesn’t stop us. We specialize in taking the doubtful and making the dubious.

Plus, there were those two words at the top: “Matt Christopher.”  If those words don’t make you cry out in joy, read on to find out what you’re missing.

More on the Dream Shake as rite of passage, the mid-90s perception of Islam, and the zombie Tom Clancy of Little League Baseball, after the jump! 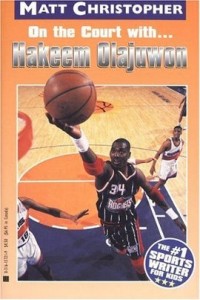 Before we delve into our pseudo-fictionalized, 111 page hero’s journey from Dream Shaken to Dream Shaker, a brief word on Matt Christopher. I am among the class of overthinkers who nowe Mr. Christopher a special alleigance. There are more of us than you think – four or five other yankee swap participants were at least as excited as I was to see his name on the book; this is a greater degree of excitement than is reserved for a more straight-up famous writer for a similar audience, like R.L. Stine.

At some point, an elementary school teacher or librarian approached us and said, “Here, read this book. You’ll like it. It’s about sports.”

There’s so much subtext here – so much unspoken. We are immediately subsumed into a certain gender-normative reality, of course, but let us cast down our buckets where we are for the moment. As boys, books of apparently require mitigating factors in order to attract our interest. We are assumed to be bored and alienated by books, and yet would benefit so much for reading. So, there’s an exclusion.

But, in the way of Pandora’s Box, the box of troubles comes with it a note of hope – just as “It’s about sports” speaks to how reading and literature alienate us (and does it not, for so many, even now?), the same statement says, “There is something here for you.” “This is a book on equal standing with the other books in this elementary school library that invites you to be yourself and like what you like.” even “Books are about things. Some books are going to be about things that matter to you.” There is a lot of wisdom in handing a sports book to a young kid – boy or girl, provided of course it is something they identify with and like personally.

And you simply don’t do sports books for children without Matt Christopher. Matt Christopher wrote more than a hundred short novels/novellas for youngsters on almost every sport in existence in a career that spanned from the mid-50s to the late-90s. My own elementary school library was not the only well-stocked with them – I know there are others like me among the readership who have read the likes of Little Lefty, Soccer Halfback, Dirt Bike Racer, Catcher With a Glass Arm, Johnny Long Legs, The Kid Who Only Hit Homers or any number of a number of others.

In calling upon us to hone academic and intellectual skills for the enjoyment of things we choose to enjoy rather than those things we believe we ought to enjoy, Matt Christopher is one of the greater ancestors of overthinking.

You may expect sports books to read something like an NFL Films reel – terse drama and layered intensity loaded into every moment. Describing the sweat dripping off the hurdler’s nose as he waits in the starting blocks. The strain of muscles. John Elway leaping over the defense in the super bowl is a half-step slower than an angel coasting over the surface of the primordial, unformed earth. So much of sports cinema ventures into this baroque Henry James-esque world of overwrought intensity. That’s what you’d expect, anyway, and you get that in some sports. But you sure don’t get it from Matt Christopher.

Matt Christopher’s style reads like Ernest Hemingway, except you replace all the discomfort with the human condition with a sincere love of the surface details of sporting events. Short declarative sentences. Brisk experience portrayed briskly. 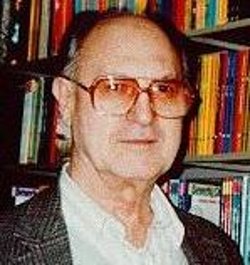 Of course, this is a book for children, so simplicity is important, but did Matt Christopher write the way he did because he was a children’s writer, or was he a children’s writer because he wrote the way he did? The evidence I’ve read would imply the latter – that he tried a few different types of books, and this was by the far the one at which he was most succesful. This is an important note about form and function – it is a familiar practice to look at a hole and try to figure out what peg fits in it, but sometimes harder to look at the peg and figure out which hole it belongs in. But enough about that; this is a children’s book!

Take this passage from Johnny Long Legs (my first Matt Christopher book). The book is about basketball, but, like most Matt Christopher books (and, unsurprisingly, like in On the Court with . . . Hakeem Olajuwon), there’s a fair amount of buildup before the main character actually plays the sport shown on the cover, at least in the way it is meant to be played.

The boys pulled the toboggan across the snow-packed road to the hill, climbed all the way to the top of it, and then rode down, Johnny sitting behind Toby. The wind lashed against their faces, the sound of the runners sang in their ears.

The field was long. The boys coasted nearly to the edge of it, close to the fence, and then started to pull the toboggan back up again. One hundred feet away two guys were cruising along briskly on a snowmobile.

‘Am I glad my dad and your mom got married,’ said Toby. ‘I was getting tired of Grandpa’s cooking. Potatoes, hamburg, and hot dogs. You get tired of that after a while.’”

The book doesn’t just use sports to describe other sorts of human experience, it also uses characters and storylines to explain how sports work. The toboggan has metaphorical qualities, but there’s also a degree to which the characters are present to support the description of tobogganing. And then it seamlessly flows into fairly heavy discussion of classic childhood problems.

My favorite, trademark Matt Christopher style point is how many times he makes sure to inform you of the specific score of the game being depicted. You may not learn much about a particular game, but you will learn that the Bobcats or what have you won it 61-52. You don’t know anything about the “two guys,” but you do know they are precisely one hundred feet away, and that they are riding a snowmobile.

3 Comments on “Yankee Swap Book Review: On the Court with… Hakeem Olajuwon”