When I started the initial Overthinking for my Paul Verhoeven Week Basic Instinct Guest Post, the thought process was more or less as follows:

But lots of things are happening in Basic Instinct, and only one of them is misogyny – so why essentialize? Keep reading for a brief rundown of the more interesting plot points, some feminist issues as a jumping off place for (what I hope is) more subtle criticism, and of course the obligatory reference to vagina bugs/Starship Troopers.

The problem with analyzing Basic Instinct from a strictly feminist perspective is this: look closely at the treatment and behavior of any female character in this movie and poof! You have an open and shut case (that’s detective lingo) of vagina phobia and the predictable accompanying feminist and/or queer theory issues of gender identity, patriarchal narratives, and misrepresentation of the oppressed and/or minority group in question. 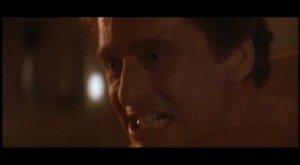 These concepts are pretty much the conceptual Rat Pack of feminist and queer theory, and while I happen to agree with the irrefutable math demonstrated in the intro, fleshing out that argument alone in a discussion of this movie would have resulted in nothing more than a feminist Mad Lib. Maybe okay if this were Underthinkingit.com (or a first-year Women’s Studies class at Dartmouth), but not really sufficient here.

And, after having seen other Verhoeven movies, it’s clear that while he has, or maybe just depicts, some extremely screwy ideas about women, he does so in a pretty smart, savvy way that indicates more progressive views than I was initially willing to credit to him.

Spoiler alert! A brief and in no way biased summary of key plot points is probably helpful here.

Nick Curran (Michael Douglas), a troubled cop with a troubled past, investigates the case of a former rocker recently found doing his best impression of a colander while tied to a bed frame with a white scarf. Blood’s everywhere, a bloody ice pick is found at the scene, and homeboy is extremely not-alive.

It’s discovered that Catherine Trammel (Sharon Stone), a blonde (this is important!) crime novelist, was the last person seen with him. The cops go to her house, whereupon it becomes clear that:

Nick skims Catherine’s book, which is about a woman who stabs her lover to death with an ice pick while having sex with him after tying him to a bed with a white scarf. The cops bring her in for questioning; Nick, Dennis “nice dinosaur” Nedry, and a bunch of other cops interrogate her in sorta rave-y lighting; she denies everything and also shows them her bare ladyparts, inspiring a great deal of occasional music and also almost winning the move a then-dreaded NC-17 rating, despite being nearly indistinguishable (at normal playback speeds, anyway) from nude-tone granny panties due to hair color and lighting issues.

Nick starts an affair with Catherine, even though he thinks she may kinda want to kill him and/or people in general. They have hot sex during which she ties him to the bed with a white scarf and he’s all, “I might get killed but whatevs, for I am detective dangerslut!”